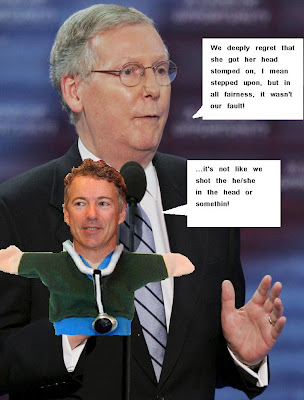 I've mentioned before the four levels of stupidity. Let's recap.


Well, apparently there is now a fifth level of stupid: Kentucky Stupid. This involves a guy named Profitt ignoring a huge fucking suite of behaviors that can be used in a confrontational situation, and just going right for the violent reaction. And then providing weasel arguments about how (despite supposedly espousing a conservative policy of personal responsibility), "it warn't actually mah fawlt kausin' the po-lice shood stapped in and kep me frum doin thet".

Is it fair to call it Kentucky Stupid? Actually, I'm quite fond of Kentucky and its inhabitants. Some of the hottest babes I've ever seen were down there. And when I was in college at IU, I subscribed to the Louisville Courier-Journal , and found the paper to be consistently well-written, the articles cogent, the coverage dang near interstellar in its scope.

So, no, it's not fair to call this behavior Kentucky stupid.

However, I do recall a time when a woman from Kentucky confronting a particularly stupid individual, poking her finger into his chest and telling him, in that particular dialect that holds more dipthongs per syllable than most:

Beleive me, when you are called stupid by someone with that accent, you are really fucking stupid.
Posted by John Kurman at 8:14 AM