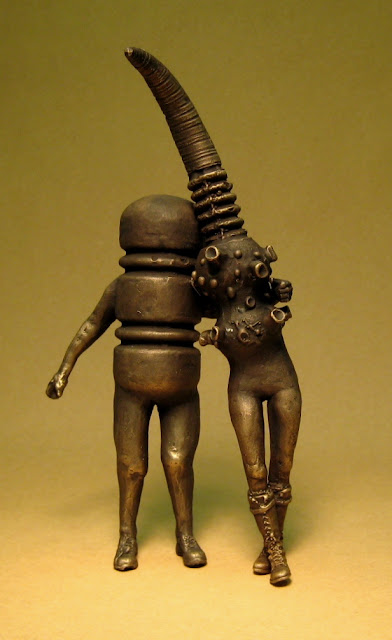 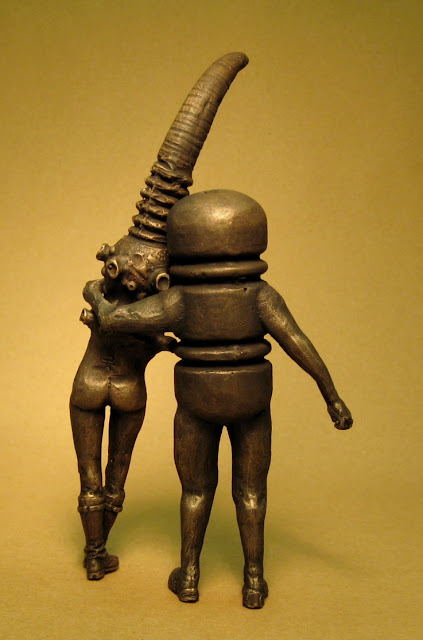 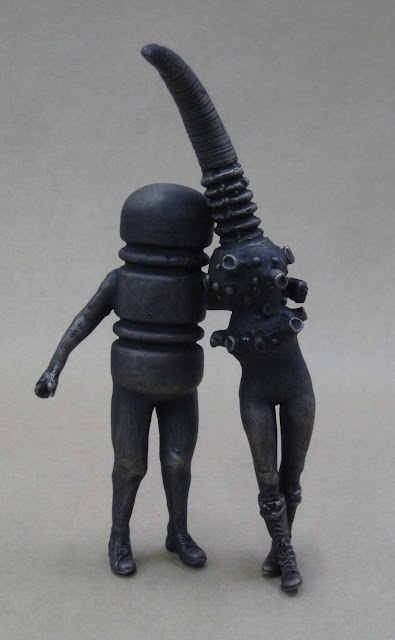 Trump is the Tao of a failed state

Mr. Nulan: "a single-handed takedown of the American elite establishment, and its two-party, one-ideology puppet show - is nothing less than a genius"

At eye level, with the election of Trump? It's all tragedy or triumph. And from ten feet up, just like the election of Obama, and W before him, and Clinton before him and so on and back. And I see exactly zero of the elites shivering in their boots.

The normalized mythos is that people wanted change, and that's almost true. People wanted things to change, just not in a forwards direction. The expressed opinions of Trump supporters I have talked to - and those in Hoosierland are legion - is that they would have voted for Captain Kangaroo if he had run. Trump was irrelevant. Trump was a buffoon. But Trump was not Hillary. Worse still fro Trump, he was consistently recognized as someone who will probably fuck the country up, but they voted for him anyway. They knew they were bullshitted. So, Trump a genius? Sure, at bullshitting. A bullshitter is someone who lies to your face, knows it's a lie, knows you know its a lie, but does it anyway. Trump supporters are not stupid, and they have no illusions that the elites have been dislodged, nor that Trump is going to look out for them.

Let's move to one hundred feet up. The press interview after Trump's personal meeting with Obama showed a very nervous Trump. Nervous? Hell. Trump was terrified. I suspect the poor old codger actually squirted a stain into his Depends. Some various scenarios for the reaction are:

1) Obama showed Trump The Film - the JFK assassination film which basically informs all presidents that that there are some  puppet strings they should never pull back on. (My take? Entertaining but unlikely).
2) Obama took Trump to the woodshed, and basically laid out how, if Trump thought he was humiliated at the Press Corp dinner in 2011? A humiliation that will burn Trump's ears for the rest of his life? That was just a gentle cuffing. Wait until he assumes the office of president, and experiences constant daily, sometimes hourly, humiliations from just the brutal reality surrounding the office. (Again, entertaining, and certainly somewhat likely, but not sufficient).
3) Trump was introduced representatives of the Oligarchy, and found out you need to be a trillionaire to be in the club, and he ain't in the club, won't be in the club, so suck on that, little man. (Again, entertaining, but unlikely).
4) We are ruled by evil aliens since 1947. (Not all that entertaining, but cannot be ruled out).
5) Ah, well, for 5) we have to ascend to a thousand feet or higher.

Item: Trump was elected by 25% of the vote. Hillary 26%. None of the Above 49%. 90 million eligible voters did not give a fuck. Hardly a takedown, is it? The majority of American voters have not voted in elections since 1960. Americans have been cynically apathetic since at least 1960. They perceive themselves as fatalistic and essentially powerless, and  that's even before the coup d'etat of '63. It's only the deranged extremists who think they drive the car.

Entertaining Ironic Aside Item: The United States of America is the Milton Berle of superpowers. (background, Milton Berle purportedly had a massive cock, and had to show it off as often as possible to anyone he could get to look at it). Meaning: the US of A has the biggest dick on the planet, and is still insecure about it.

Item: A 2015 gallup poll found that 72% of Americans expressed confidence in the US military. 33% in the Presidency. 32% in the Supreme Court. 31% with confidence in pubic schools. 23% with confidence in the criminal justice system. 8% confidence in Congress. These numbers have all been in steady decline since 1960. Americans have, since forever, said the country is going in the wrong direction. Whiners? Or more clear sighted than the average dipshit pundit wants to give them credit for?

The fact is, even after the steady dismantling of FDR's Big Government paternalism, the US military is, ironically, the last vestige of FDR's system. It is the substitute welfare state. I hypothesize that this is due to the fact that the US of A is a failed state. Oh, true, it's not like present day Venezuela, not like late '80s Soviet scarcity. It's a different type of failed state.

American foreign policy has been forced to see everything as a nail, as the military hammer is the only tool remaining in the tool belt. And how well has that worked? Nation building has been a disaster. I would submit that a large part of the disaster consists of American trying to the do the right thing. (The right thing being making people behave just like us). We are a big friendly bumbling giant that, after oops did I crush your house? Let me fix that, and proceed to wreck the whole town. We'd have done better to go in, kick ass, and leave the wreckage and rubble to them to rebuild as they saw fit, rather the Pottery Barn approach to foreign policy.

Quite frankly, this period looks exactly like the Period of Warring States in China, the aftermath of the Romans, the failed states of every single regime change we see throughout history. We are in, what year 14? or year  72? Year 118 of the Forever War? A war that is increasingly unrestricted? Not contained within the usual jus in bello restraints?   Well, fear not. The Forever War can't, due to carrying capacity, last forever.

Let's shoot up to a million feet. Too many people, wanting too much stuff, using up more of the land and resources, and pumping way too much shit out. Shit in every form and fancy. 60% of the coral reefs gone. 90% of fish stock gone. 90% of all life lives in the ocean, and between global warming and ocean acidification we are looking at an Eocene/Miocene extinction event in 40 years times, probably less. Drama queen spaz antics on my part? Sure, if I'm wrong. Bet you I'm not.

Because here's the deal. the thing that Obama told Trump is: we've already collapsed.

Let me repeat this for all the corpse-licking knuckleheads who nuzzle their grisly muzzles into the sticky rotting crevasses of the world corpse, the people who see Mad Max as exciting!, the people who choose to ignore those parts of our collapse that are not to their liking, the people who fap to Armageddon, the people who make smarmy remarks about "rearranging deck chairs on the Titanic".

Titanic done sunk, chumps. It's life boats from here on out.

And the job of those goons and stooges of the .01% is to make sure to break the hands and heads of those 99.99% desperately clinging to the life rafts. The .01% are quite frankly terrified of the mob only because they fear the lifeboat being swamped, but as far as life goes, you, me, your kids, my loved ones, we are all expendable to them. Fuckers.They hire the likes of W and Obama and Trump and REagan and Nixon, and we can't. They will keep us out of the life boats.

To parahpase Bruce Sterling, the collapse is here. It's just not evenly distributed. Yet.

Now, a billion feet up. Is it too late? It's never too late. Too late for us and ours, yes. But maybe not so much a for far future generation. Because we are just ape-shaped bugs after all, there is a good chance that we have moved out of the Stability regime and moved into Swarm.

There's a chance. The only worthwhile part of human life is redemption.
Posted by John Kurman at 9:36 AM 3 comments:

We Are So Fired

One thousand years from now, history will record - in Mandarin - that a minor temporal power elected Ronald McDonald as its leader. The only remaining piece of data to confirm that the orange haired clown existed power was a gif.

Seriously, I really don't give a crap if #Crunt is president. I understand how the average butthole would think that real change would happen under him. It won't, but I get what they want to see happening. Anyone who thinks this is a triumph of the common man, and that #Crunt isn't a puppet of the Deep State and the Corporate Collective should move to California where they can smoke all the dope they want.

Between him and Hillary, it was a choice of a shit sandwich with mustard or mayo. But with ALL THREE branches of government in the hands of these shivering little bunnies, dropping pellets of stupidity and fear, these fucking tards that cannot see beyond the ends of their short little dicks, is something that is going to be very very interesting to witness. If my livelihood were less affected, I'd even be amused.

But, bottom line, what we have to signaled to the world is:

Fist Bumps All Around

No, this has nothing to do with the election. This has its very own narrative which is much cooler, and a hell of a lot more pleasant than the current American situation. Robots, or alien robots, and humans cooperating and getting along and celebrating. 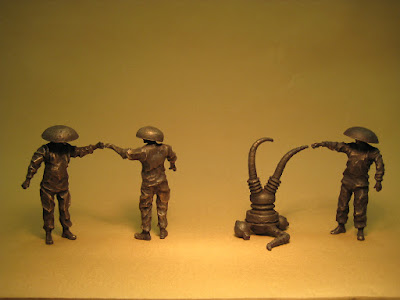 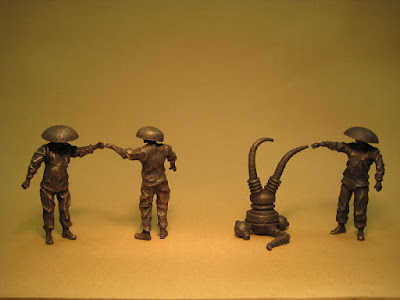 I like these smaller figures. They provide an emotional intimacy that the larger figures cannot provide. I believe I will continue at the 1/6th human scale.. until I'm bored.
Posted by John Kurman at 6:13 PM No comments: