Cannibalism - A Lot More Common Than We Are Comfortable In Admitting

We have been inculcated in the value system that cannibalism is morally repugnant, and yet, that really hasn't stopped the practice altogether.

In the West, with the arrival of the Enlightenment and the Protestant Reformation, we have divided the world into Christian and Cannibal: Civilization and Savagery. (Please ignore the fact that the fundamental sacred ritual of Christianity involves the consumption of  flesh and blood). The idea, you see, is that the liberal notions of individual dignity somehow preclude from sane or rational behavior the idea of eating each other.

Of course, we still practice cannibalism, but we do it in the marketplace. People, as useful commodities, are consumed. Labor and ingenuity are extracted from them as soon as is useful. People have value right up until they cease being productive. Children, of course, as future labor resources, are treated as valued objects. (Although, with the coming biotech revolution, newborns and fetuses will no doubt be put to work as well).

None of this, of course, is new, but I think the marketing strategy for modern denial of modern cannibalism is fairly modern (and by modern, I mean in the past 500 years? since the advent of globalization).
Posted by John Kurman at 7:40 AM 2 comments:

Customer relations at the counter, traffic flow to and from work, just in time inventories at the temp jobs, the information arbitrage of contractors and in-house added value services, "I know a guy that knows a guy" type of stuff all look a lot like a neural network in continuous cycle.

W. Ross Ashby, creator of the homeostat, when talking about cybernetic systems, often made the point that the environment is an active participant in the feedback loop. Well, that's obvious.

A lumberjack chopping down a tree can't do much without the tree, But is the tree an active participant? Ross would say yes. The lumberjack observes:orients:decides:acts based upon the attributes of the tree. He modifies his axes swings based upon the chunks that fly out. The tree is not going to drop chunks exactly the same each time. There is contingency involved. He modifies his swings and positions when it looks like the tree is about to come down. Don't want to have the tree fall on you, so yes, the tree, the environment is an active participant, adding that fun little nonlinear enhancement to the feedback loop.

(This is what butthole social Darwinists ignore that their peril: innate virtues involved in fitness are less than half the equation, Only the fittest survive for that environment. As the environment acts upon the actions of the individuals, so one can, in a fitness seascape, make the right choice at the right time from position of the right circumstance, and end up at the bottom of the trough from the crest of the wave. WIPE OUT!)

As such, there is no such thing as a competely stupid person. Actually, there is, but under the demands of our particular universe, completely stupid is completely dead.

Some people have a whole houseful of smart, and just a closet of stupid, while others... the opposite.

We obviously utilize that. One can have only a closet full of smart and a house full of stupid, but by interacting with others, using the ultrasocial network we ape-shaped bugs have developed, take advantage of others who are not so stupid.

I do it both ways all the time. I, in fact, know given my current circumstances, that there are some not so stupids out there looking out for me, which is why I landed this temp job,and also why I have an interview with an art foundry.

If it wasn't so nice, I'd probably be paranoid.
Posted by John Kurman at 9:07 AM No comments:

I got a temp job working behind the counter at a retail metal outlet. It's a franchise where you can buy metal. I haven't done counter work since college.

I've been working there for three weeks, and so far, out of the hundreds of customers I've dealt with, I've only had to deal with two assholes.

The guys I work with are all good guys, and the boss has asked me to fill in when needed, as he considers me "a good fit".  Well, I try to be patient, polite, considerate and helpful, and I guess that's what you have to be if you are a counter guy. Everyone is in a hurry, needs instant gratification, but I've been told to just relax and not let them rush you. That advice came from Phil, the other counter guy.  Phil pretty much runs the day to day operations, so classify him as non-com, staff sergeant. Phi's a good guy, funny guy; therefore, smart guy. Interesting character, like most people I've dealt with since working there.

The one most recent asshole customer I would classify as a pufferfish, an angry pissy little empty shitbag.

He likes to threaten. Threats are illogical.

If this were a samurai movie, he's the scared little shopkeeper constantly worried that he will lose his small piece of capital. He threatens and bullies the underlings, but if anyone stands up to him he collapses. And he toadies to superiors. It doesn't help he has that whiny nasal south side of Chicago dialect that makes me want to punch him in the face.

I'm of an age now where I really don't have the time and patience to put up with people's shit. So when it got to the point where he was just too much of a whiny little bitch, and I knew I was going to tell him to fuck off, I turned him over to Phil.

Phil is a pro, and had the guy settled down in about fifteen seconds. After Phil got off the phone, he laughs and say "I could see the smoke coming out of your ears".

He was right about that.

We have also had a ton of people who are just really good, really colorful characters.

I had one middle-aged black woman come in wanting to buy an 8" x 10" plate of inch thick steel, because she had to go do business on the south side. I discouraged her from buying it. It would have weighed, like, 40 lbs. Actually, I pretty much treated her like she was my mom, as gently and compassionately as I could. She was from Evanston, which, like progressive Oak Park, is pretty well integrated. (Chicago, third after Milwaukee and New York City, is a severely segregated, physically walled off racist city). Rather than try to assuage her fears, I googled a bunch of places where she could buy a protective vest.

A lot of the white guy customers are bigots. I was uncomfortable with some of the things I heard.

Well, this is America, and you are allowed to express your opinions.

I just figure these bigot types are limited, because by limiting their behavior according to stereotypes, they cut way down on their options and opportunities in dealing with people. I also have to assume they feel they are in a private space where they can vent, and perhaps outside of this cracker barrel venue, they treat others differently than how they express themselves.

The vast majority of the customers are skilled laborers, machinists, fabricators, etc. What those gentleman snobs the Founding Fathers would have considered "lowly mechanicks". Possessors of only mere skills, labor, and ingenuity, and not proper men of property.

The Founding Fathers were assholes.

It's amazing how, despite the enfranchisement of so many into our supposed democracy, there is stilla stigma attached to working with your hands. These people, of course, have my utmost respect. They know so many things about bending material instrumentality to their will I am quite frankly in awe. The stories they tell sound braggadocious and triumphal, but they are really problem:action: result stories. I know that, should civilization as we know it end tomorrow, these guys are guys you want to hang out with.

That's about it. I have two interviews next week. One at a art foundry, the other at a furniture fabrication place. I'll let you know how it goes.

Only Sporadic Reportage For Foreseeable Future

So, I'm an idiot. I've known for some time that I cannot afford my current job as studio technician. Between the increasing cost of living and having my hours cut back (not to mention lack of a raise), its just impractical to continue this.

So, way back at the beginning of June, I tendered my resignation effective August 1st. (Thinking, of course, that by this time I'd have a new job).

Well, I don't have a new job. Many people, including myself, would say I am an idiot for not securing a job before I resigned. Yeah, well, I'm an idiot.

I do have a couple of gigs that will get me through until October. And I get to keep my bronze casting instructor's job until the end of the fall semester. After that, the new lab tech takes over.

Keep in mind, this isn't a sob story. This is a realization that the art career just ain't going to happen, even with a supplemental job, and so I got to go get a real job once again. Oh boo hoo.

If I think of something to say, I'll write an essay on my laptop, go to the library and publish. Otherwise, I really didn't have anything to say.

We'll see how this works out.

In the meantime here's a little something I cast and cleaned up today. Yes, that's right, I made it in one day. 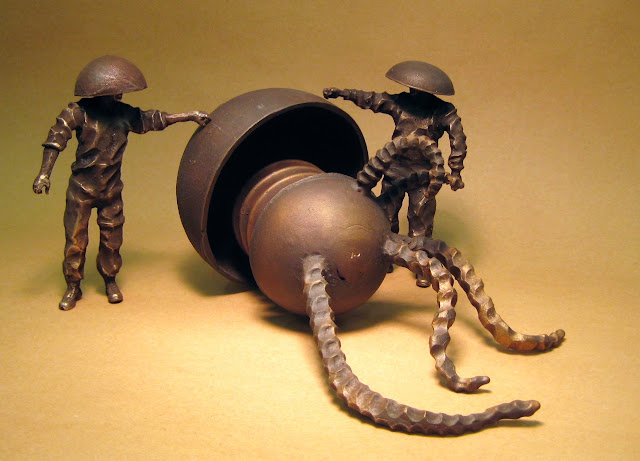 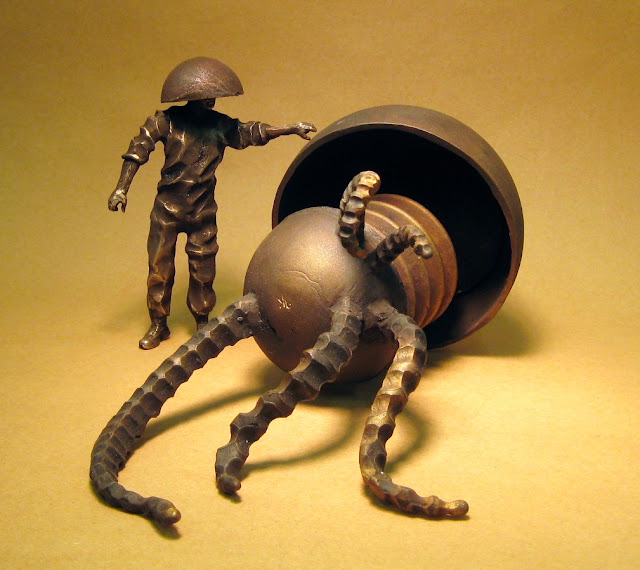 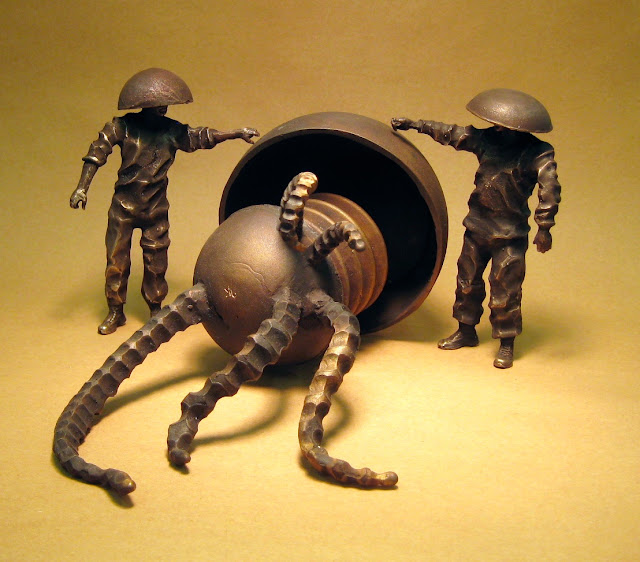 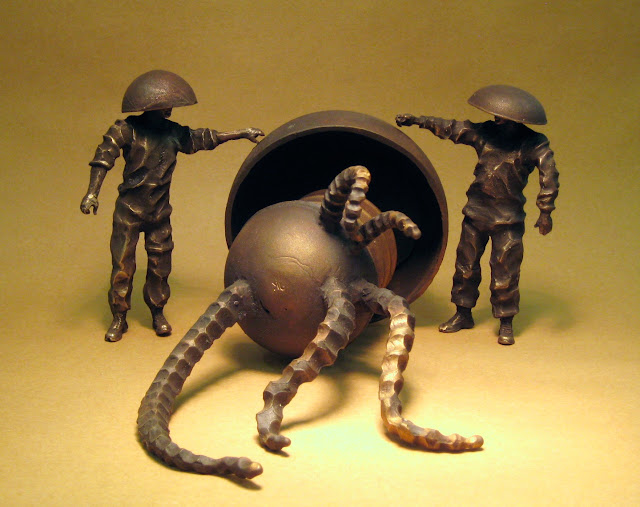 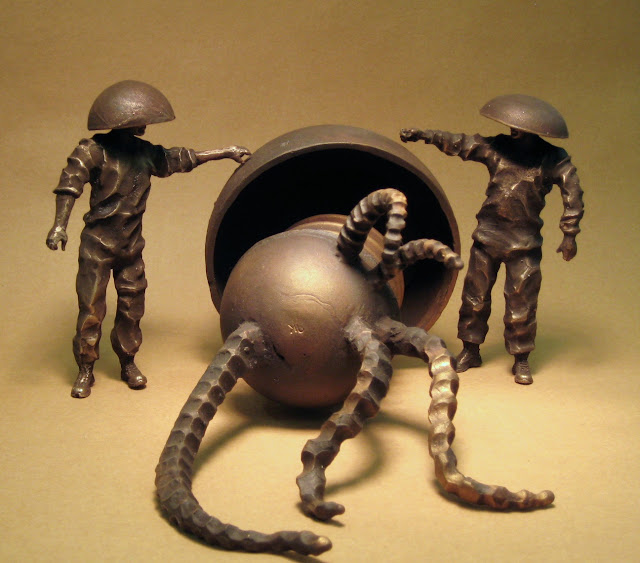