A Pendant for Hope

My great-niece is graduating high school and off to college. I asked her if she needed anything.
"You're getting gift money, but anything else? "
"Make me an amulet"
"Hon, I'm not religious or superstititious"
"Do your best".
I took an old design I liked, cast it in silver, and then started beaming power into it, for lack of a better word. I figured I'd be better at cursed objects to ward and protect rather than lucky charms, So, I imagined pumping evil into that silver. A protective hate to surround and shroud my kin.
Thank goodness for the internet news. That provided plenty of evil to pump into that amulet. I would grip the silver in the palm of my hand and rage at events and think pure evil (but with an algorithm that excludes the precious wearer).
I gave her the amulet and told her I pumped a shit ton of evil into it to protect her. She put it on and grinned and hugged me.
It was a perfect Uncle Fester with Wednesday Addams moment.
Posted by John Kurman at 6:51 PM 2 comments:

I got my followup with the radiation doctor today, and here is the possible outcome after having a proton blast slammed into my right eyeball.

Short version? The tumor will shrink and die over the course of about a year and a half. It is hard to say what my eyesight will be like long term,but right nowit is like looking through a vascularized Sargasso Sea of tentacles and frog's eggs.

Longer version. Death and shrinkage of the tumor really isn't going to start until around May or June. Seriously? I impatiently asked. And then the tumor will slowly shrink and die down to maybe a 2 millimeter vestigial upside-down mushroom maybe a year from now, year and a half. .

The vision outlook is not so clear. Last visit to the fantastic retinologist it was determined I had 20/100* vision in the right eye. 20/20 in the left. (While we were about it, I asked the nurse to test my left eye without glasses and it was 20/25. That's not bad). There is going to be scarification of the macula (the face and color part of the retina), and minimizing the damage is the strategic plan. My guess is, based upon occasio0nal clear patches I see when the tumor sways, that the vision is still there. If we can keep the scarification to the tumopr stump, I just lose lower visual field. That's the hope, but I could still lose the eye.

Quality of life? I've essentially lost the eye, behavior and navigation-wise. In most cases, I close my right eye to operate better. I've debated wearing an eye patch, which makes things easier. I have lost a confidence I did not know I had,an ease of bodily presence. I was no catlike graceful strutter before, but this is almost intolerable. trying to raft this big ape body around the bends and rapids of day-to-day.

I'm not getting used to this shit either. And I have at least a ear and a half ahead of me, which BTW is also the rest of my life with impaired vision.

Cancer-wise, if things spread or go south in the next year and a half? I'll miss out on the apocalypse won't I?

Posted by John Kurman at 6:36 PM No comments:

Both north and south poles are melting as I type this. The Eastern Antarctic is experiencing a 2021 Pacific Northwest heatwave, relatively. It's late summer and the sun is still up, the temperature is 10F, when it should be -60F. Eastern Antarctica getting a heatwave is bad.

Though still late winter, the Arctic is already melting.

Some would chalk it up to freakish weather but I am, yes, alarmed. And yes, I am going to be an alarmist. We've put too much heat in the ocean and air. Expect big storms, weird storms. Global weirding we should have called it all along.

Seasons have shifted or collapsed, gone to Drought and Deluge. We must shape the landscape accordingly or disappear. Or hole up in cities, in fear of the skies.

At this point, I am almost George Carlin in black sympathy of homo sapiens sapien. Yes I would like everything to be nice, but that's not the plan. The plan is to be mice, or roaches, or ants, and eat everything down to stone. And if that is what we are to do, c'est la vie.

The Fermi Paradox isn't really questioning the existence of extraterrestrial life so much as questioning interstellar travel. Maybe it's just too hard to do it. Maybe you don't need to because you have the vast riches of an entire solar system to breed in.
(For all their smarts, humans behave like every other animal or microbe: exhausting food supply at an exponential rate like a person with no impulse control. Maybe that dooms us)
Maybe FTL attempts opens portals to Hells or some other popular fiction: multiverses, dream roads, supernovae? And STL just takes too damn long or, if you can live in multigenerational ships, you no longer need worlds to colonize.
Although my favored solution? Intelligence is self-destructive. Earth has had at least five great extinction events. There's no evidence of intelligent life, or at least artifactual life, of being a cause. But there's no reason not. I guess I have to find evidence, don't I?
Let's pretend I'm right. Assume each extinction was caused by a self-doomed technological civilization.
The Ordovician/Silurian Event, from which the popular Silurian Hypothesis theorizing past intelligent creatures on Earth before humans, was caused by the sqwuids cuttlefish and octopus and such, who built a number of bases on the inner planets and asteroids before they left Sol. Yes, they trashed Earth, just as we are doing. TV Show?  My Favorite Mollusca about a Silurian octopus monster that sounds like Jackie Mason.
The Devonian Event, war of the fish peoples. Sponge Bob. Still some Squidwards hanging around.
The Permian Event, war of the lizard peoples. Although honestly, no. The Earth is a dangerous planet, as the dyings of Permian/Triassic/Jurassic show in stone. Can't really make a justification for lizard people.
The K-T Event, war of the bird people. Fed up, one side let loose a fist of god and clobbered our future Yucatan. Bird people might still be around. Bird people discovered the silurian squid bases on the Moon &c and modified them enough that even astronauts could open them. That's what happened.
Ok, here's another movie idea, John Carpenter's sequel to The Thing. Global warming has thawed out both the Thing at the South Pole and the Blob at the North Pole. Now you might ask, wasn't Santa supposed to be looking out after the Blob? Is that asking too much from that jolly old elf? Well, we are going to find out in The Blob vs The Thing.
The Blob is a slime-mold metaphor of us, you and me, yes, we are the Blob. When it comes to consciousness, the connectionists appear to win. The Blob will take over the Northern hemisphere rapidly. Meanwhile, in Antarctica the Thing has thawed out. My pitch to John Carpenter is Kurt Russell is a Thing, but knows he is a Thing and is pissed off he's a Thing and wants to fight the Thing. This conflict is interrupted when the government types show up (ala Escape from New York) to tell Thing Kurt Russell about the Blob. Thng Kurt Russell and the Thing agree to exterminate the Blob but it means most people will have to become Things.
Damn I wish Donald Pleasance were still alive, but with these cheap reverse engineered mini brains called AI, we have deep fakes for all that.
How do we get Kurt Russell to win against The Blob and The Thing? By sacrificing himself duh! No sequel. Only prequels. Which, since people understand What If is now, is: plenty o stories.
Posted by John Kurman at 8:16 PM No comments: 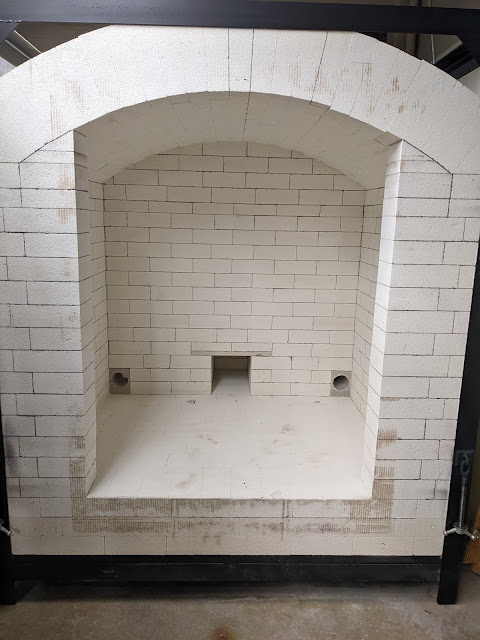 Ice apes, baby. Hothouse Earth bad. So we are told. And yet paleontologists call these past warm climes paradise. The polar regions heat up and tropics stay relatively the same. Going by natural cycles, the Earth should be going back to ice age just as scientists in the 1970s predicted. Humans pumped CO2 into the air and postponed that. 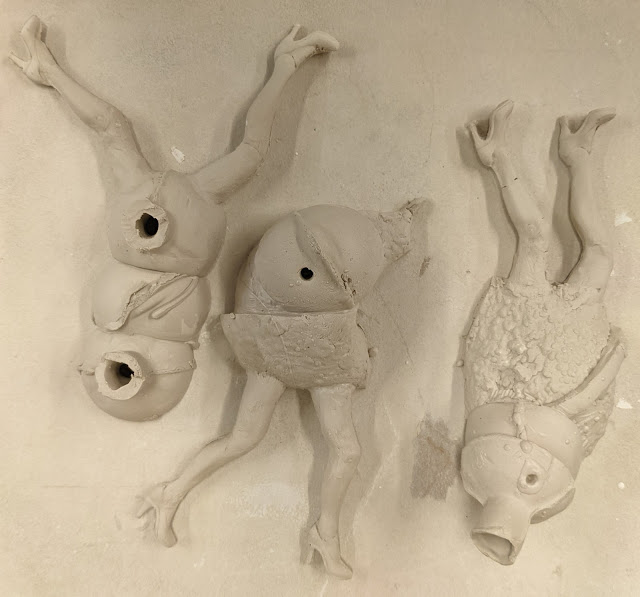 Granted, we are a force of nature that has changed the planet in mere centuries and has to be beyond a shock to the system. But it could be, if we stop killing things, might be very pleasant in the latter half of the 21st century and beyond. Not the dystopian realm so many assume. But only if we stop killing things.
Tumor Talk. I am losing the battle for sight in my eye. The doctor injected a steroid to the detached part of the retina, but my eyesight is 20/100 maybe worse. It wasn't just the tumor messing with me. I am now resigned to impaired vision. 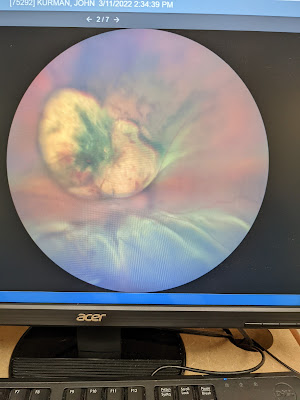 I'm getting used to needles getting stuck in my eye. I could probably handle a needle every every other day.
Posted by John Kurman at 7:49 PM No comments:

The World of Sears 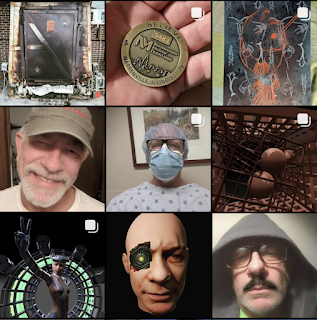 In the early 90s, one out of seven jobs was with Sears, and good paying jobs with benefits I might add. They (had they known) could have owned the entire internet. They had everything: customer data, credit agency, communications, you name it. All they needed was to have someone from the future clue them in, I guess.
Now Marvel has us all familiar with the multiverse, now let's talk about counterfactuals. Counterfactuals are time travel, but there is a spectrum of least likelihood the further back you go. Nonlinear dynamics compound, therfore there is no return to mean except from left field.
Actually, a world of SEARS might not be bad right now. Given everyone shitting their pants. Alright, Johnny lets split us in half for a Q&A.
Q: What do you think about Ukraine?
A: As opposed to Yemen, Syria, Ethiopia, for starters? Oh, WHITE refugees, why didn't you say so?
Q: That's cynical. No, what's going to happen?
A: Russia is going to win. Putin is not going to accept anything else. Hopefully, former President Zelenskyy is hosting the Oscars next year.
Q: The Russkie look like they are getting their asses whupped. Ironically by drones from Turkey. But where TF is Russian air power?
A: Prisoners and cannon fodder first to judge defenses, hard elements for counter strike. Classic KGB battalion. And don't kid yourself, Putin will use nukes if he has to.
Q: You don't think that a bluff.
A: Nope. He will use them and is counting on you to not believe him
Q: Who are you the Putin whisperer?
A: Think of this long term. Russia is now on its own which it has always figured on. It has nothing to lose. But, Russia has got a buddy in China. That's not going to change. Russia got the future cultivating acres, China already up in Siberia, still plenty of Arctic gas and oil to tap into. Long term wise, China and Russia got a good 40 year surplus over the old USA. Besides the real WWIII is China taking over Taiwan.
A: They are thinking World Island. Our (USA) only option is Your World Island in My Solar System, bitch.
Q: Thank you for your time.
A: Bye!
Posted by John Kurman at 7:28 PM No comments: