Johnny got kicked off Twitter. Just as well I was losing my writing skills. 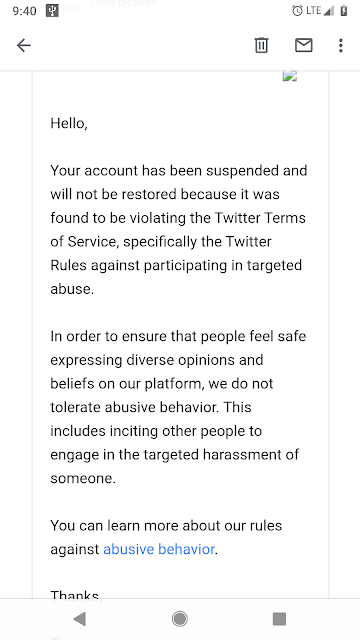 Was it targeted abuse? What insult isn't? Lets ignore the fact that I was responding to a vile filth of a tweet from a right wing troll.

I notice some things..I have been in Twitter jail before. Lately, I've been behaving myself and as a result the abuse reports have been from deeper and deeper in the past since I first posted in 2013.

This means that either an algorithm is scraping, or a troll army is scraping my tweet history.

And it started when I started interacting with #QAnon. I was politely dismissive. Heres something I notice. A lot of #QAnon I intereacted with were clearly sitting in a grey cubicle in Leningrad Im sorry Saint Petersburg.

Honestly it's for the best I'm off that website. I was spending way too much time there.  Plus my Trump exposure is down 99.9% and how is that bad?

@johnkurman kicked off Twitter. The Hitchhiker's Guide To The Galaxy sucks saggy walrus balls. Dont @ me.
Posted by John Kurman at 8:09 PM 5 comments: