What would happen if the South Won The Civil War?

Well, look around you. They did.

Oh, true, not a geopolitical victory, but a victory nonetheless. Read our history. Read recent news. The Confederacy won. The Union capitulated. The elimination of castes was simply too high a price for our nation to pay. We wanted to succeed in the world. You have to be nasty and smart and organized to do that. Perpetual war extinguishes democracies.

Premise: The South succeeds in Secession, by whatever means, and we call it The Victorious Southern Revolution. Southrons Of Secessia Succeed. Results?

Kurman’s Ironclad Rule of Time Travel  #4*:  If the South Wins the Civil War, the Soviet Union becomes the No.1 global superpower.

(I’ll explain that in a minute, but part of the reason is, well, those Confederate and Nazi flags waved at Charlottesville? Don’t happen. Nazi flags don’t exist, because Nazi Germany never exists).

A lot of masturbatory energy has gone into this South Wins divergence, by a lot of people.

Harry Turtledove (Guns of the South, Southern Victory series) seems to have claimed a lot of this real estate. He in turn was influenced by MacKinlay Kantor, who wrote a Look magazine article in 1961 titled “If the South Had Won The Civil War”. There is Ward Moore’s “Bring The Jubilee”, of a enervated North and an expansive, vibrant South.. Why, even Sir Winston Churchill had a go at it in a 1931 essay. Churchill’s is a naively infantile fable. Lee, after  victory at Gettysburg and conquest of Washington DC, in a “master stroke” frees the slaves, thus gaining Great Britain as an ally.

These authors, and many others, posit some type of military victory that allows the South to secede.
They further posit that not only does the South abolish slavery, but there is an eventual reunification with the US of A.

The standard Pareto wank is a victory at Gettysburg. Or Vicksburg. But by then, in 1863, the Union was an enormous military beast that gave even Great Britain and France pause. Further, Great Britain, having outlawed slavery and curtailed the Atlantic trade, had zero confidence that portions of the South would not renew the Middle Passage slave trade.

That victorious South?  I see it as post-colonial Mexico at the Mason-Dixon Line. Revolutions, bandits, slave rebellions, low caste white rebellions, dictatorships… Heck the US of A might have to build a Wall!

Perhaps at the end of the fat tail, a King and aristocracy of a Southern Empire, lots of counties and counts in conquested Carribea. But maybe not speaking English? Maybe an aggressive Mexico takes shit back?

Regardless, not a prosperous Confederacy, and one that has flown apart. Texas for sure secedes.
This military victory divergence I see as almost always a USA and CSA that is weaker than E pluribus unum.

Fast forward a mere 50 years to WWI. Posit no USA or CSA troops in WWI because of Isolationism & Continental Antagonism.  Armistice a year earlier, Europe having punched itself into a stupor of clarity. I have faith that they all look at each other and say we really don’t need to do that shit again, ever.  Maybe not, but probably no post-war humiliation of Germany.

Kaiser still there?  Maybe. But Lenin still injected into Russia (great man fallacy? no, nasty man surety) Point is, the Soviet Union is gonna happen. What happens to the USSR with WWI ending with a weak Europe and a distant America?...

Anyway, the best way for the South to Win the Civil War? Don’t fight the war.

These war avoidance divergences almost invariably jonbar hinge upon the Constitutional Convention in 1789. (And maybe even that is too late to fix). But the fallacy is the Great Man theory. Lincoln is killed in a carriage accident in 1859 type of stuff. Problem is the passions are already riled. If you can’t fat-tail your way to an amicable secession in 1789, you are gonna have some kind of war.

Is that actually true? I’m making this shit up. It sounds right to me.

So, the Constitution loses the signatories of Virginia on down. The US of A starts with 8 colonies. (I’m figuring Maryland goes with the Southern Colonies).

Certainties? Yankee ingenuity. The lowly mechanicks make cotton gins, standardized parts, firearms... Southern planters, averse to paying for anything, develop one of the finest industrial espionage networks ever. White people, immigrant and established, reproducing at biological maximum. Genocide. Maybe not as bad as our USA, or perhaps worse.  A continental expansion is inevitable, and maybe a race through the Southwest.

Also, with slavery, immense Southern wealth: a system of global credit through capitalized chattel ownership, a collateralized debt system with human commodities. People are money. (Kind of like what we have now, but more depraved).

Speaking of depravity, I think for an honest and comprehensive counterfactual, we need to plumb the depths of depravity, especially when it comes to corporate culture, and the lack of morals therefrom.
We can discuss the horror of slavery, but slaves are born of woman. The weaponized womb . Well no wrong, womb was weaponized from the get-go. The capitalized womb? The collatoralized and commodified womb? That’s  an ancient and still modern horror.

Consider, old Tom Jefferson. Smart fucker. Took advantage of that constitutionally stipulated deadline of January 1, 1808, when the “importation of persons” is prohibited. Article 1, Section 9. The slave trade officially goes domestic. Meaning southern slave breeders, I mean the genteel southern planter caste, gets to make a shit ton of money, especially ol’ TJ. (Too bad he blows  it all on Monticello).

Jefferson kept and bred slaves as he would horse or hound. But what about his wife? He loved her deeply and dearly, and he bred her to death. He fucked her to death. That’s a fucking horror show.

Which gets us to the real meat of a good Southern gothic alternate history horror story, which is what you want.

Once you posit a less chastened South, free to experiment in the breeding of human livestock, backed by modern scientific methods and corporate deep pockets, we move beyond a caste system into meat logistics.

I present to you the blaxploitation movie Mandingo, which, it wasn’t a good movie, but the original book - of a fictional breeding farm in the South called, of all things, Falconhurst - created a genre I’m calling the cuck and bull genre.  Fifteen sequels from different authors.  A Broadway play and two movies.

I think that is the most realistic version of a 21st century Confederate slave industry.

Were there breeding farms in the South? Yes and no. Not like corporate shit. Not like multinational conglomerate level shit. But if slavery continues in the South, and slavery meets the modern corporate structure, and modern science, you got depraved sex farms. You got rape factories too, but you call them something else, something more polite, courteous and genteel.

And then there’s the meat industry. There is really no low bar for how degraded one can make human flesh. If you can breed them into a recognized subhumanity? Bred like roaster chickens for maximum yield?

And of course, once human chattel is no longer considered human, but livestock, new dietary horizons open up. Good old industrial cannibalism.  I wonder, since depravity seems to degrade everyone, would this grisly practice be restricted to the South? You don’t suppose the Chicago meatpackers would want to get in on the money? Would negroes be processed in an even more horrific version of Upton Sinclair’s The Jungle?

Oh, geez, I got sidetracked on the Soviet Union thing didn't I? Here: 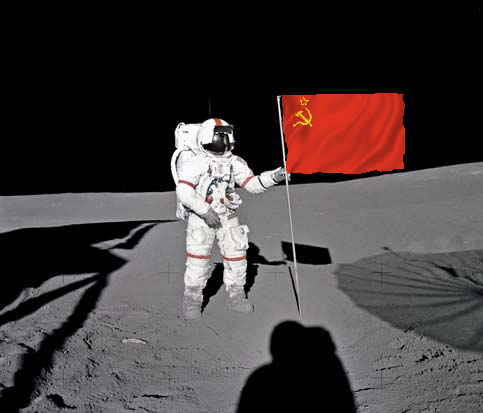