"How was your bronze pour Saturday?" I was asked this morning.

"I had so much fun!" I replied, "It was just one problem after another!" That was not sarcasm. I really did have a lot of fun solving problems.

The reason, of course, that it was so much fun was because I adapted, improvised, overcame.  Not to brag, but I was the horse that knew the way to carry the sleigh. Actually, you know what? I'm gonna brag.

I was a fucking stud Saturday. I was big swinging-dick stallion Saturday. Was? Am!

First off, we had that big snowstorm, which got us off to a late start. We were forecast to get eight to twelve inches of heart attack snow Friday night and Saturday. I lost maybe ten minutes of sleep worrying about that. Got up to pee at 3am, looked out the window, saw that the snow was not sticking to the roads and said, "Okay no problems".

We were scheduled to start at 9am, and some people didn't make until 11am, but I got us going around 10. I had people calling all morning asking if the bronze pour was still on, and I said yeah get your ass in here!

A video crew hired by marketing arm of Continuing Education came in to film us and do interviews. I had them interview my students and me while the first heat was getting up to temperature. I was fed questions, but still was very conscious of trying not to be a dork.

I know some people are very suave and polished in front of a camera, and I do well in public speaking situations, but there is something about cameras and tape recorders that gets me tangled up in my thoughts and all stumbly in presentation. Hopefully, that comes across as charming as opposed to dorky, and I'll find out in a month when they post the video on the Harper website.

So, and then our lance pyrometer (the digital device you stick in the molten metal to gauge the temperature) decided to crap out. I announced to the class that we were going Old Skool and I would pour based upon the color of the metal. (You really can't tell what temperature it is with any degree of accuracy what the metal temperature is, but you want to see yellow-white hot color). What that meant is if I had to squint to look at the metal, it was probably ready. What that meant in actuality was we were going to pour the molds way too hot, and there was a good chance of a lot of gas porosity defects in the pieces.

Lastly, there were a few spills taking crucibles out of one furnace, and the spilled metal caused the base block to float. And thus the crucible kept leaning over and resting on the side of the furnace. The first time I saw it I said what the fuck some dumbass student didn't put the crucible back correctly, and I repositioned it. The next time, and it is leaning over again, I look down at the bottom of the furnace and notice a beautiful sea of quicksilver down there, with the base block and crucible kind of swimming around in it.

Well, this will not do, so when they go to pour that heat, I grab a scoop, go in and scoop out the bottom, slap it up against a wall, go in for another four or five times to get the level of the spilled metal down. My leather welding glove caught fire, and people are jostling me to notice that my hand is on fire, and I'm getting with them saying "I know! I know! Get the fuck away from me!". Finally get that done and heave the flaming glove off my hand before I'm burned.

So, that's taken care of. And then the rest of the day was just the normal broken molds or spilled metal through cracks in molds. We got a 100% survival rate.

In retrospect, I'm kind of amazed at my own somatic behavior when it comes to all this. If a mold cracked, people would freak and stop pouring and I would yell at them to continue, and just jam a scoop of sand up against the leak, and do it without even thinking about it. It's all a reflex action now.

And, as stumbly and dorky as I usually am (despite being pretty athletic all told), and as skittish a group of colts I had working the pour, I was beautiful and flaming dance we did. Seriously, I was fucking graceful. It's just all muscle memory now. It really, thinking about it, is amazing how no thought, zero thought, was involved in my movements and decision making. It just happened, and it was a beautiful thing.

We've a terrorist drill at the college today. I had to take a DHS class in preparation for this, which, as you might expect, was a circle jerk. I got a certificate of completion for that.

I have a little card in my wallet now, that says "Run Hide Fight". It explains what to do in an active shooter situation.

The drill isn't really real because everyone knows it is going to happen. I have thought about what to do, since it is all situational, I'm going to do things which I would not have done prior to taking the class, so I suppose it wasn't a complete waste of time.

For example, I've designated our kiln room as sanctuary because it is spacious, there are two exits, and both doors lock automatically when closed. I'm also going to close and lock the tool cage in the woodshop because that has things that can jimmy doors open. Before I lock the tool cage, I grab a nice big crowbar and direct the students to grab all the hammers and heavy throwables.

As you can guess, I find the Run and Hide part distasteful, and contrary to my barbarian nature. I suppose, in some type of horseshit macho fantasy scenario that so many psychotic Americans run through, I will be fierce and victorious. And armed. But that's all horseshit, and anyone with a frontal lobe can see that.

Self-sacrifice? Fuck that. I can't protect you if I'm out of the picture. Like swimmers that abandon drowners that try to drown them, a certain amount of selfishness is involved in this. Not surprising. It's never cut and dried.

Anyway, the drill is about to start, and I've got people to protect, even if it is just practice.
Posted by John Kurman at 8:17 AM 2 comments:

"Runt of The Litter" 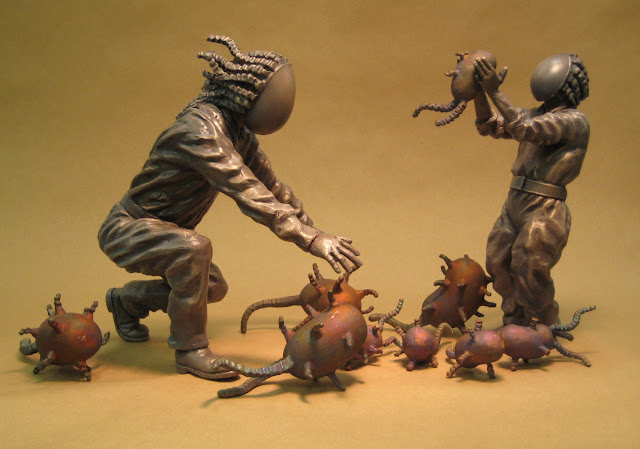 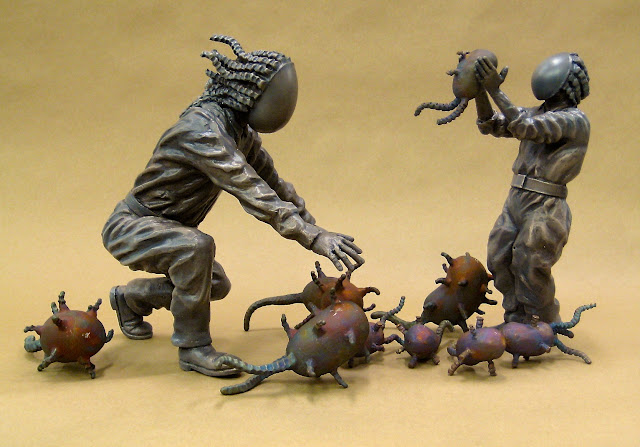 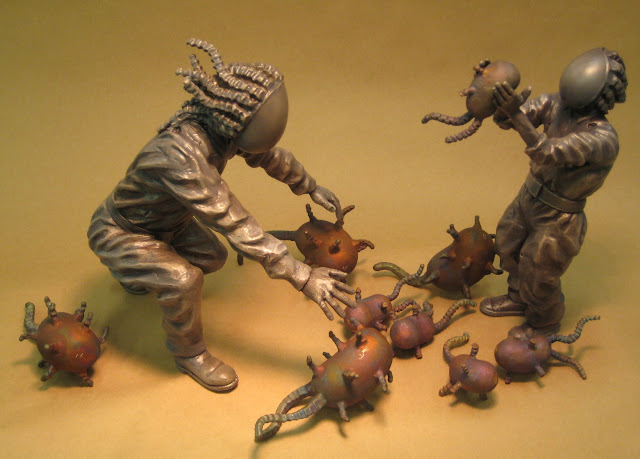 Sculptural Objects and Functional Art. Many said this was a good years. I saw a lot of red dots (indicating sold). People I know there were happy because they were selling.

The unconscious theme this year was creepy baby dolls and baby doll heads, which is to say, Death. For the longest time in the western word, at least prior to the now 100-year-old anomaly, the thing that babies did most of all was to die. You had to make a lot of babies to get just a few to breeding age. Not surprising, then, that, like clowns, babies are associated with Death. I took very few pictures of the baby doll sculptures. Didn't see a need to. And, of course, no pictures of glass, which is the usual same ol' same ol' with SOFA. Not enough wood, ceramics, metal, textiles. Way too much fucking glass.

Thomas R Riley galleries had some nice stuff, including several pieces by my friend Philip Soosloff. 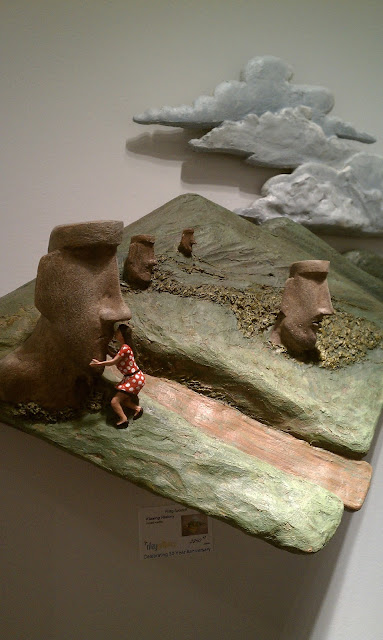 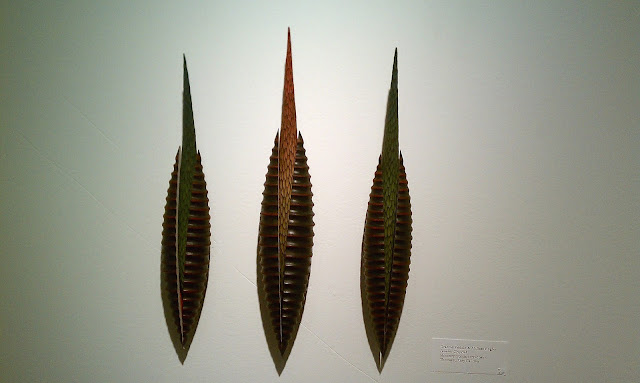 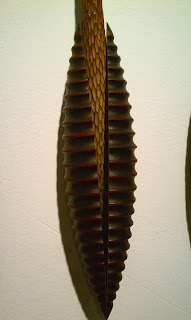 I forget the gallery, but I liked this piece by Andrew Hayes of book paper folded around and encased by steel. 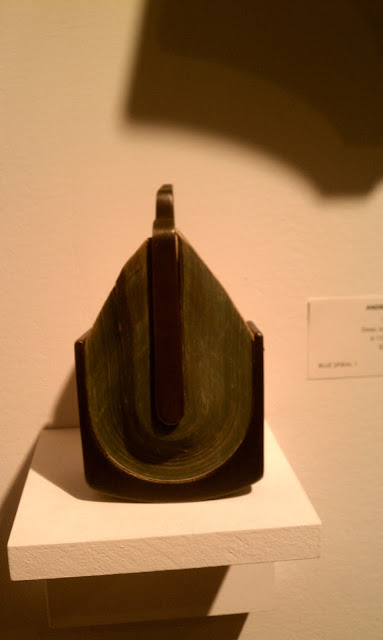 This wood piece, titled "Rural Route 1" was by Randy Reid. 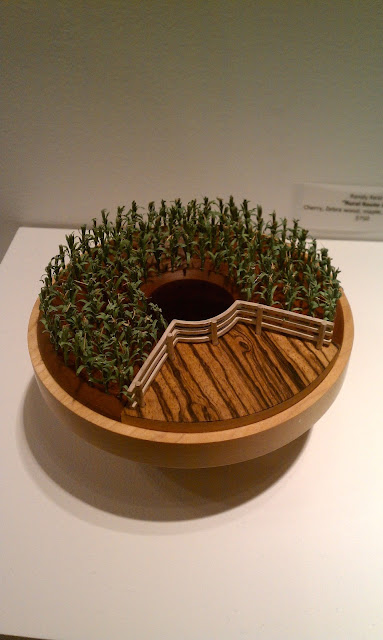 At first I like this cast glass and found steel piece by Paul J. Nelson, but now I'm not so crazy about it. 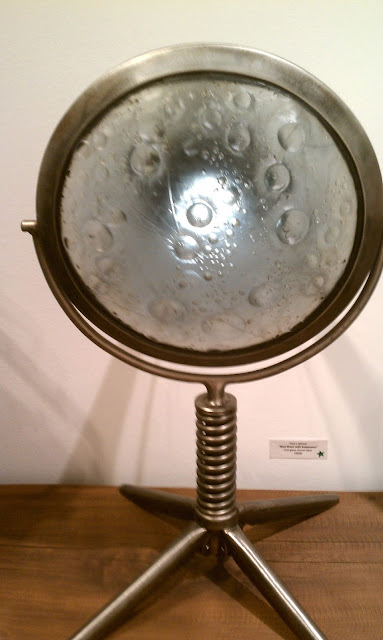 Svenja John of Germany made these fun little objects out of polycarbonate foil. 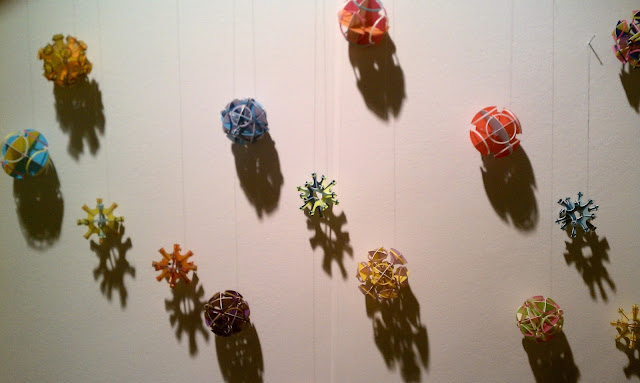 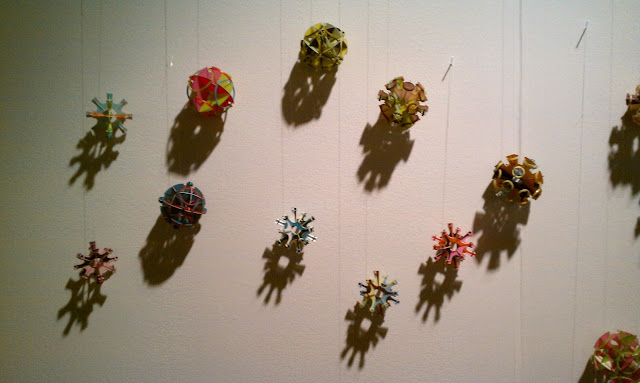 I've always like mosaics. Jun Kaneko had two big heads with mosaics. These heads were about three tall. 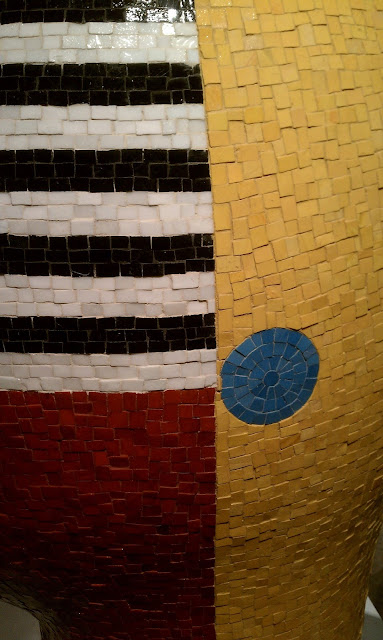 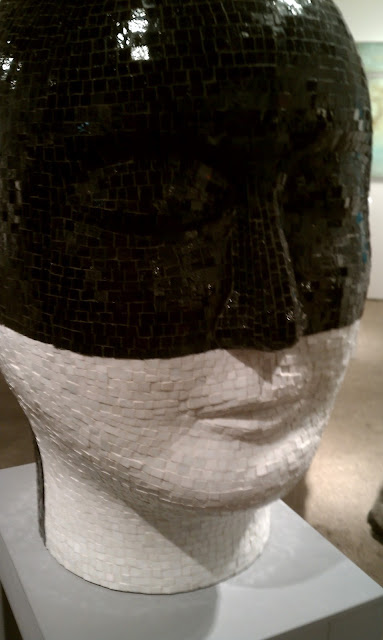 They had a lot of flat work this time out. Maybe there wasn't enough sculpture to fill the hall. I liked these two paintings by Bill Sala, entitled "Bindlestiff", and "A Fool And His Money". 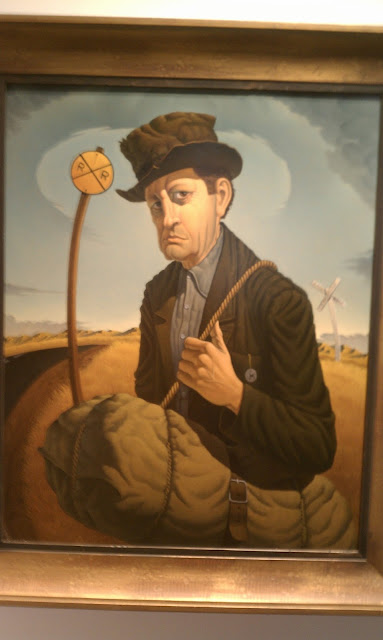 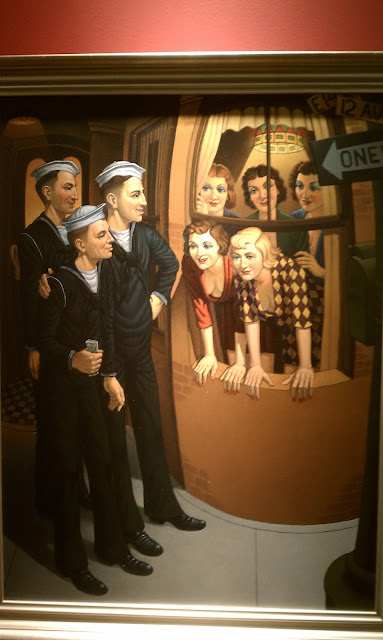 Susan Saladino did some fun clay pieces that looked like paper mache. 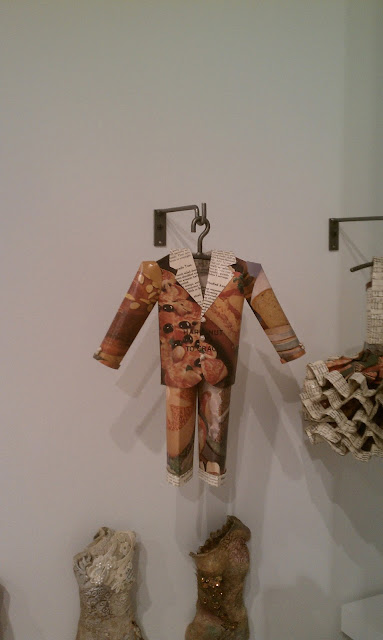 This is the only glass I took a picture of. Blown glass Spray paint cans. 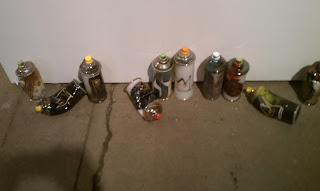 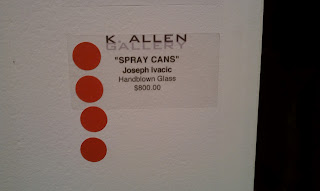 I took this picture, which did not turn out so well, as one of the clay students is interested in crystalline glazes. This glaze is called Sea Foam Green. The piece is entitled "Bottle" by Hideaki Miyamura. 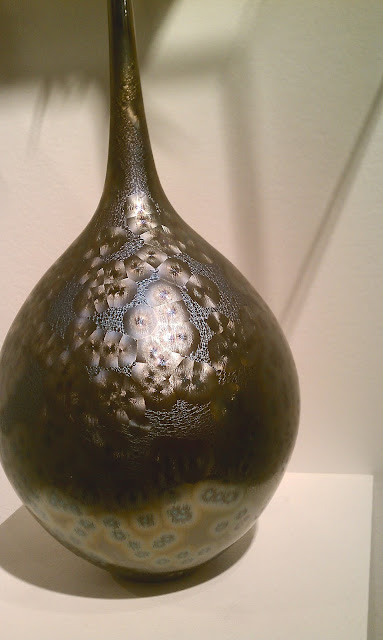 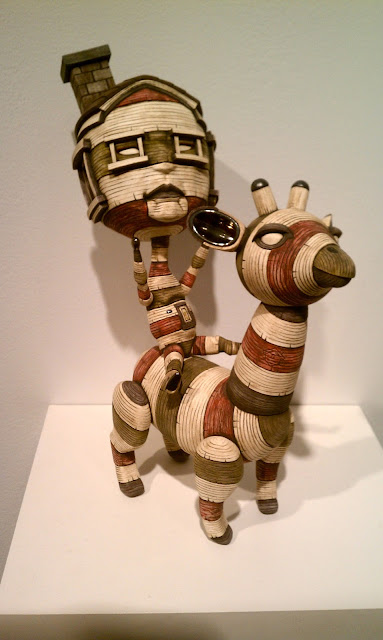 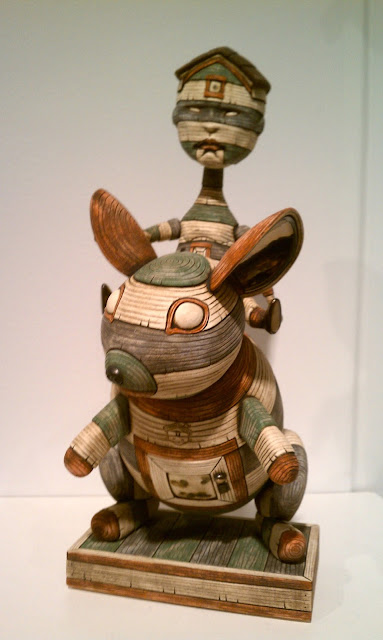 Patti Warashina is an established ceramics artist. This one, titled "Tied Up in Red Tape", was stashed in the back. 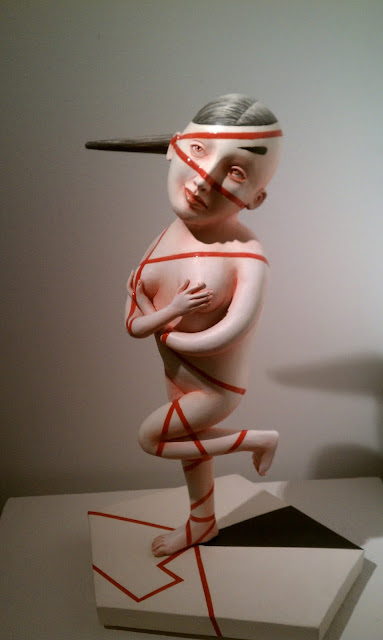 Christopher David White made this ceramic piece, entitled "All Mine". It's hard to see, but the arm ends in a mine shaft entrance. 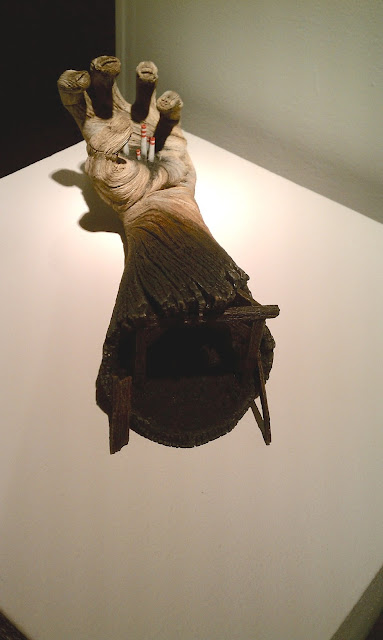 Can't remember which gallery, but they had a lot of nice delicate wood bowl form pieces. 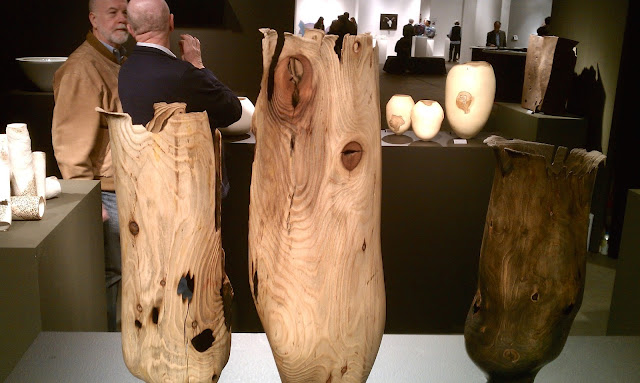 The first link was to Philip K Dick's novel The Zap Gun. The book is a mess, probably because Phil wrote in 1967, when there was some really good illicit street drugs out there. The salient point to be taken was that weapons had become fashion items to be plowshared into civilian consumer products. The weapons themselves were basically useless, but looked really cool.

The second link was to a promotional video of Boeing's "new" F-15SE Silent Eagle. Please note the Project Runway music begins at about 57 seconds in. It's all twirking teenage cornhole stuff after that. Lots of nice little Barbie accessory items that you simply must have from then on.

This is not the ornamentation of weaponry, which has gone on for at least 200,000 years. This is not the "making special of" crafting that you can see on everything from hand axes through to jeweled swords and pear-handled guns. Nor is this an offshoot of the toy industry. Toys, of course, actually are useful, in that they used for play, which is a worthwhile learning activity.

No, this is the fetishization of weapons into a utterly useless seasonal statement. This is, if you will, the equivalent of fiat currency in a weapon form of approved personal adornment. This is making a useful item useless, rolling into the mass production and consumption treadmill that capitalism's very existence depends upon.

Other clues: Hummers. As a military vehicle, hummers basically suck. Trucks, on the other hand, are very useful military vehicles. I see hummers all over the road with tiny little people inside. I really want to give civilian hummer drivers the full Hummer experience with a well-place improvised explosive device.

Mp5 lookalike. Hey, a lot of weapons are not so good. Not so well designed. Others, like the AK-47, or the AR-15, are pretty nice.

But the GSG-5 22 LR Tactical MP5 Lookalike? Looks cool, and if the only thing you want to do is shoot squirrels, why this is gun for you. But something more useful? How about the new AK-12?


Body armor. First of all, body armor is great for protecting the trunk, but do you really want to go through life brain-damaged and missing your genitals? And how many civilians (or Ferguson police) really needs this fucking shit? I mean, outside people that are going to go on shooting sprees?

Drones. How about this fun little item? Priora Robotics sold the Army a drone that is outperformed by civilian hobby drones.

Get used to this, folks.