My current psychosis is that we all died on March 23 1978. Or maybe it was April. All I know is we got one last February in before something went wrong. Now maybe we stuck in the Bardo.

American Book of the Dead.

I started this blog aka blog in February 2010. I love winter. February is the best. I am a Northern Barbarian, a glacier chaser, seriously inbred. Of course I enjoy winter. 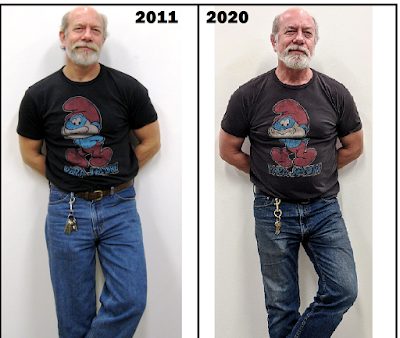 Posted by John Kurman at 7:49 PM No comments:

By the mummified foreskin of the sweet baby Jesus, it is getting to be way too easy to poke fun at this motherfucker. I'm starting to think that this is The Simpson's Matt Groening's universe and we just live in it.

So, is Trump the Anti-Joker? Was he born with clown makeup and needs a bilirubin base to hide it? Was he born into a luxurious soft easy life and become a psychopath as a result? Is he actually, like Roy Cohn, secretly desirous of being a woman and now doesn't care who knows it? Have we ever seen him and his sister together?

Is Trump of the Mole People?
Was Eric Trump born without eyes? Do they have to paint eyes on him each morning to face the day?

John Quincy Adams believed there were Mole People. He wanted to send a military expedition into the bowels of the Earth to find their subterranean realm.

You would think the Melanoids would win, seeing as we now know that melanin is an energy absorbing molecule like chlorophyll and albino mutants are weak.

"Now Go Home and Get Your F*ckin' Shine Box"!

Remember Planet of the Apes? The scene where Charlton Heston confronts the remains of the Statue of Liberty sticking out of the sand?

Xenophon of Athens had a Planet of the Apes moment some 2,500 years ago without quite realizing it. He and ten thousand Greek mercenaries, having fought on the wrong side of a Persian civil war, were fighting a running rearguard action trying to get the hell back to Greece in one piece. One night they camped close to the river Tigris, near the modern city of Mosul.

They found enormous fortifications abandoned in wrack and ruin.  The ruins were gargantuan by Greek standards of the day.

Xenophon asked the locals who had built them. They shrugged and said probably the Medes (the prior regime of the Persian superpower). The irony was the locals were probably Assyrian, and the ruins were no doubt the remains of Ninevah, the capital city of the Assyrian empire. Ninevah had been laid waste a mere two hundred years before Xenophon’s arrival and was already forgotten.

Hey, those massive walls worked great didn’t they? This is the lesson of what I call Land Power culture. Static solutions to static problems get you 2,500 years of dirt piled on top of you.

The Danes are said to be an island people who happen to own a peninsula. They have retained a maritime culture. They are a Sea Power culture.

The United States can be viewed as a Navy that happens to own a continent.

Sadly, there are shitheads trying to eradicate this worldview. Much has been written about the advantages of Sea Power culture, the most obvious being Alfred T Mahan’s The Influence of Sea Power Upon History. Mahan convinced Teddy Roosevelt to build up the US Navy.

I would argue that a culture need not be near the sea to be a Sea Power culture, any more than Viking is an ethnicity (it’s not, it’s a profession). The usual suspects are Athens, Carthage, Venice, the Dutch Republic, the Scandinavian countries, Great Britain, the US of A.

I would argue that the Mongol Empire, prior to stagnation, was a Sea Power culture, as was Prussia, the Huns,  Islam in the 8th century, etc. The commonality being vast tracts of land with no physical barriers, thus forcing the inhabitants to face and adapt to powerful enemies via fluid responses (e.g. horses rather than ships).

And so you have dumb static solutions from stumbling slow-witted jumbos that are expected to work forever, as if circumstances never ever change.

Build a Wall. Wall built and the clapping of imaginary dust off tiny manicured hands. “Done and done!”

Travel bans and immigration restrictions based upon prejudiced views of shithole countries and the illusion of safety. (As if merit based fails to recognize the inherent arrogance of an inherent superiority that does not exist in changing environments. And of course we need more soft fat white people to make us look good).

I am astounded at the reactionary vision that engages in magical New Age thinking, wishing the world back to some fantasy paradise through positive thinking.

Take Steve Bannon back in 2016. Seriously, WTF Steve, a Navy guy supposedly well read in history, espousing a trillion dollar infrastructure plan to rebuild “ship yards, iron works, get them all jacked up. It will be as exciting as the 1930s, greater than the Reagan revolution – conservatives, plus populists, in an economic nationalist movement”. Might as well build steam locomotives while we are at it.

It’s just as well they didn’t get to light that trillion dollar bonfire to dance around like some prancing fag at a Superbowl party. This is some seriously fucked up land power retardation.

Aerospace is the new maritime (except, with robots… and robot farms, unless you can perfect the centrifugal toilet, the next step beyond 2001: A Space Odyssey, and radiation, and the debilitating health effects of low G).

China gets it. That’s why they are building stuff on the side of the Moon we cannot see. (Although my brother argues, how do you know we don’t have that stuff already? Fair point, but we have no long term vision based on lurching from one administration to the next).

Drifted off topic there.

The only way the USA doesn’t end up all Planet of the Apes is to return to open, inclusive dynamism and take whatever the world will give us. If we continue to act like a land power, we will end up like the Soviet Union: birth rates and life expectancy down, alcoholism, drug use and suicides up, infrastructure and military in decay, a political system  unsteady, corrupt and in chaos, resources, opportunities, and education available to the highest (and/or most dishonest) bidder.

Because right now, the rest of the world really doesn’t want to come to a place that has no balls, so long as we keep on acting like pussy ass bitches that hide behind walls.
Posted by John Kurman at 8:51 AM No comments:

I am convinced we exist in the most retarded of simulations.

Today's news reads like Onion articles from 5 years ago. You got the Kansas City Chiefs somehow based in Kansas, since our stable genius with his black hurricane marker can't find them on a map.

You got a fat fuck of a blue-ribbon-from-West-Point Secretary of State who can't find the Ukraine on a blank map.

You got opera singers crashing Mar-a-lago, fired upon by useless security with useless guns, her bullet riddled car ignored at the airport as she picks up her mom. You got slack vagina Trumpettes putting up bad caricatures of some fat waxy face planted on a narrow-shouldered football cartoon, while the President's wife and son's mistress compare their much larger hyena pseudopenises to father's and son's little peens.

You got a circus bear for President, who, during Executive Time, squeezes out two sausage-link turds into a toilet that takes ten flushes to whisk them away, by which time he has mistaken them for real sausage links and gobbled them up. A circus bear that can't stay upright on a scooter, molests the trick poodles, can't operate a clown umbrella, and gets out of his cage through rudimentary animal cleverness.

You got a #PABGOP Senate convinced of the circus bear's guilt but too scared to convict.

Well, I have the solution. Reduce the felony charge to misdemeanor. Dart, tag, and equip Trump with a radio collar and release him in the wilds of Manhattan. If he wanders off the island, allow his large adult sons their fondest wish to hunt him down with high powered rifles.

Then, I say we take off and nuke the whole fucking thing from orbit.