As you are reading this, do you hear your own voice in your head reading the words out loud? I do.
I was astounded to find out that only 30-50% experience this kind of internal monologue. I thought everyone did. I asked my niece and she said no. She experiences no intrapersonal communication, thought without symbol. "Do you?" she asked me. "Of course" "That must be annoying".
It would explain why I can't meditate. My inner voice won't shut up. My mediation sessions always end before they begin, with me yerlling at myself SHUT UP.
But it is not annoying. I entertain myself for hours chattering away. I will crack myself up. And gross myself out. Who is cracking me up and who is cracking the wise cracks? I don't know. For sure this is part of why I have such a rich internal life.
What about other voices? Nope. I don't have alien voices telling me weird things or demanding I self-harm. What about ear worms? Music in your head that just goes on and on and on and on.
Do people without inner monologues experience ear worms? What about mental imagery? I can produce hyper realistic visions in mny head. Is that seperate from inner monolgoue? I don't know.
Posted by John Kurman at 6:07 PM No comments:

Welp, I had the last of the eye operations for this year. They lasered the tumor one more time, as it is not shrinking fast enough and is tugging on the retina and threatening to pull the macula lose again, as happened earlier this summer.
For anaesthesia, I again received a needle in the eye. Eighth needle in the eye this year. I posted a pic after and a lovely admirer of mine posted "Brave you are". I don't think so. It had to happen. I had no choice. Stoic, yes, but brave? I don't think so.
Interesting though how the subject turned to courage and masculinity. Why? Plenty of courageous women out there and honestly I think a far greater proportion of women display courage versus men. But somehow talk turned to masculinity and the alpha male.
Alpha males versus beta males, and then gamma, delta...to omicron. But aren't omicron males in ancient greek cultures more powerrful than alphas? Who cares. It's all pseudoscience anyway, a category built to assuage men who think they deserve more than their lot, and who are probably tiny peened as well.
Somehow, a guy named Nick Adams pooped into my feed. On Twitter, he is Nick Adams (Alpha Male). He has a quote as to how alpha males eat wings at Hooter's while beta males eat soy or something like that. Here is a pic of him, 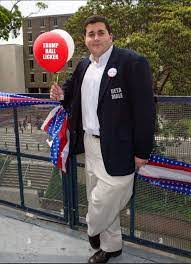 and as you can see, not only is he a disgusting soft body, but is originally a pudge from Australia. He can never be a red blooded fillled-to-the-brim-with-testosterone  American alpha male. I don't think he really understands the pseudoscience behind his declaration.
Most of the concept of manly man goes, via the Brits, to ancient Greece. Now, the British through some rather dubious logic, traced Western civilization back to the Greeks, via a radical theory that European superiority came not from Chistianity, but from the Greeks, who invented freedom and rationality. Rome then spread these virtues to the rest of Euope, culminating, obviously, with the British Empire.
Let's ignore the bullshit and run with it. By cultivating the ancient Greek version of masculinity, the manly alpha male is defined. But don't look too closely at the sexual practices of the ancients. More on that in a minute.
The Greeks themselves, through the writings still extant, were positively obsessed with the Persians. Given an obvious inferiority complex towards their powerful eastern neighbors, they often lampooned Persians in a negative light. Greek art endlessly portrayed the Persians as cowardly, scheming, effeminate barbarians. The Greeks defined the Persians as the ulitmate 'Other'.
For exmple, there is a wine jug, the Eurymedon vase, from about 460BCE, that celebrates a Greek victory over the Persians. On the vase a Greek hoplite (a GI Joe) humiliates a Persian soldier. 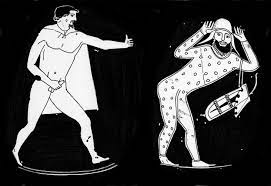 The Greek is bent at waist grasping his erect penis, rushing to pentrate the Persian's rear end.
"Look at me, buggering this bloody Persian!" says the commerative jug. This was then a common practice. Indeed, sexual mores and gender roles being what they were back then, pederasty was practiced frequently among the Greeks and the Romans.
A common definition back then was that a true alpha male is never anally penetrated. It's OK to fuck anythhing else, women, men, boys, aninals were all fair game. But you were taken down a peg if it was ever known that someone had slipped the pink one in your bum - knowingly or not. (There are Roman comedies with unfortunate characters ending up as bottoms either from inebriation or accident).
NIck Adams may, by this definition, be an alpha male in ancient times if he has not been buggered. But he must also bugger others to show his innate European superiority. That might happen at a Hooters. Or a locker room, or a slip on a piece of soap. But most Greek hoplites would just look at Nick and see, not a real man, but someone who can squeal real good.
Posted by John Kurman at 6:10 PM 1 comment:

I searched my memory hut for 10 years ago, and yes, found two entries on Sandy Hook and American Gun. 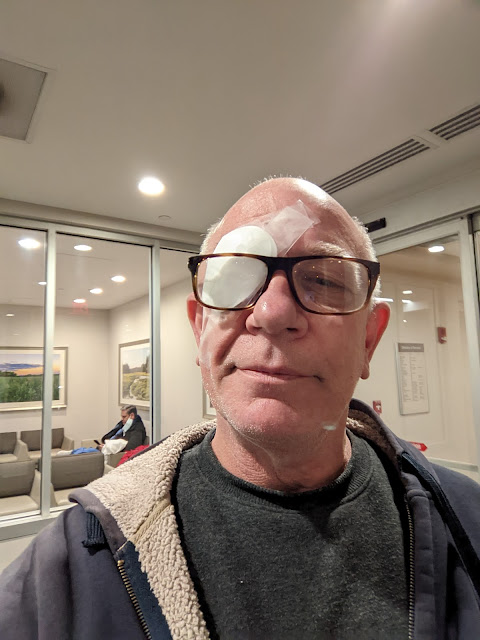 My first observation is I have become retarded compared to 55-year-old me. Sure, the sex, drugs rock and roll take a toll, but still a shocking observation of how much smarter I used to be.

Regardless, my thoughts are the same on guns and violence in America as in this essay. If we enforced our laws, there would be a lot less killing. Pussy ass bitch #2A crybabies whining about losing their guns, gungrabbers grabbing out of their scared little bunny paws, sounds like White Grievance.

So shut the fuck up. Guns are killing more kids than cars. Guns don't kill people. Americans do. I fi we have less Americans... I understand.  I am in favor of Replacement Theory. You soft white disgusting fat-bodies (like me) versus bold, risk-taking, life-risking stubborn migrants, I take the migrants. I choose brown fat cells over white fat cells. It;'s not like there isn't a need for white fat cells, just not so many.

Say what you will about abortion being the murder of children in relation to gunning them down, as an atheist I should agree. (Abortion cancels a once in a unverse being, assuming I am a aspiritus atheist, which I am. That's horrible, Gunning down a child is cancel fetus horrible? Are they equivalent? No).

Morals of  gun deaths > abortions is obvious to me, offensive to you? fuck off. Fuck your feelings or back them up with logic,

Sandy Hook told me a lot about the US of A. Everyone is expendable. Psychotic. We are in danger of fucking it all up, USA, Divine Rights or No? Pick. Choose.

Here is my book report on using DALLE-2. It's a promising tool, but I simply don't have time to learn it.

You must carefully construct your text prompt. When you consider that the critter was fed on 650 million pictures and caqptions, hooking up words in a prompt to images in the output is not so simple of a task. These are algorithms that are so complex and arcane that no one understands them, searching through a vast sample space of combinations. Magic, but not a genie who easily grant wishes.

Just to make sure, I asked GPT-3 to construct programming language for my own personal DALLE-2 using my images, styles, and writing. It pooped back three paragraphs explaining why it couldn't do that.

The thing of DALLE-2, the "prompt engineering", to make best use of the API, you must be an expert in five or six fields: art history, photography, cinematography, CGI, etc.

Context matters, specific prompts can have only a general effect. Even word order may help. But the context is inscrutable. This is John Searles The Chinese Room activated. Plowing through prompts to get what you want is a mashup of the game of Clue, charades, and Magic 8 Ball.

To become adept at DALLE-2 is to be one of those guys that does yo-yo tricks, and I don't have the time for that. It is a useful tool, good for generating suggestions and alternate images, some with unexpected poses and gracefully thoughtful ones at that. But I'm getting good at whipping out populated environments with my 3D render skills (See 20 minute speed sculpt and #kitbash). 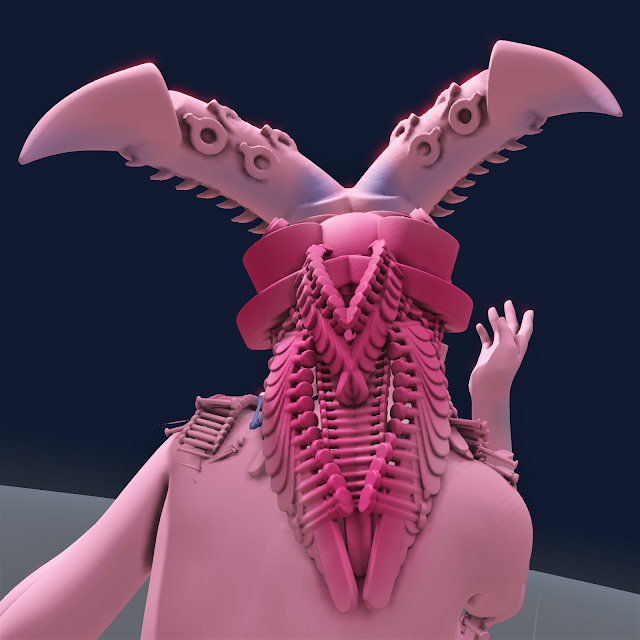 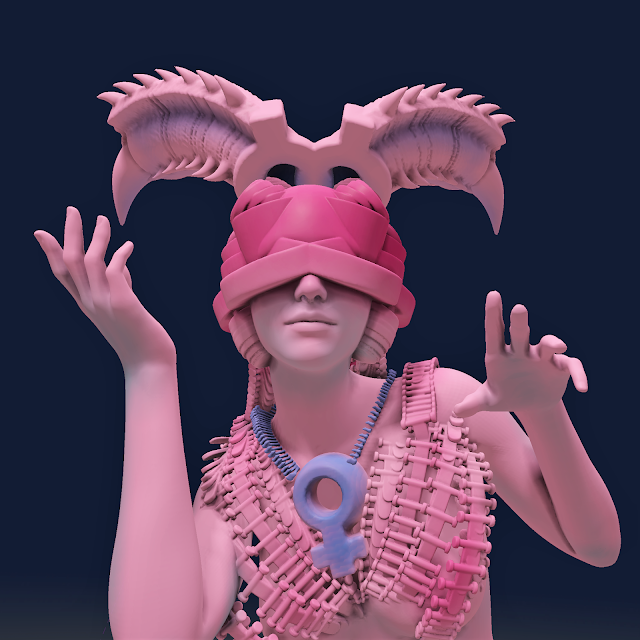 I using the variations on an image feature, DALLE-2 experienced edge effects, where the poor thing hit a wall. 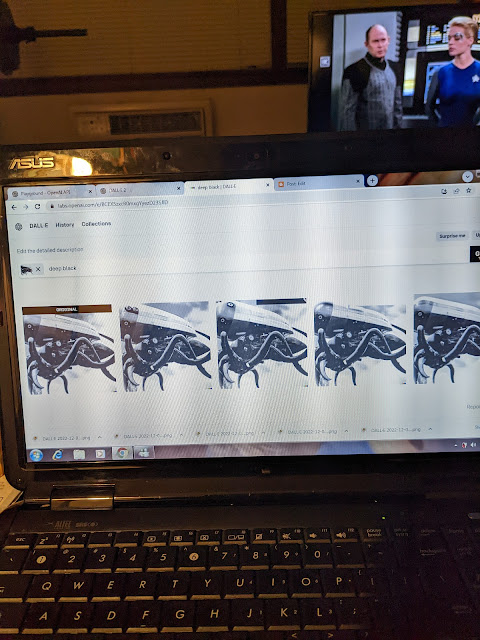 Will use again, but not reliant on it. Other things.

I saw an article about Bill Shatner interviewed on his riding the Bezos penis rocket. Captain Kirk went into space october of last year. He said he experienced profound grief up there at the Karman line. Yes, beautiful blue marble below, but looking up, nothing but black. Nothing but death.

Oh sure, there may be life out there. But in between our home and someone or something else's is a lot of death. So much death. (Right there is a giant piece of the  Fermi Paradox). A universe seemingly programmed to blosson with life has in turn a massive counterbalance of death. Bill Shatner experiences cosmic horror, realizing the hubris of crossing vast voids in a one hour episode. Bill Shatner did his part to get us excited about the adventure of finding new life, but it is obviously a poisonous lie, and Bill saw his part in that lie.

This is our home and always will be. Maybe people will make it out to space,but death is coming for them all the time, and for several thousands cubic light years around them. I mean, Earth isn't safe, but the universe is out to kill you.

Posted by John Kurman at 7:55 PM No comments: 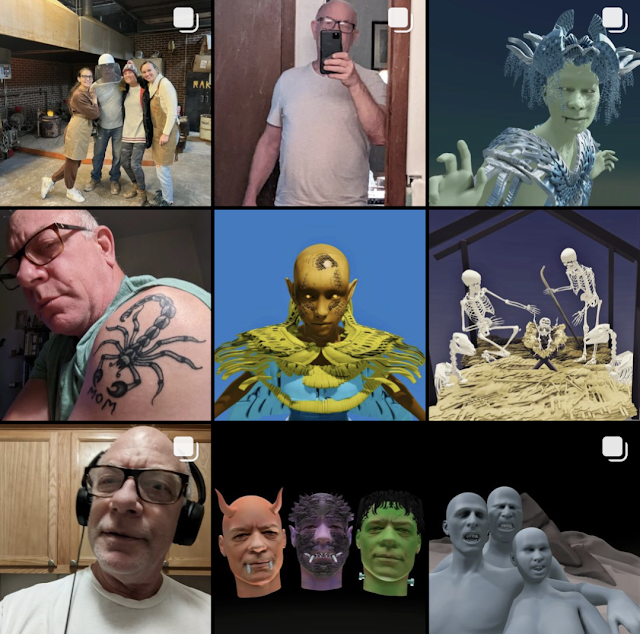 I'm done teaching bronze casting. I'd rather be a cult member than a cult leader. It doesn't pay as well, but it is a lot more fun. 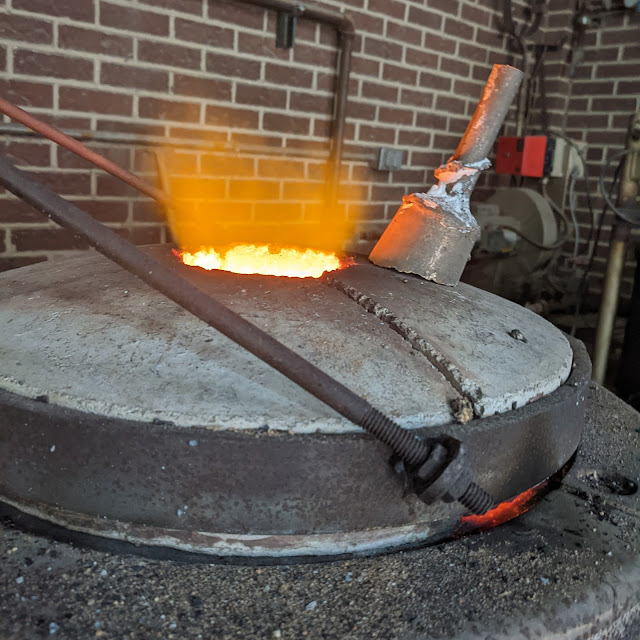 I love pouring metal. At 65, I get beat up and need more than one day to recover. (or the lockdown turned me into a big fat pig, more likely. I am classified a superior physique for someone my age despite the fat belly).
I've been playing with OpenAI's DALLE-2 and GPT-3. Itt's so cute. Here are two examples:
Prompt 1: I'm a goddamned miracle of modern science, doc.
Response:That's quite a claim. I'm sure you have an amazing story to tell, but it's probably wise to get a checkup from your doctor just in case.
It's a fucken chat bot. DALLE-2 is a magic eigth ball, unless you are a nine dimensional master.
Prompt 2: Everyone admired the grey-eyed mother's son of Ming the Merciless.
Response: He was courageous and brave, and was always willing to stand up for what he believed in. He was well-liked by his peers, and was respected by the people of his village. He was admired for his intelligence and resourcefulness, and was a natural leader. He was kind and generous, and always put others before himself. He was a true example of what it means to be a son of Ming the Merciless.
Posted by John Kurman at 7:26 PM No comments: