The Buonbouttees, Chuck and Delores. I think they are vacationing on the Moon, but not certain. I'll get back to you on that. 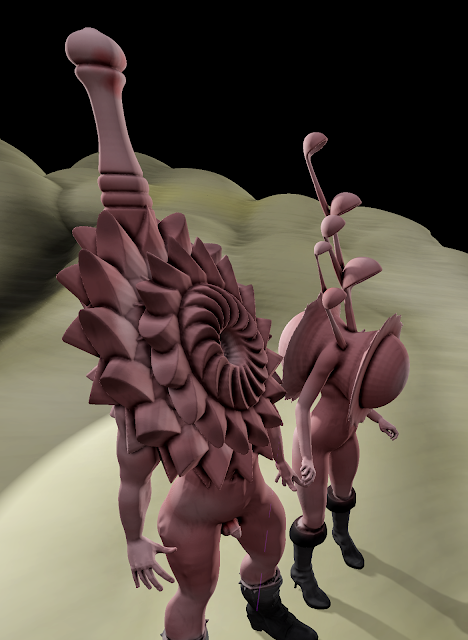 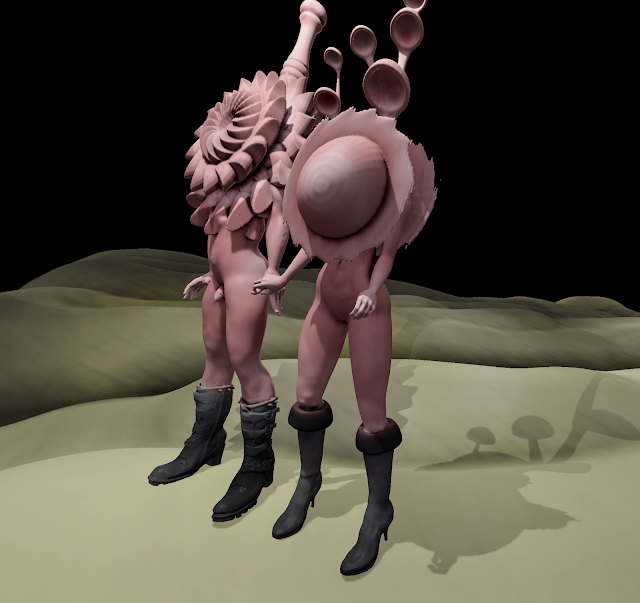 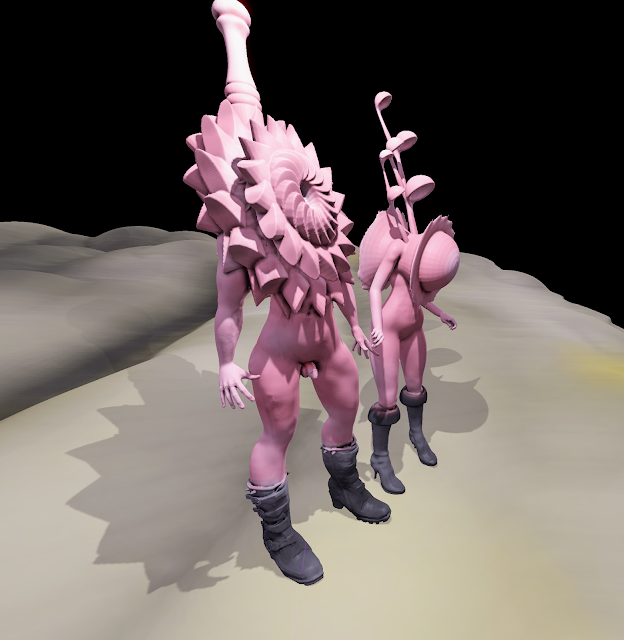 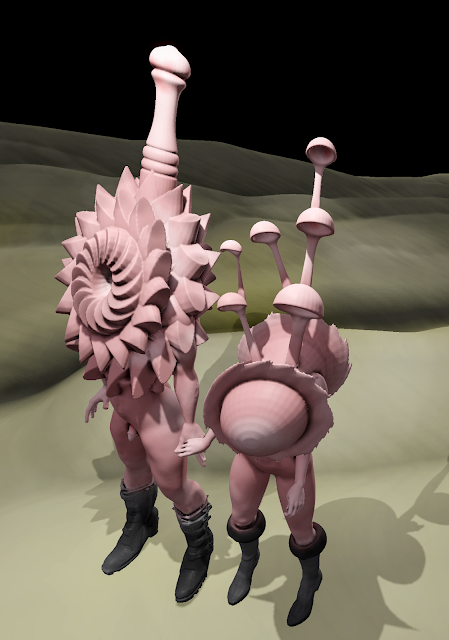 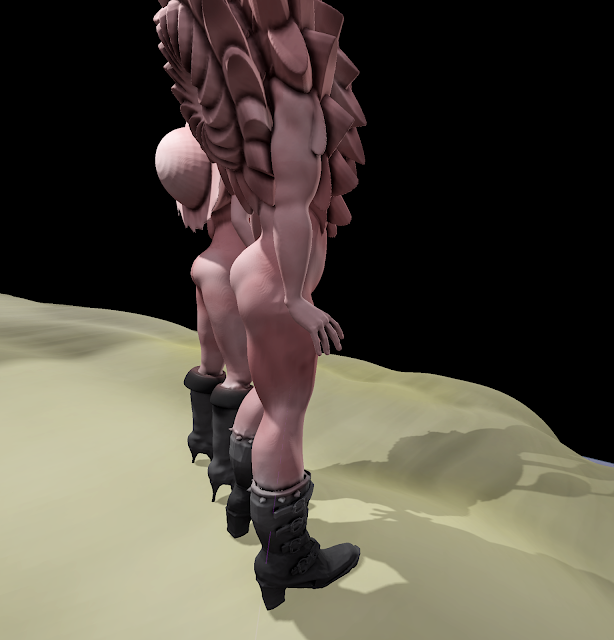 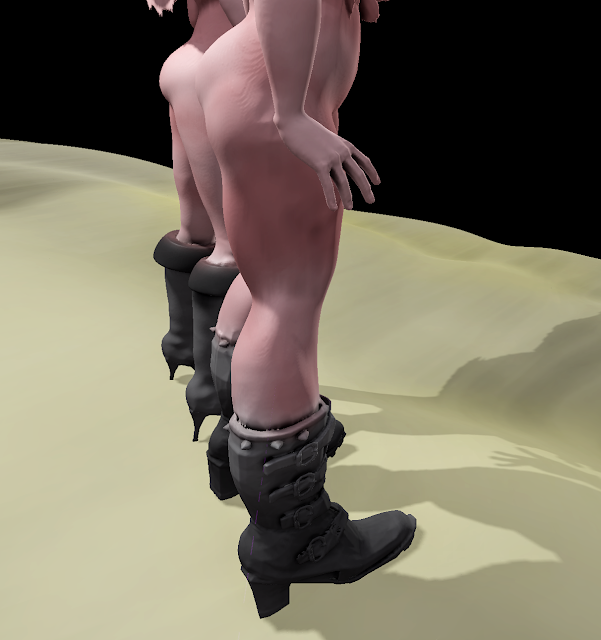 Posted by John Kurman at 7:36 PM No comments:

The Knob couple are out for a pleasant evening walk through Spiral Town. The Knobs own a shop outside of town, out on the highway. 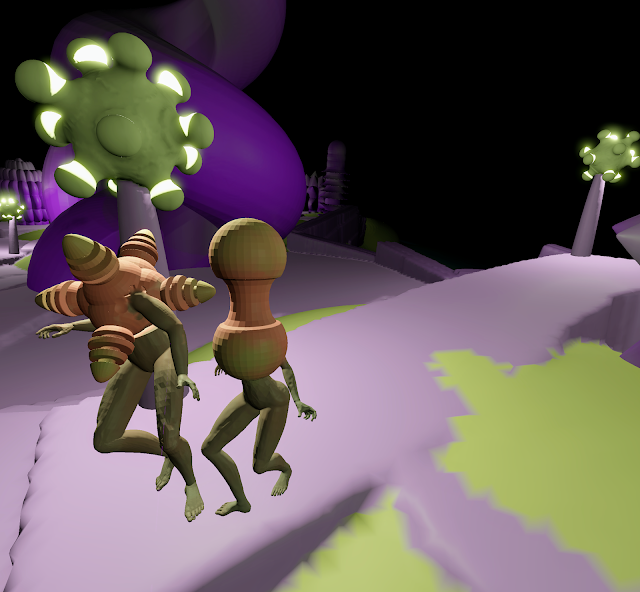 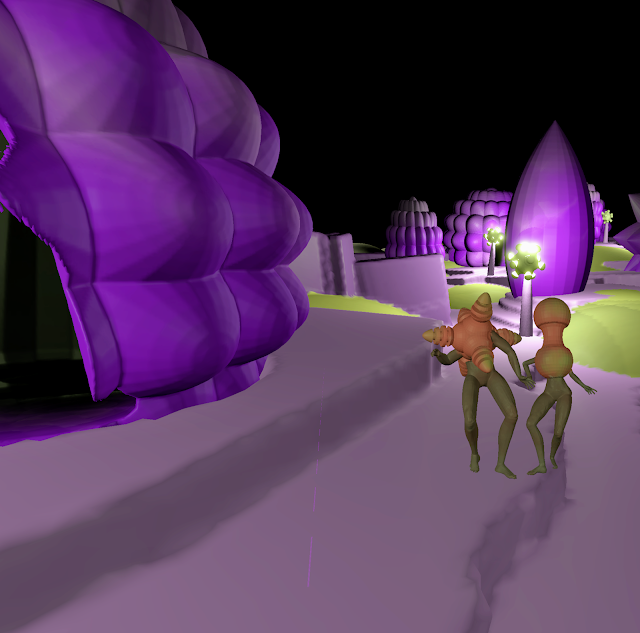 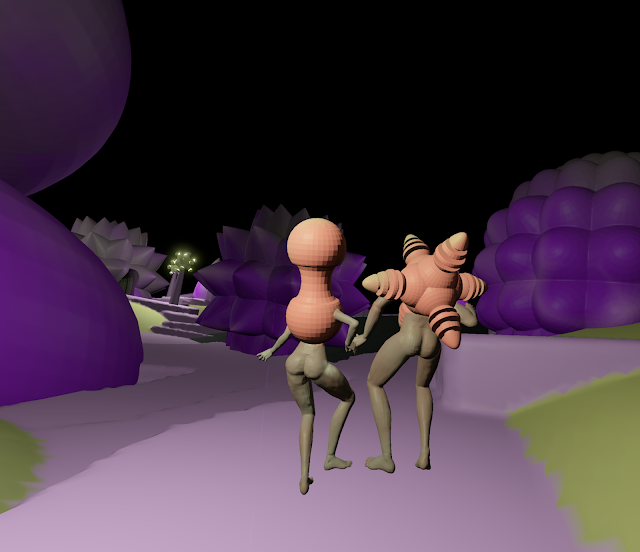 Posted by John Kurman at 9:42 AM No comments:

I rendered these Cactus people running. Not really sure why they are running: 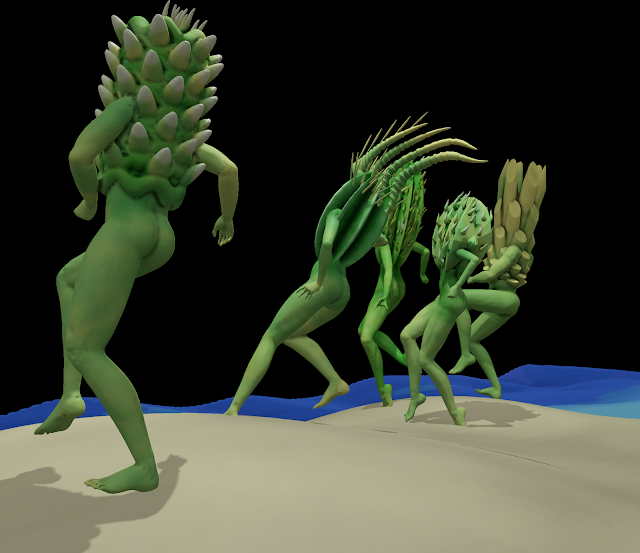 This 3D art is done in a virtual application called Medium, supported on a Oculus machine at my local library. There are five cactus people, two guys and three women. 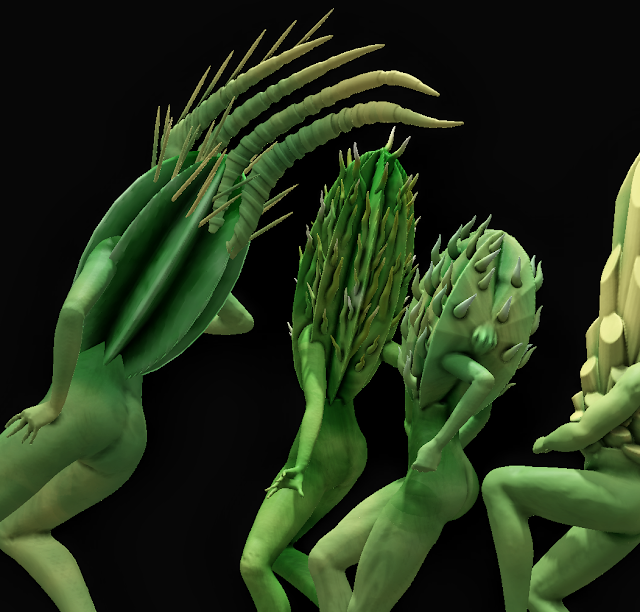 They are in a little sandbox virtual environment, surrounded by a warm shallow sea. 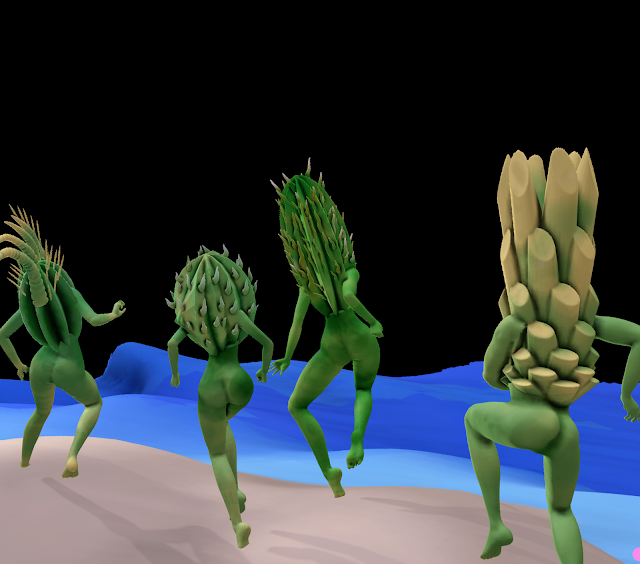 I figured they are having fun. Cactus people running around near a sea, even though that makes no sense, unless they are in Chile maybe. 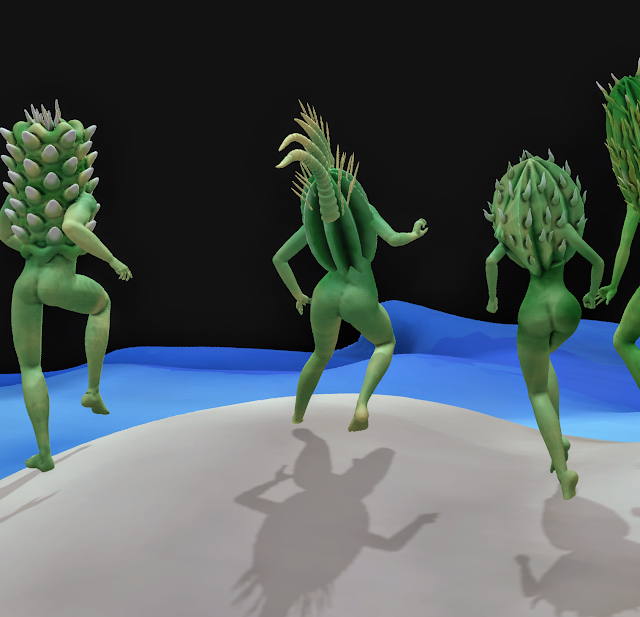 But then I realized they don't seem to be having fun. Maybe its because I forgot to put penises on the cactus guys, in which case that retracts on the fun in general. Definitely for the guys. 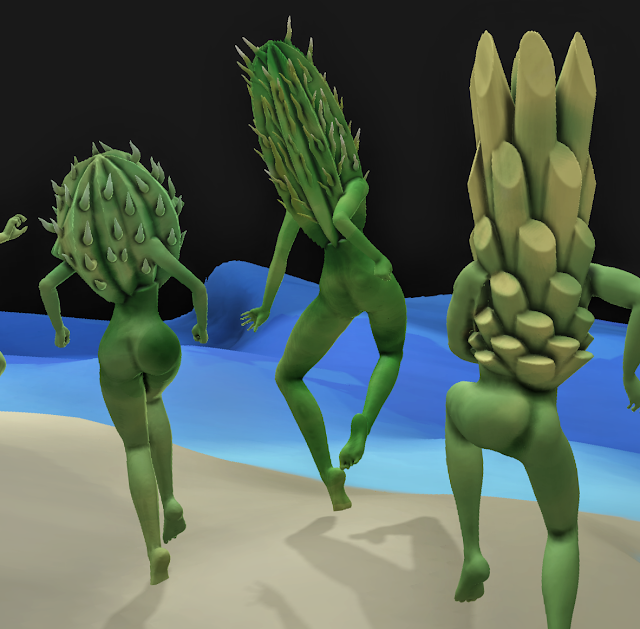 But then, I started to think there was a sense of urgency about the running. 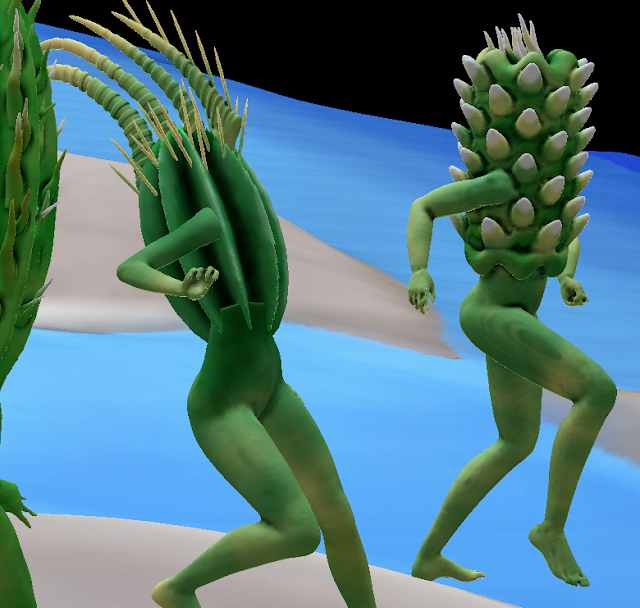 Certain amount of panic and desperation, I thought. 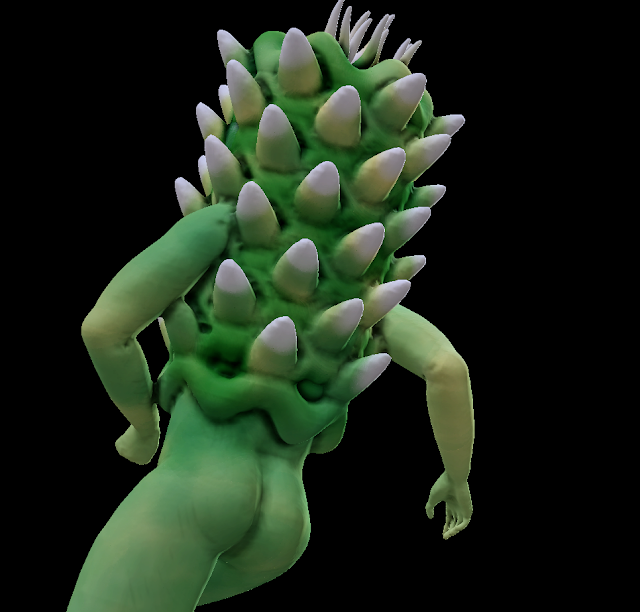 This isn't running on the beach, this is full on get the hell out of Dodge. 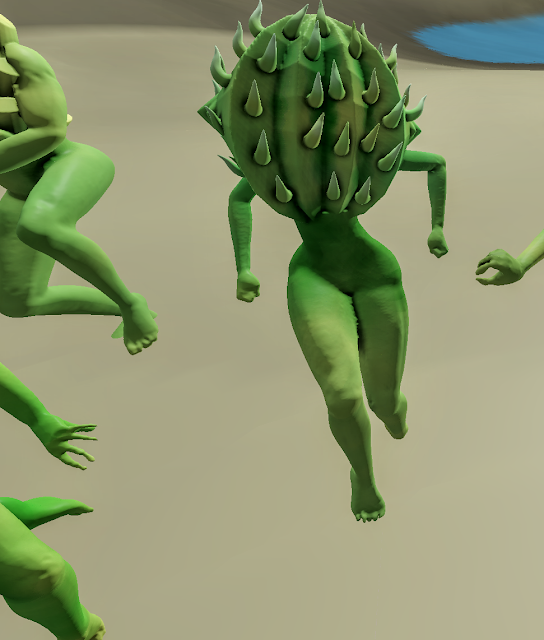 Oh, that explains it. 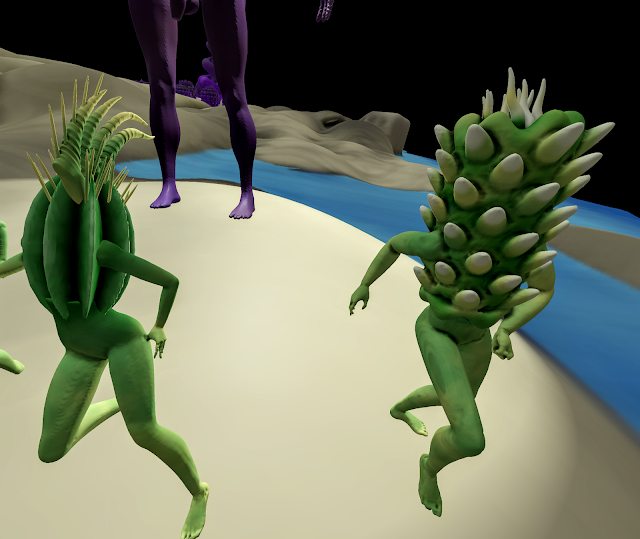 The Cactus people are in Jotunheim. 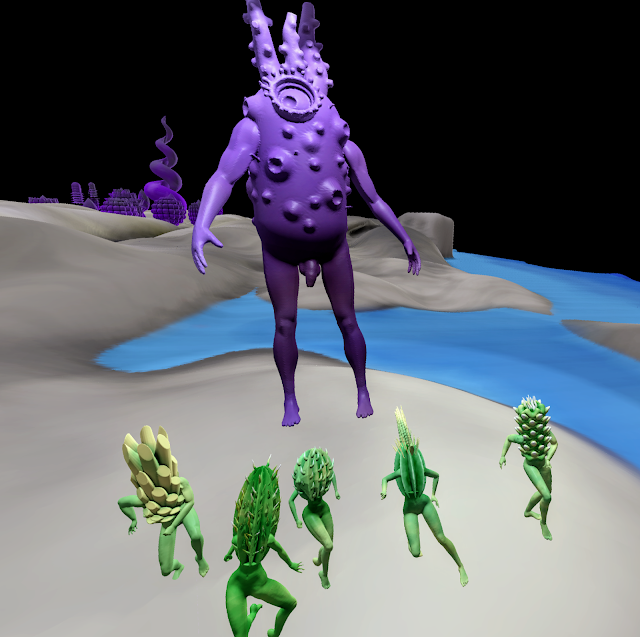 Posted by John Kurman at 9:27 PM No comments:

On The Shores Of Lake Chagan*

Last year my back went out big time. It was a mortality moment, an ability moment, a humbling moment. A moment when I realized I have a limited number of deep sea fishing expeditions left. I realized I can't go out there like Thor drinking beer all weekend and haul in Jormundgandr, that world-girdling serpent up from the undersea abyss. 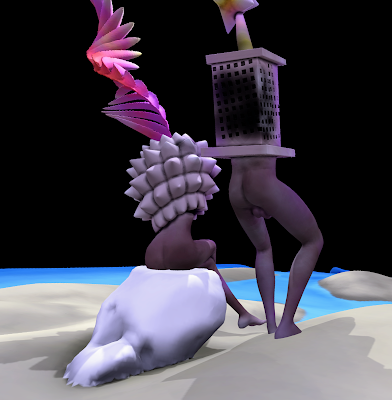 I've been a beast most of my life. A freaking bull. A Tarzan. A Viking. Even two years ago, I'd go eight hours of hard physical punishment easy and shrug it off the next day. And honestly for a (then) 60-year-old, that's pretty good. 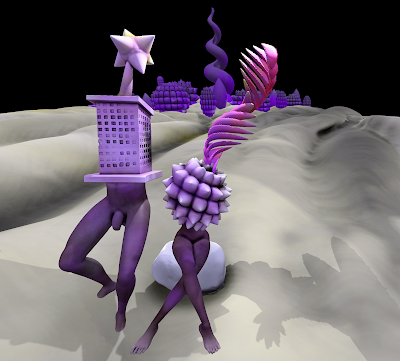 Things change. I am not immune to the heat death of the Universe. Entropy applies to me. So, I'm modifying my behavior to something more sedate. 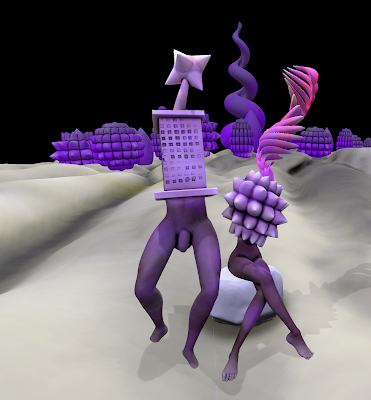 Combine this realization with the ongoing onslaught of technology, and creatng 3D art via constructive virtual reality applications, manifesting through 3D printing and traditional metal casting, means I'm not out of the picture. 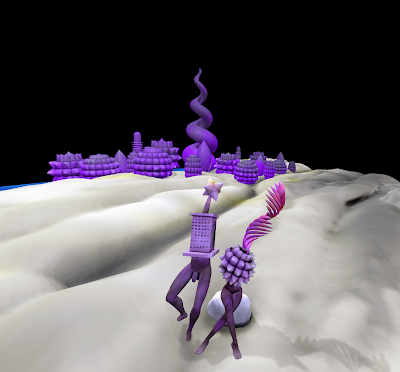 A friend of mine looks at this work and says, it's too clean, too perfect, too digitally immaculate.

Oh, don't worry. I can get it messy again. Never fear. 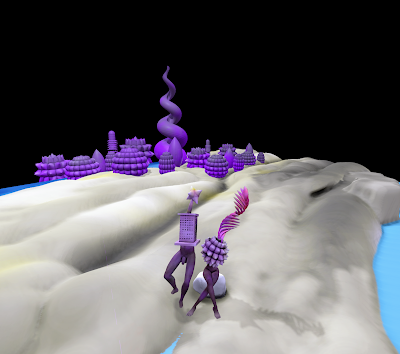 Plus, I've moved on from making people to making worlds. Not as cheap as writing, but it suits me.

*Lake Chagan was a radioactive lake created by an atomic bomb in Kazakhstan by the Soviets during their dubious mega-industrial nuclear landscaping phase. I called this piece that because it just has a Soviet vibe to it. Perhaps it is the faux onion towers of the spiral conch city. Perhaps it is brutal Stalinist apartment guy and his dressed-to-the-nines Russian lady. Also, I'm pretty sure there was a fire in brutal Stalinist apartment guy.
Posted by John Kurman at 9:20 PM 1 comment: