Sometimes I'll do my own virtual reality render of the results, like this one in Adobe Medium: 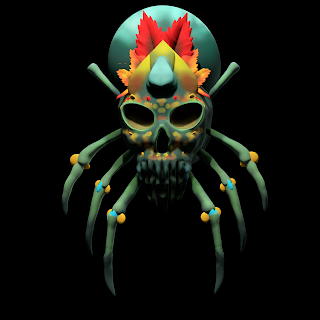 I'm also back on the bronze casting. This one is entitled "Mister Potato Chip and Friends". None of the pieces would stand so I welded them together. The thicknesses of metal vary, so the welds are not great but solid. Weld quality also suffered from poor eyesight. 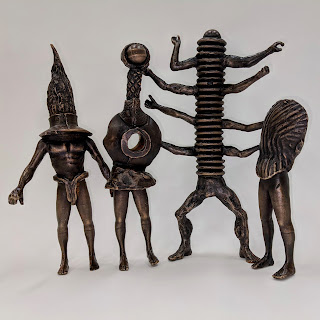 I have about fifty figures like this in the 1/10th scale, and these will be added to the ongoing piece, Grandpa's Funeral. 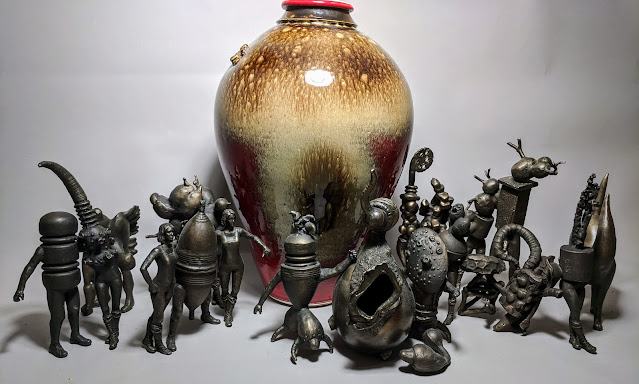 I'm a slob. I wish I'd been more orderly and methodical in constructing my memory hut. Instead it is strewn with clothes and papers and half started gadgets and boring stories just like in real life. But that's what google is for, right? I blog in google. I am vertically integrated into this animal, because it is the meanest and most evil thing on the planet. Evil as in its a fucking verb. And I am an ally.
RW 4/22/2010 Entry Death By Plastic
The Carlin Conjecture is that the Earth wanted plastic.
Stripped of teleology, George Carlin's hypothesis is valid. Humans are great distillery bees. Metals. Glass. Plutonium. Liquid Helium. Plug 'n play RNA. Plastics.
Plastics. Forever chemicals. Mutagens and carcinogens. Even the rain is deadly now.
But hang on. This isn't the first time the rain was toxic or living on Earth wasn't deadly. Life was set up to handle radiation and poisons and toxins of a younger, fiercer universe.
(Sol is the middle child of population II stars with enough metallicity to form solid planets. That's 7 billion years back, (No planets in Pop I stars? Maybe lithium. Maybe boron. Not enough carbon for our kind of life)).
Again, stripped of teleology, Carlin presents an elegant solution of just enough product killing off or slowing down producers. This is a command economy strategy which we learned from microbes.
The current problem points out the rich/poor divide. Rich people can afford to filter water, while the poor get by without. Do the poor get more fatty liver disease? Do the rich enjoy unscathed or are some disasters democratic?
Anyway, new bronzes finished just this week. I need to make larger than life. That requires monies I do not have access to. Anyway, Mama's Little Angel, and
Super Friends
I did a VR kitbash/sculpt from memory of Super Friends, which, it from bit, is instead called Superfriends.
Posted by John Kurman at 8:23 PM No comments: