i am a vivid and frequent dreamer and pretty good at recall. I won't bore you with my dreams other than I am starting to suspect that a lot of begin points in my deja vu experiences start in a dream, Weird huh?

Maybe not. We are nonlinear creatures, so atermporal intersection is to be expected. Or, if you go with Many Worlds, some pretzel of world lines, a rebranching of timelines. A time loop. I've always assumed that a time loop excises itself from existence, but maybe its just a thrill ride. Dejsa vu is exciting, but never informationally helpful.

Many Worlds, or as it is known nowadays the Multiverse implies an infitnite or very large finite, number of worlds depending upon the granularity of the Jonbar hinge. The Multiverse contains every fiction, every myth, every meta, every dream.

Book Report: I finished reading Dead Lies Dreaming by Charlie Stross.and enjoyed it almost in one sitting. Four sittings and one lay down. The book title mentions it is a Laundryverse novel, which is not a lie, but has none of Stross's put-upon occult goverrnment spook characters keeping magic a secret while fighting Lovercratian horrors. Think Tinker Tailor Soldier Spy vs. Cthulhu Mythos.

Stross realized our current governmental reality is on pace with achiev ing Lovercraftian horror and so had to change up the pace. So he has Nyarlathotep the Black Pharoah as Prime Minister of Great Britain under the New Management, and magic abounds everywhere. The Dread Majesty is budling up his fiefdom before the rest of the Outer Gods arrive. (The Chtulhu Obviously, already has a tentacle hold in the US of A)

Stross discovered a new vein to mine by approriating the JM Barrie book Peter and Wendy (not the saccharine Disney story) and using the Lost Boy gang as his characters. And he's writing two other books with the same gang. I got to tell you members of the gang were all attractive and likeable.The villain you want he should die,

Any grim fiction that exists is now fodder for his multiverse of madness. Hey Disney, and MCU, eat my dust, says Charlie Stross.

I felt Charlie had as much fun writing this as I did reading it. I find out from his crib sheets that this was the worst time of his life, losing first his dad, and then mom through a lingering illness. Suffering is good for the soul is horseshit, but creative writing to escape suffering? I can see that.

A Speedo and Black Socks to rule them all

I think I keep informed on important events. I might as well have been sleepwalking, turns out. 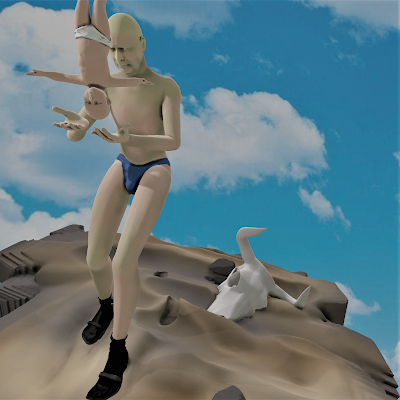 It's normal but distressing to me, who puts pride in his up-to-date knowledge and hands on facts. More distressing is being confronted by my lack of intellectual curiosity and scepticism. Case in point, you've seen this graph of productivity vs. wages. 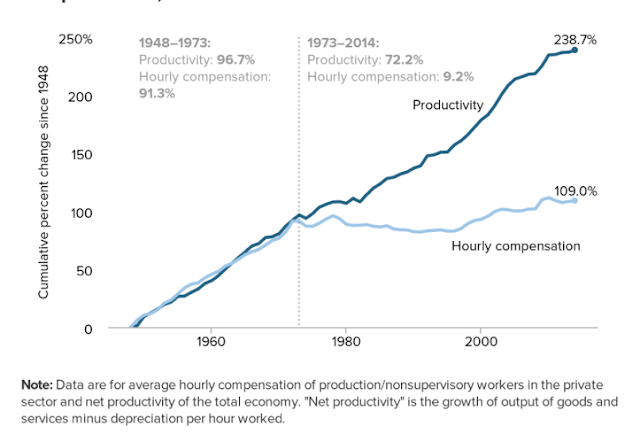 I've always taken this chart as a weapon of outrage. Speculated on what happened Q2 1972 where productivity and wages part for good. And I'm not the only one that speculated, including a fairly knowledgable economist so I don't feel so bad. My guess was the rich had attained escape velocity and no longer needed the rest of us.
But an essay Debunking the Productivity-Pay Gap by Blair Fix made me humble. Not once did I question how productivity was a measure of what. And as it turns out it a measutre of aggregated average income which makes the chart a tatuology. Empty propaganda.
Well, shit. So, what should we see? How about this? 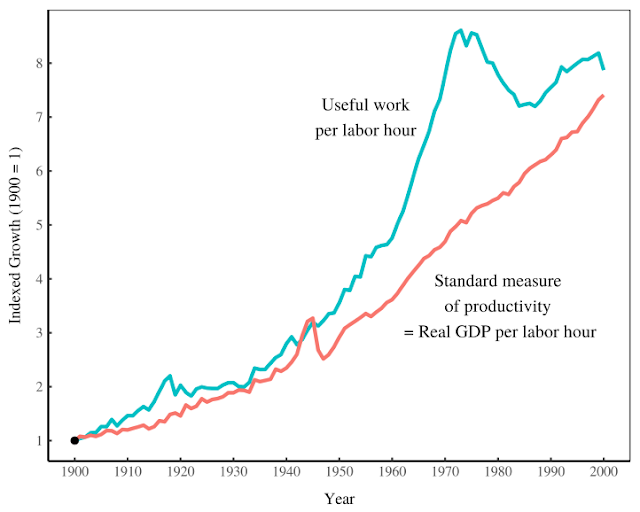 It shows stagnation beginning in Q2 !972 and a relative drop in compensation for production workers. So again I ask, what happened? I still guess the rich achieved escape velocity.
Posted by John Kurman at 7:15 PM 1 comment:

It's the one thing we are really good at. Afghanistan, currently. Ultimately, the failed state of the USA.

I find it amazing just how many elephants we can cram into one living room, and we are just not going to address it. We can't blame our blunders on youthful exuberance and head strong puberty waves. The US of A is older than the Ming Dynasty and twice as corrupt. At the top I mean. The stink of late 1970's Soviet Russia, sclerotic old men and their trust fund KGB kiddies waiting in the wings.

In order to ask, if you want to rend clothing, what went wrong?  Afghanistan doesn't start with Clinton or Carter (although it does, Reagan was Carter Lite, and Bush/Cheney had a Clinton researched and marketed world to conquer, once the juggernaut of policy is moving we get into Obama's clusterfuck, And Trump Caves and Big Joe figures he can move on, but because of political appointees, the dismantlement and privatizing, we, which is to say, you can no longer Have Nice Things

No dearie dears, the full story we gotta go back 40,000 years. And that story is called Something Went Wrong.

There's this guy who has been breeding e coli to check out evolution. The bacteria live on sugar, but he noticed one flask with an explosion of critters. He found out they had adapted to eat citrate. This Citrate Event is now recognized everywhere and it happened to us 40,000 years ago.

Looking at it from a fitness landscape, a pig flew to the mountain. How often do pigs fly?

WHAT HAPPENED??? My theory is we were partying and we got busted. Wedding planning from then until now. What's to be done? Fire the party poopers?

Yes, when they fired the party poopers, I didn't care because I was a pants shitter.

The movie treatment suggests a TV series, so morph with Hotel California, and have guest stars that never leave. Granny's Pot.

Everyone is Beverly Hills is a Satan worshipping cannibal pedophile or any phile pervert, including Mr. Drysedale. He pleads for certain people not to be eaten, for a return roles or surprise guests, otherwise he and his wife often sit down for vittles with the Clampetts.Surprise guest like Vincent Price no way anyone eats him. Did I mention they try to eat each other? They hire assistants that fight them to keep them from eating each other. Crank the aggression dial. Vincent Price comedy gold. He would be on until CBS cancelled it.

More 3D and VR apps, this one sculpts a head shot. I can take anyone and make them anything, anywhere.

Posted by John Kurman at 7:35 PM No comments:

The Man in the Green Cap

That's my name to the neighborhood crows. I realized the crows have known me for 12 years. So that's, four? five? generations in this murder that know me. 12 years walking, running, biking the rich white suburban neighborhoods south of my shitbox apartment.
I've told the story before about the honor I received last summer when crows on the ground ignored me totally as I walked past, maybe four feet from them. I ignored them as well, but fortunately I had my sunglasses on so I stole jealous sideways glances. They were aware and nonchalant. Warriors. How can such young things be so canny? (It's like octopus, with a short life, but starts out smart. Epigenetic memory?? Shrug)
I was dealing with mama and babies. The babies are sister-brothers now and letting everybody know when I go for a hike. Their caws echo out over grandma and grandpa land.
I don't know how I got on their bad side, or if I am.
I had what I am tempted to call an LSD flashback on my walk today.
All of a sudden I had the distinct impression that all the plants were noticing me, knew who I was. I had never considered the idea that they'd been watching me for twelve years. Anyway, the obvious paranoia turned into a grace of living universe, even the pavement beneath my feet. I experienced joy. Would that I could have prolonged that jewel of time, but tripping is not altering reality.
Item: I had read a science news article how plants might actually have eyes or the equivalent. And then out on my walk I realized what a bunny I've been these past 12 years, thinking I was apex predator. All this time, like a small town, nature knew my business, my boring robot sleepwalk orc ploddings.
Hey, here's some pictures.

Madison imagined the state as world orbiting a strong federal sun. it was shaky for four score and seven and then flung apart. The solution was to increase the gravitational pull of the sun. 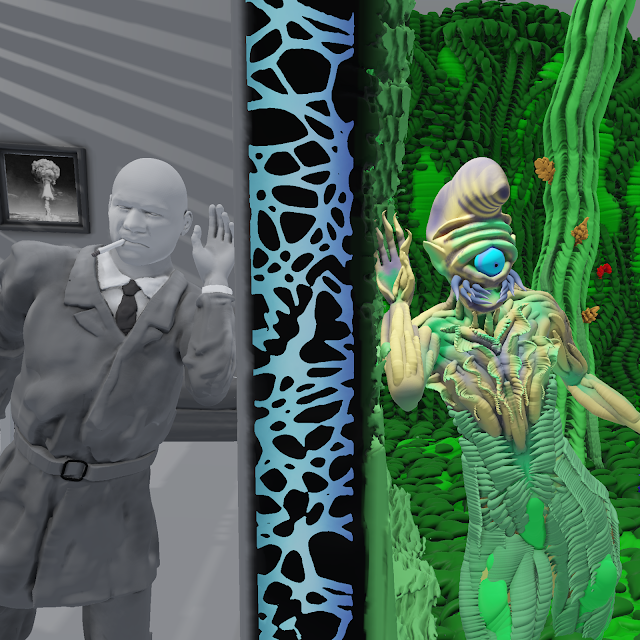 Brane and brane! What is Brane?! You are not morg! Your are not imorg! What are you?
Cigarette Johnny heard a noise on the other side of a wall facing air seven stories up. Who was talking? "Some kind of jiber jabbber" Johnny coughs. $th statge lung cancer but he won't know for months, 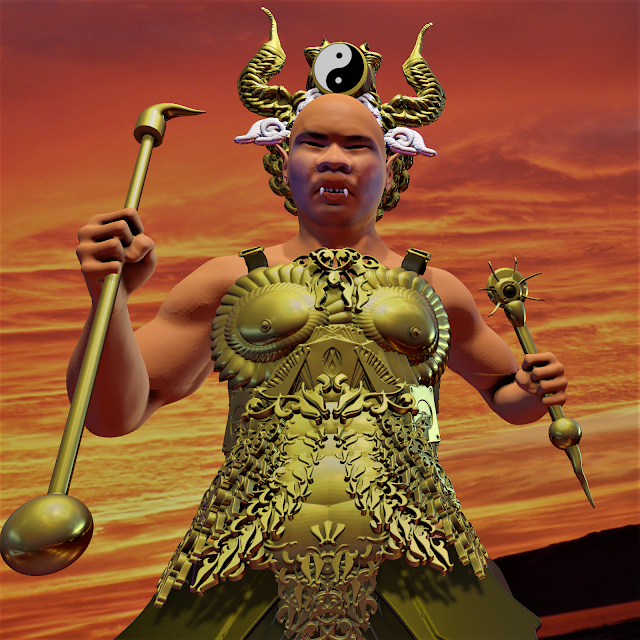 "This is my demon. The god I must appease in order to regain my heart, my blood."
I'm surprised how many people haven't seen Big Trouble in Little China. If you haven't seen it, go see it. I'll wait.
Back already? Fun, right? So, that monster on the back of Jack Burton's truck at the end of the movie? Everyone was like, so, a sequel? But a sequel never came and rightly so. It's a cute puppy of a movie but who needs more puppies?
Anyway, if a TV series had spawned. I see two easy spinoffs. Egg Shen, that little shit village sorcerer, ahs adventures on vacation, kind of like Kolchack: The Night Stalker and, like Kolchak, only one season of 20 episodes,
Or. turns out that monster on the back of Jack Burton's truck is now along for the ride because he is Jack's servant. See, according a geas of magic, the monster gets inherited to the murderer of his former master, Lo Pan. Jack Burton does not work as a TV series, but it does as a movie. That monster thing learns to talk so the and Jack are trucker cop team that has to face what?
"China is here, Mr. Burton" Meaning there's black chinese magic in every chinatown across the US. Little shit village sorcerers everywhere coast to ghost. Maybe it could be a TV series. Jack Burton and Slobber. And after a while, a menagerie of lost magical creatures that worked for Lo Pan, and eventually meet up with Jack Burton, Jack of All Monsters.
Posted by John Kurman at 8:04 PM 2 comments: