Knock on wood. Here is a picture of a fascinus, a penis charm to ward off evil. 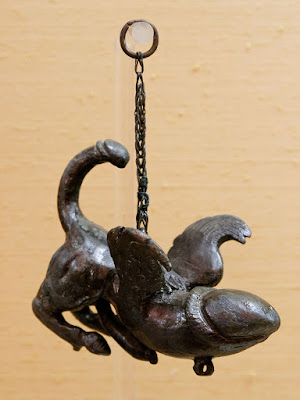 One wonders why Mr. Spock from Star Trek (himself bearing a resemblance to Satan or some other dark elf from Fairyland) found everything fascinating. Lots of distracting bonerific stuff out there in the galaxy to distract the gaze of the evil eye, I guess.

So, how did I end up checking out boner, buttock, and vulva charms? Well, this rabbit hole started out with the news item about the arson of a house in Poughkeepsie, NY. The house was a "Halloween house" used by the Church of Satan. Someone burned it down. What caught my eye was the house was located in the "witchcraft district" in the city. This lead me to read about the witch houses of the Hudson valley. This article documented the strange objects hidden behind walls or secret rooms or voids within the houses built by the early Dutch colonists of the Northeast.

Many of these artifacts were eventually recognized as apotropaic totems or objects to ward off evil. I myself, helping with the rehab of an old 19th century house in NW Indiana back in the 90s, came across objects and carvings in the walls . At the time we were incurious and only moderately creeped out and paid it no mind. But now, I recognize it all as a method to ward off evil. Not all the objects are house wards. Witch bottles, containing human hair, finger and toe nail clippings, bent nails and broken pins, were used as personal charms to distract evil spirits from inhabitants, especially children. The idea being a spirit would be lured to the bottle via sympathetic human remains, there to be trappped an injured or killed by the "dead" nails and pins.

Anyway, this lead me to read about apotropaic genitalia in all its forms. Penises are used but also vulvae and buttocks. This no doubt is why so many vagina dentata carving sare found throughout the world. Bare buttocks were also utilized, such as the Aphrodite Kallipygos statue. 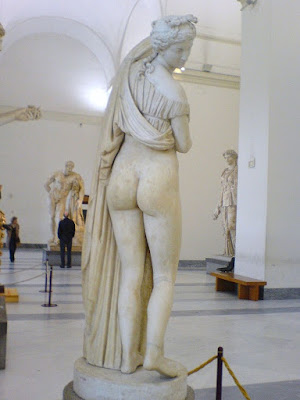 So, in American culture, perhaps the strictures against nudity go beyond mere prudish or squeamish Puritanical bias, and recognize the power of the naughty bits.

We are the Antimatter Universe

Item: I bought the Oculus Rift-S and love it. But then I heard a rumor that you would have to log online through Facebook to use it in your own home and I said out. No more contacts for this computer. It's possible that Facebook is fucking with me through the thumb drive, but otherwise cut off from the web and they miss us, aw, sweet.

In fact I've frozen most of my workflow to where I like it. No more updates unless it broken. 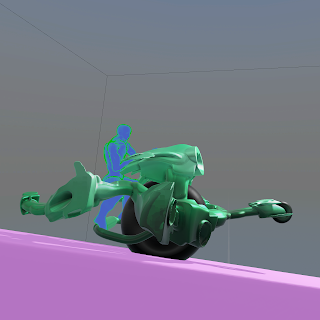 Anyways, so through my library I got The Irishman by Martin Scorcese and also Westworld.Season 3.

Now, most folks know that the original Westworld movie was about an future amusement park where the robots run amok and slaughter all the guests. The chilling line was something like "they've been designing their programs in ways we don't understand".

Yul Brynner was The Man In Black and his bunnies were James Brolin and a surprisingly surviving Richard Benjamin. God Bless America's Jews. They gave us TV sitcoms and the Bomb.

Anyway, I could google it but I'm gonna assume that the HBO reimagining addressed the reason the robots slaughter the humans. The robots are people. They're not human people, anymore than a smart octopus would be a human people.

It's a Greek tragedy or a Norse comedy take your pick.

Point being I'm gonna spoil it for you. We're not all robots but we are used like them.

And that also is the message of the Irishman. You do what you're told, we got no problems.

Point being follow your loop or get pulled from the Park.

Posted by John Kurman at 7:26 PM No comments:

This Is the Future Liberals (used to) Want

1/6/21 Screw the Putsch Day.  I took a nap this past Wednesday. I used to not like naps. Now I know it is natural for us to take naps. I woke a little after 2pm, looked at my phone, and found out affluent white hooligans were trashing the Capitol building, hunting down Congress critters, selfie-stick trolling for monetization. They finally got to be hippies and yippies, and unlike the ones in the 60s, actually occupied the Capitol building.
Suck on that, Abbie Hoffman. You couldn't even levitate a Pentagon.
There were lots of expensive cosplay gear, or at least stylish for a hardware store.. Everyone was scrubbed and laundered (especially buffalo hat guy).  This was Batesian mimicry, blue collar coloration. A harmless creature aping the colors of a more deadly animal. And there were dangerous ones in among those alpha males, but most were holy shit your dumb neighbor. And then they went back to their hotels and partied. So, mostly affluent white hooligans. And leave it at that.
In my hypnogogic state, an advantage to being fully awake, I wondered, how the fuck did they get in? As an inside job, cops complicit? More than one inside job? Was this Trump's stupid coup, a Rube Goldberg machine his 10 year old mind deemed perfect to get him 4 more years? Or did Pelosi and Mitch realize the trillion dollars in optics this would bring them? A she-devil's bargain struck to save the Republican party? Or some larger and nefarious 9-D chess play from the Westworld hyperomputer? Or is the prosaic explanation of incompetence not enough to ease suspicions?
One must never rule out the lowest common denominator. So, yeah, still, several inside jobs, corporate entities and families rummaging about. I'm looking in the Mercer's direction. Aliens.  Or, having just binge watched Westworld Season 3, definitely an AI.
What's next? More blood that's for sure.
Posted by John Kurman at 7:46 PM 3 comments: