If Trump is reelected then you know either Jared or Barron is the Anti-Christ.

If I were writing a movie, Barron would be the son of a jackal mom, but in reality yeah it's Jared. Jared got the Damien Thorn AND Portrait of Dorian Grey thing going for him. I'm rooting for Jared.

He got the comb-over barely hiding the sixes on his scalp.

He and goat daddy bought the 666 building and then sucked Qatari cock to clear the debt. This is sounding more and more Ghostbusters.

Which is why the Beast, DJT changed his digs to FLA.

We judge ourselves by our past pitiful enemies like the British Crown, the rebel Confederacy, Hitler, the Soviet Union. They're nothing compared to what awaits us.

So, if the Antichrist is for real, then we might as well be living in a simulation. Vive le Purge. Unscrew the head of anything that gets in your way because it doesn't matter. You're not real. Nihilism rules. 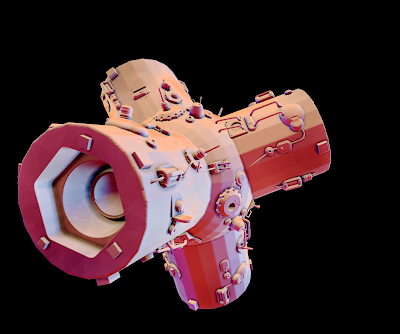 So here we have a one hour kitbash. Which means I did a 3D collage.

I always figured a fighting space drone would be a tetrahedron. Engines are weapons and weapons engines. Tight center of gravity ready for any threat from any of six corners. Unmanned of course because raspberry jelly.

The fragile tubes and protuberances on the outside?

Either: don't care, first hit is the last hit, or

Yeah, no magical shielding so, drone get taken out means lots of drones.

Lots of drones means soon you get machine-gun-bullets-at-Paschendale levels of drones.

Which means we are doomed. But you knew that.