Consciousness as a mirror of the universe

My dad died when I was 26. Towards the end, he'd take naps. I would sneak in to check he was breathing. I found out my brothers did that as well. Dad had perhaps six minor heart attacks, and told no one. But you can't hide suffering. We knew things were fucked up. Plus, this is back in the Reagan Recession and no money is coming in, marginal money coming in.

It didn't help having an alcoholic drug addict living in his basement.

And then he dies and that is his last impression of me. A bum. A slob. A drunk.

The shame is not as sharp now as it was then, but it's still there.

Mom took up a career as a teacher.

I ended up being in her 4th grade class when she was a student teacher. Everyone laughed when I called her Mom instead of Mrs. Kurman.

Mom, getting her MA in Education, tested her kids with the Stanford Binet IQ test.

I always wondered if Mom, in scoring the test, added points because we were such nice boys.

But no. Eric, the Smarter Older Brother of my Sherlock Holmes. is smart motherfucker.

I've wondered if their indulgence made me a slob. I have to dismiss this as I'm just a slob.

Had nothing to do with Mom or Dad at all. Maybe Uncle Ed? They say I am the psychic twin of him. But. Nah. 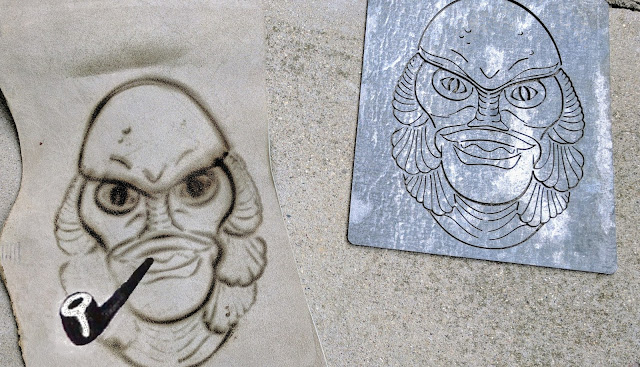 I like the look of burned leather. I think that punched metal and flame and give you water color gradations of burning on leather, but since I am a slob, I won't pursue it too far.

Unless you would like a laser tattoo leather goods, jackets. The trick is you don't laser the leather, you laser cut flame tolerant metal templates and place them on the leather and flame-o she goes with the propane torch. I need more control of patterns of dots.Then I can do any tattoo.