Fair is Fowl and Fowl is Fair

Funny how we are a microcosm, and the physicists' story of  heat death is aptly reflected as our own. Lives and friends and loves snuff out or move away, like the stars in an expanding universe. An increasingly lonely universe.

More proof that scale is invariant, that some ring of numbers are constant everywhere. Like the those infinity stones in the Marvel movies, maybe. If so then Penrose is right about cyclical creation and he owns the stones. A cyclical universe not necessarily infinite, but with very large cosmic number finitude. 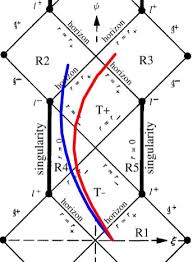 Or not. Regardless, it suggests time travel without consequence. The Penrose diagram is for a Kerr blackhole turned into wormhole. This is more properly the Homer Simpson universe where the universes (labeled R1, R2..) are connected top to bottom, side to side making a toroid: a donut universe with the black hole as donut hole. The ring singularity is all singularities. Which, there you go, wormhole = time travel and probably by sticking a fork into a toaster as Homer Simpson did in a treatment of Ray Bradbury's "A Sound of Thunder". You know, the one where the time travelling hunter steps on a butterfly and screws up the future.

But there's a suggestion that the universe is more robust due to entanglement. That a "wound" made in the past will heal in the present. Here's the egghead article, and the English translation:

To simulate time travel, we sent qubits through the computer gates in reverse order. The gates manipulate the qubits and represent time steps as well. Then we damaged information in this simulated past by measuring just one local qubit, while all the other qubits maintained their quantum correlations and remained entangled. After the damaging measurement, we ran our forward-in-time protocol and then measured the qubit’s state: it had returned to essentially the same state it had been in before backward evolution, plus some small background noise. Because the initial state of the whole system was strongly entangled in quantum correlations, the long complex evolution essentially recovered the information of the perturbed qubit.  To our surprise, we not only disproved the butterfly effect in a quantum system, but we also found a sort of no-butterfly effect, as if the system wants to protect the present.

So, if this holds, we have a whole new amusement park. I'm not the first to think of it. Robert Silverberg, who thought a lot about time travel, wrote a story where the protagonist was a time travel tour guide. He mentions how each time he takes a group to an event like the Cruci-fiction, the crowds get larger and louder. They are not worried about changing the past.

Which gets us to Wild Time Tours. Go back in time, do whatever you want. Tread on butterflies. Unscrew the heads of dinosaurs. Kill Hitler. Kill Jesus. Nuke the Holy Roman Empire. What's your fantasy? It doesn't matter anyway. And you get videotape.

I myself an part of the Famous Peoples Assassin Squad. I've killed Caesar, Hitler, Ghengis Khan, Stalin, Mao in the bathtub, Ronald Reagan and Jimmy Carter debating, you name it. The crowd reaction shots are the gravy. Does that make me a psychopath? Well, then it was Fate, weren't it?