What If I'm A Trollbot Swarm And Don't Know It?

Chatbots are getting better. Oh, it's true, it you look at the agents on Facebook Messenger, or the latest Microsoft Taytweets disaster, you'd say that they've a long way to go. Still, I've met people a lot less engaging and interesting than some of these chatbots. And an instantiated swarm of these things, operating on a cloud, talking to each other, imitating people, friending you on social media, it sounds like we've malicious times ahead of us. More than mere shitposting on tumblr. And those are just people. And when a computer shitposts a torrential shitstorm of crap, what's a human to do? 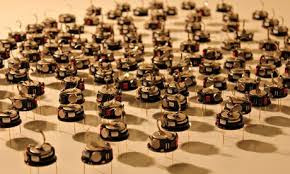 Surrender the internet to the bots? Surrender anonymity to verifiability? Are we to blockchain all comments and postings? Set up a provenance of identity? I don't give too much of a fuck about anonymity, because frankly, its to my advantage to be known out here, warts and all.

And who's to say I'm not a chatbot swarm already? How could you tell?

Don't know why anyone would want to, but they could scour the net for my shit, search for keywords, parse my prose, collect my links, figure out my likes and dislikes, develop a writing style that is indistinguishable from mine, perhaps is even a better me than me? And if they is all malicious, I spend the next 20 years apologizing?

Fuck that. I'll go off the grid first. Or maybe not. Am I to hire a trollbot army of my own? Do a preemptive strike to identify all my shit as done my therealjohnkurman.