I submitted an application for a residency at Kohler Art Center. My proposal was to produce objects from broken molds. I'm the one breaking the molds. The idea is to break them in interesting ways, and to somehow try to control the spontaneity of the breaking.

Control the spontaneity. So, now that we are all done laughing...

I've spent a good technical portion of my art career learning how not to break molds. Broken molds, when casting glass or metal, are very annoying.

I've done a pretty good job of not breaking molds. But when molds do break, they produce some  rather interesting results, cracks, cracked surfaces, and leaks that, in glass and metal, are sometimes more interesting than the stuff I'm casting, or make the stuff I'm casting a little more interesting. True, at the moment when it happens, I'm not that thrilled, but later, in calmer circumstances, investigating the results, there is fun stuff going on.

So basically, rather than wait for acceptance in a residency, and then just show up like a bumpkin and say, hey howdy, I'm going to break molds for two months, got any plaster? I decided to start now to get a handle on things and see what's what.

The first thing I did was to take some old plaster molds and break them. Actually the first thing I decided to do was to produce objects in slip-cast clay or wax, as the feedback is immediate and turnaround time on making the next batch of molds is short, so I can go through many iterations of developing techniques pretty rapidly.

So, I took two old molds from my wax casting library, and broke them. Then put them back together, then slip-cast clay into them. I wasn't sure what would happen afterwards, but I saved the objects by bisqueing them for documentation. 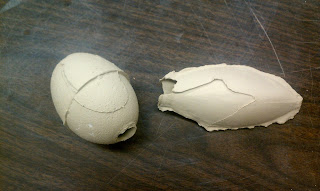 I found it is really hard to break plaster. I mean, you really bash the shit out of it, which often results in total destruction. So, then I says, alright, this is probably a fork. 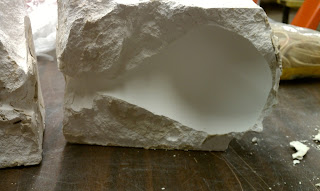 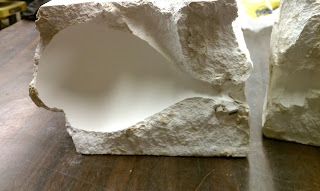 (I bashed the above mold up, and slip cast the object, a balloon, which actually is a very creepy looking thing). 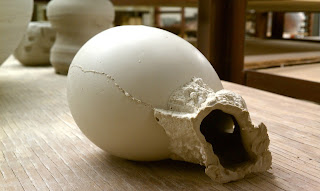 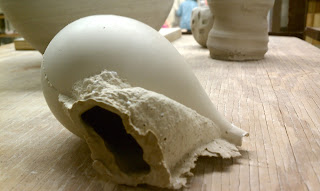 Fork1: Either learn how to break plaster in a more gentle fashion, by tapping the plaster with a very large number of small impacts, or find a way to weaken the plaster.

Uh, duh. When you heat plaster, the water, which is the thing holding the plaster, leaves, and makes the plaster weak. So, I put a mold into a kiln, took it up to 400F for 12 hours, and drove pretty much all the ager. Like 98% of the water.

Success, but too successful, because now the mold is too weak for any of long term manipulation. 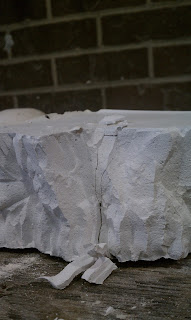 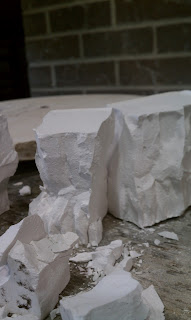 Fork 2: Either play around with the firing schedule (in time and temperature), or make another mold of the object using the existing fracture lines as parting lines for a multipart mold.

Today, I tried out fork 2, by making a plaster mold, and firing it up to 400F for 4 hours instead of 12. Success, in that mold lasted a little bit longer, but still fell apart. So, the plan is next to try firing the plaster mold up to 400F for two hours. And if that doesn't work, then firing the mold at a lower temperature. 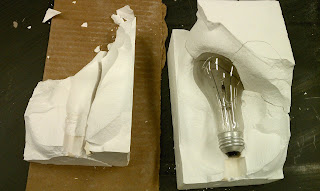 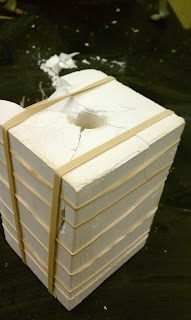 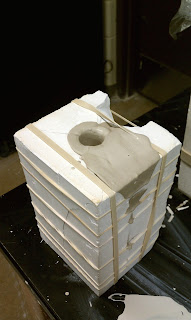 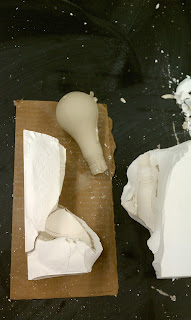 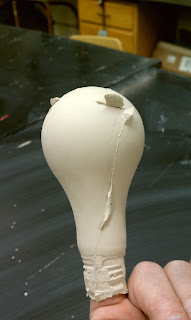 The object? Well, I had to change a burnt-out lightbulb, and said, hey as good as any object.

Got a nice smooth surface, good recognizable form, with varied associations. So there we go.
Posted by John Kurman at 1:49 PM