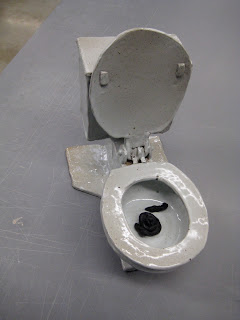 The SF writer Theodore Sturgeon once said "90% is crap". This has been interpreted in various ways, but my interpretation is that 90% of what is out there is eventually destined for the dumpster. Don't matter what it is - art, literature, philosophy, scientific theory. In our Consumer Age, it is eventually recognized as crap, and tossed. And rightly so. Sometimes it takes longer than other times.

It does not appear so in our Modern times, but I feel the encouraging trend is (hopefully) towards more sophisticated tastes and judgment.

It will take some time before good taste finally kicks in. And so, throughout the Modern and Postmodern periods of Art, we, the viewing public, must put up with the usual symptoms: Self-adoration, leading to self-flagellation; strained attempts to seem "fun" and/or "edgy"; pitifully infantile use of shock and surprise to gain attention; ham-handed use of marketing attempts in 'branding', 'demographics', 'peak saturation', etc. and a confusion of brute force combinatorics and ADHD spontaneity with creativity and originality. 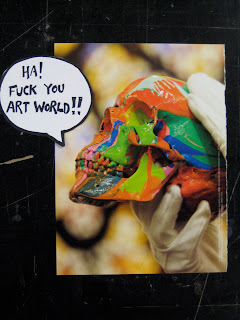 Once again, I am insulted by the latest abuse of my senses by contemporary artists. This particular artist (work off to the right), whom I will not name so as to avoid providing even more recognition, sold a POS* hastily painted plastic skull for almost 20,000 Pounds. I've found it all to be quite embarrassing, to say the least.

These symptoms of disease in many respects ape and echo modern politics and society, and, I think, are really nothing more than an entirely human reaction to future shock. Things are changing faster than artists can comprehend. Science (at least since the atomic age) is much sexier than art, and real life is even stranger than fiction. How can you compete with this?

Obviously, artists are not equipped to compete with this.

Thus these stumblingly inept and awkward attempts at garnering attention. "Look at me! Look at me! ME! ME! ME!" doesn't work anymore. They are just one more voice in an incredibly unruly and even more noisome and obnoxious crowd. They really are, in a freak-show world of Predator unmanned fighter drones, inbred Mormon cult families, cannibal hobbyists, kamikaze Islamic fanatics, gun-totin', fuel-oil-and-fertilizer bombin' White Supremacists, reality TV, always, always at least two steps behind the times. Why, its a wonder that artists even try.

It's not really the art world, is it? It's the world. I think Alvin Toffler was on to something with his idea of Future Shock. There's just too much information, too much acceleration, going on in the world, and anyone who wishes to be creative has either to try to ride the leading edge of the Wave (and fail, always), or find a nice spot behind it.