Around 2014 I started building a plaster mold collection at the college for bronze and clay. All gone now, stolen or thrown away. Still, over time I made lots of waxes from those molds and tossed them in boxes. Today I have three boxes of waxes.
I've thought about having a Frankenstein Party. Go through my stuff and combine it like a variant of Exquisite Corpse. But that doens't sound all that interesting. It's what I've been doing, at the outset of making an art object, but it was always just the beginning.
Find The Game    =  World Building (characters in a world)
Raise The Stakes  =  Perspective Shifting (character interaction, expand the world)
Play to the End     =  Action Generating (let her rip, with callbacks and connections)
I talked about The Harold before, a generative procedure for long form improvisation developed by Del Close and Charna Halpern. I thought about those boxes of wax parts and I said how can I use the Harold with these? It would seem an obvious thing to just substitute art or music or poetry for comic performance and surely smarter people than me have done it to make jazz and other collaborations. I looked for diagrams, found one, studied it, and finally it hit me. 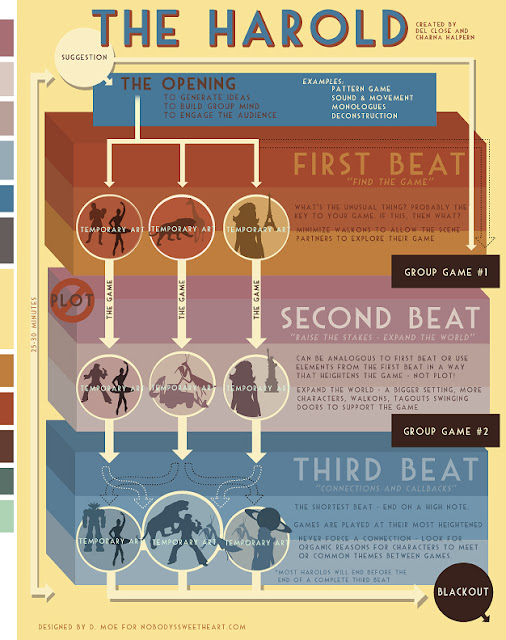 I finally noticed a scene or "beat" as they like to call it, produced a temporary art. Well, duh. More improtant, the Harold can be recursive, both during the procedure and results input as new values in a Recursive Harold. (Although that's for another time).
So, do I need other players in this game? It woud be more fun.
Posted by John Kurman at 7:49 PM