The Eemian, the last interglacial, taken from the river Eem in the Netherlands. Eeemian also known as the Ipswichian, the Sangamonian, Valdiva, Riss-Würm, all referencing European digs. Unfortunately, none of those digs are important save to give insight into Neandertal lifestyles. Homo sapiens - anatomically modern Homo sapiens, is still mostly in Africa and perhaps some parts of the Middle East. This is, of course, based upon current dug up evidence, mostly in Morocco. As you can see from the map, still plenty of places to dig up.

Let's be clear here though, skeletons anatomically modern go to back to 230,000 years. That doesn't mean they were us. But there were at least 10 other hominid contemporary (I hesitate to use the term Archaic not having met them), people wandering around as well. People today look nothing like back then. We couldn't because we are a mix of them, now. Going from folklore, you'd guess it was all fairy tale land, JRR Tolkein stuff, Middle Earth with trolls and goblins and elves. And why not? All fucking and fighting my friend. People don't get that they were still and all, people. Hell, for all we know it was Conan the Barbarian back then, with a leather and wood version of sword and sorcery.

Was there a civilization anything like what we call our modern predicament? The answer is probably no. From the previous essay:

The Eeemian shows up in the ice cores mentioned above and there is no evidence of nuclear atmospheric tests, plastics, petroleum or metallurgy. So, no modern things. Corresponding artifacts in stone and bone tell the same story of stone age glory. Homo sapiens is confined to Africa, perhaps some forays, but otherwise, not in Eurasia, and more important, not in the Western Hemisphere.

The Eemian is almost smack dab in the middle of  the Middle Stone Age (300,000-30,000BCE) and the artifacts are flaked stone tools from factory cores, bone tools as well. Around 150,000 years ago there appears a bone tool for sewing. If there is sewing there is tanning, tent making, ropes, salt collecting, a large number of fiber industries, all supplemented by trade networks throughout Africa, and thus social networks, cultural bases and offsets (customs) in some cases universal. ( ex: Shells, drilled, uniform, everywhere far from the source. The same thing happened in the Holocene).

There are faitly accurate climate and terrain descriptions (based on ice and dust and pollen counts taken from drilled lakebed cores). For a few kiloyears in the middle of the interglacial, it is a hotter, mositer world than we experience.The Sahara and Arabian peninsula are green. A Green Hell, if there are hippos in Engand. Mostly savanna but also forests and swampland, with extensive north-south river systems in modern day Libya and Algeria and megalakes in Chad. It was much the same as it was some 5-6000 years ago when the Sahara was last green, but 2-3C warmer. There is today a vast fresh water aquifer underneath much of Libya and Algeria (fortunately untapped), from this green period.

There was a trans-Saharan corridor running from the Atlantic to the Persian Gulf (Green Sahara and Arabia), and corridors leading to Southern Africa. In terms of animals, we know hippos and elephants were lviing in England some 130,000 years ago, so think heat tolerant tropical and subtropical fauna, incredibly rich, diverse and dense in varitety and population. Paradise.

Sea level is 20-30 feet higher than today, notably due to melting of large parts of Greenland and the complete collapse of the West Antrarctic ice sheet. 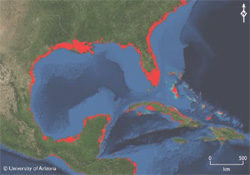 The isthmus, where the Suez canal runs today, was mostly inundated but not impossible to traverse. Migration routes were open to the Saudi peninsula and north along the Mediterranean coast. 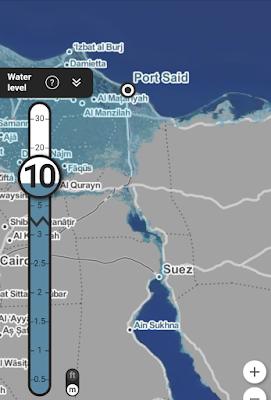 Which means migration into Eurasia was possible both ways, although no Nearnderthal remains are found in Africa, so far. Again the question of if "we" made it to Australia or the Western Hemisphere. So far, no.