When I hear trhe word culture, I reach for my petri dish

I'm a Uranium-6. More later on this. I'm languishing between ideas and finally realized I have wasted an entire year on episodic CGI sculpture when I should have been storyboarding. I should have fed all my art into a GAN or two and let them generate my art to my satisfaction. Hindsight is golden. 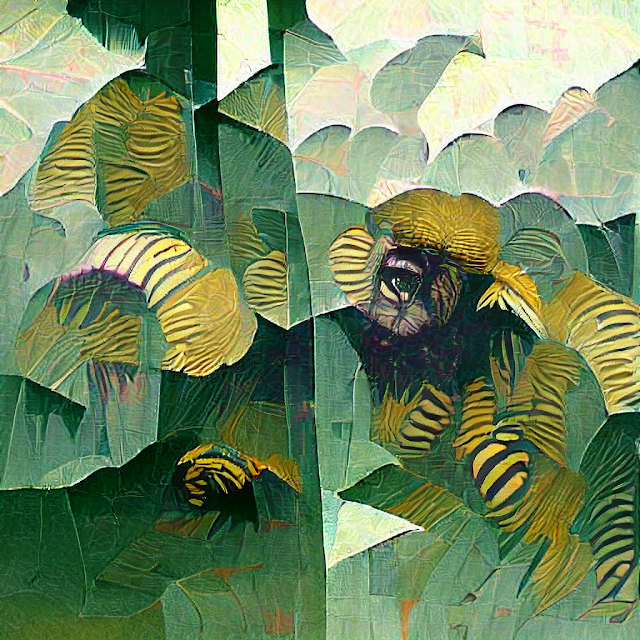 What kind of story? Well, this whole memory hut should have something in it for a story or two. Here's a story not from the hut:

Some years ago there was a couple on my walking route. She was stack-and-that's-a-fact bleached bonde. He was a bodybuilder type. She would be skimpily dress and doing provacative lawncare. He would scowl and brandish his muscles.I figured that was their thrill. Or they were a Venus Flytrap with a basement full of gimps. Or just regular swingers.

I figure the more fearful your imagining, the more rich you are. Rich become fearful for having so much to lose, therfore the more paranoid their scenarios and the miore nefarious the actors. The rich live in fear. The poor live in fierce, or should.

If I were rich, like duh billions rich, here's my plan. What is the most reliable, durable information storage medium on the planet? Protoplasm. 4 billion years tested nanotech. So, I would set up a corporation that would pay people to remember shit, and pay them well. Since most humans have a pretty good memory, most people can do a primary and several secondary expertises or memorizations.

I say this after reading (online) that the Encyclopedia of Human Survival is mostly online. Sorry foks,  but electricity is almost always the first to go. If I got specialists and facilitators, I'm so much beter off than being surrounded by people who look at phones. If you think about it, Steve Jobs laid an egg in all our throats with those evil things.

I would also lobby Congress to pass the Extended Family Act and set up craft guilds to remember shit through the extended families, on the assumption that someone in the extended family will have an interest and the restr of the family can fuck off. The idea is borrowed from Kurt Vonnegut's C minus novel Slapstick. It had the one good idea of the government issue middle name, and the program was titled Lonesome No More! Go try it!

The point is the window is closing on democracy and we need to share the power as much as possible.

As President, I support #landback, giving Federal land back to the Native Americans and let them choose to either stay in the Union as the 51st state or become autonomous. As chaotic as this sounds, it can, through One Weird Trick, be a win/win/win. The Federal lands are worth quintillons, if not sextillions and a few trillion here and there are bedbugs and fleas. So, Bartender, Canfields for Everyone. Reparations across the board. All objections to cost are irrelvant, but prestige? the US of A will always be remembered as the feral child western flank of the British Empire. in a later historical flip, Constantinople to Britain's Rome. But we can get Even Steven. We can Get Back On Track.

The fact of the matter is, folksies, we are at the top of the S-curve plateau, heading south just as surely as a Petri dish of cream cheese germs run out of cream cheese. The Kurman Solution to the Fermi Paradox is in poker called All In, In the case of humanity, we need 14 billion brains, maybe 20 to break the Great Filter and we aint' gonna do it. To make it to Kardasheve One means eating the world.

Speading of eating, Earl Butz, Agriculture Secretary under Nixon and Ford. Kicked out for telling an n-word joke.

Gave us plant hedgerow to hedgerow go big or get out fossile fuel corporate agriculture. Learned the lesson of Famine, probably from Nixon about China. Point being the American people, not being well fed, get cranky pretty quick, and if things so South, in the 2020s we are on our second of third plate of The Rich.

Nixon, no dummy, saw it. You got to keep them well fed. In fact, the fatter, the better. Ad here we are.

It's not sustainable. If my hypothesis of Singularity or Bust is correct, it shouldn't be sustainable. In which case, it's not too late to make civilization cat friendly. And also make monkey cats, which kead toi chimp cats, which klead to Thundercats.