Utopia as a horror show

Thomas More wrote Utopia as a satire, a critique of the political and economic ills of Europe in the early 16th century. It's a satire in the vein of Juvenal and Aristophanes, which, I'm sorry, aren't funny at all. Unless you think bears forced to fight dogs kind of funny is funny. 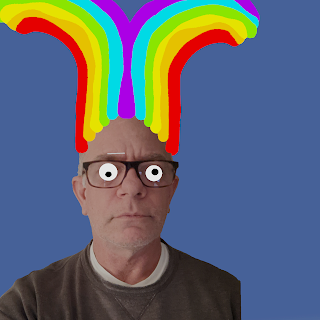 The modern version of utopia would be Star Trek war socialism, elimination of poverty and strife (at least at a local level), which is not the same as More's utopia but fuck him. A great many people in North America, people of a certain strata, check all the boxes for the modern Utopia.

Is it the same feeling of dread that a cow might feel upon entering the slaughterhouse? Could be. We could find all these themes over at TVtropes, with the website itself ironically a link in the Food Chain of Evil.

I watched two horror films that I think nudged me to write this essay. The first, A Girl Walks Home Alone At Night, is your standard vampire fare with a really nice black and white atmosphere to it. It is billed as the first spaghetti western vampire movie in Farsi. It explores a theme of vampires as useful scavengers, eliminating the dross and dreck that would otherwise clog up society. A somewhat similar movie would be Innocent Blood, where the vampire protagonist preys upon criminals until that gig goes south when she accidentally turns a mob boss that starts a vampire crime family.

So, the Girl is your standard modern vampire, has superhuman strength, retractable sharp teeth, can't go out in the sun, etc. Doesn't turn into a bat whihc honestly is stupid. Funny thing is the original vampire of Balkan folklore had no problem being in the sun. That aspect got started in the late 19th century. Also, the folk vampire has no bones or teeth. Weird.

Anyway the mood I picked up is she is knows everything goiing on in her neighborhood, knows who is who and what's what. Perhaps some psychic ability involved to peer into souls. So, she leaves the good people alone and goes for the baddies. Which, given that we are all shits from time to time, would require a certain amount of mercy. I'll get back to this theme of culls in a minute.

The other movie was Train to Busan, a Korean fast zombie plague flick. Again, your standard zombie  movie but with some great action sequences and a little character development. The real villains (naturally) are the business executives who unleash this synthetic biotech toxin, and also a COO train passenger who fucks anyone over to avoid becoming a zombie.Which takes us back to vampires.

Most business executives wish they were vampires, but nah, just don't have what it takes. However, it makes sense that a moral, merciful vampire would prey upon business executives. From a business standpoint it makes no sense as a much larger criminal prey population is available. Still, business executives are crooks and if you do it right, taking them out would make the world a much less angst-sy place.

(As an aside, I never understood the blood sucking thing except as quick means of dispatch. Blood has little nutritive value and I, as a vampire, would prefer sucking on marrow, or just eat the tasty bits of the carcass. Better still, instead of stashing dead bodies like a wolf or a leopard, I'd prefer to keep my meal alive as long as possible. So, maybe I would be a surgeon, or better still a hospital administrator. Which makes me a business executive. How much more of a scumbag would a vampire be as a member of the upper crust, and the answer is quite a lot more of a scumbag).

Okay I lost the thread there. The common theme I get from modern horror, from (as much as I can recollect) Invasion of the Body Snatchers to the Blob and the Borg, is not just fighting monsters, but fighting monsters to avoid becoming the same sort of monsters. Which is, of course, lack of free will.

Werewolves. That would be cool, but again you lose control, you lose your ego, your conscious self (I think) when you go full wolf. So again, pass.

Vampires? Sure. But it could be you lose your soul and will be eternally damned although none of this is certain. In which case, if you lose your soul, you end up being a howling cognitive void encased in skin, which gets us back to the boneless vampire of Balkan folklore, or the eventual all-powerful AI that people worry about. (Needlessly, I think worry about. You don't get from the banal magic of statistical inference to a conscouis being AFAICT).

I myself, through psychedelic experiences and observation, am convinced I have no soul. I am a howling cognitive void encased in a meat brain. Which suggests I can be platformed on a mineral brain. But I cannot use inference to suggest that everyone is like me. There may be others that do have souls. In which case I am morally obligated to treat them accordingly and not be mean or vicious or cynical or cruel or suck their blood and stash their living carcasses in a IV suite in a subbasement or warehouse out in Hicksville. Anyway I think that movie has been done.