People emigrating from Europe to America, I would assume, if they had a choice, would settle in regions most similar to those they left. There were constraints of course: available land, available work, the whims and needs of the bosses. My ancestors, coming in just after the Civil War, were the cheap peoples Europe exported in exchange for cheap food from America.

The area my ancestors settled, Northern Indiana, strikingly resembles the Northern Plains of Germany. More specifically, Northwest Indiana, so I am told, very much resembles the current Federal State of Mecklenberg-Vorpommern, the "Florida of Germany", if you can believe that. My part of Indiana is called The Region, or more colorfully, the Armpit of Indiana due to all the industry.

True, great-great-grand-daddy's country of origin is listed as Prussia (and the joke is when asked of our nationality we say "Prussian-Norwegian, drunk and crazy!"  - or  - "doubly psychotic!"), but we are from Mecklenberg. Lake country. Deep glacial lakes with sandy bottoms, clay-loess sandy soil, thick dark forests, the smell of a large tract of water nearby.

(The lesser coat of arms of Mecklenberg has a bull, but I always thought it a laughing cow with a crown). 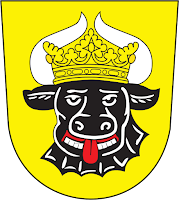 (My mother's side of the family - hill people from Norway, and not so fortunate - ended up half in Chicago and half in Minnesota - lots of Hills in Minnesota - and doubtless had they their preference would have ended up in Vancouver or Seattle).

Not so sure dad's side of the family was actually from Mecklenberg originally. When I hitchhiked Europe at the age of 19, I was pretty much topped-up full of stupid. I did managed to notice that I wanted to spend almost all of my time on the island on the island of Zealand, where Copenhagen is. It felt like home. The Danes, despite owning a peninsula, are really an island folk. And I enjoy island life.

I did not visit Mecklenberg when I was there. It was behind the Iron Curtain in Eastern Germany, and Amsterdam beckoned as a more choice destination.

I've a cold. Coughing, after surgery, especially abdominal surgery, with strains already placed upon the diaphragm, you would think would be agony. Well, yeah, kinda, but actually no.

The fever and general muscle ache is no fun, and last night was the worst, with me waking up to a soaking wet bed. But today, thunderstorms in the morning, I lay about in fresh sheets and dozed. Finally, I got up and said I have to at least try to walk.

(Eating? Not so much fun. Whatever opiates and other drugs they gave me have left a persistent bitter taste in the lower back corners of my jaw. Sugars are out of the question. Salt acceptable, and sour tastes the least objectionable. But I can tell you, like a dog given bowl of brandy, I have absolutely NO desire for intoxicants of any kind. I wish strenuous physical activity. Out of the question for a few weeks according to medical opinion).

So, I went for a walk after the storms. Sun was out, humidity up there, I went past a new city park being converted back to wetlands. Sweat popping on my brow and UV on the skin felt pretty goddamn good. But best off all were the swampland smells. Hard to describe. Again, a sweetness that the lungs appreciate more the nose, but I also detected smell of hod-hewn clay. That was a smell back of earliest childhood, gardening in the backyard, the faint organics of broken up clay, released from when last the glaciers deposited it in its inorganic mineral matrix.

The walk did me good. Feel pretty good now. I'd say the smells helped as much as the walk.
Posted by John Kurman at 4:33 PM