Last week, I took a free class at the public library on 3D printing.

The library has a Makerbot Mini, and the class was using software called Tinkercad, by Autodesk. I've played with Google Sketchup as well. Tinkercad is super easy to use and I skipped ahead several lessons during the class to get to the good stuff. Didn't really make anything I wanted to print off. And, in fact, not really sure at this stage what I would use for, except maybe as an offering for my students.

Obviously, the plastic pieces could be Old Skooled into molds for waxes, with the digital file as the master. It's nice to mix old and new, even nicer to get old stuff to do new stuff.

The librarian teacher said the plastic was actually polylactic acid, which is meltable and burnable. I said I do metal casting at Harper College, give me a piece and I'll cast it in metal and you can show it off in future classes.

He gave me a knight chess piece. So, I invested it in a jewelry flask, burned it out and spin cast in bronze. Nothing at all new there. Shapeways does this all the time.

So, I treated it like lost wax with same burnout schedule. Heat to 400F, hold for two hours, heat to 1350F to burn out carbon, hold for 1 hour, cool to 900F and cast. The librarian told me the piece took two hours to print. I probably could have carved it in an hour. Total time from plastic to metal was 1 day (overnight). 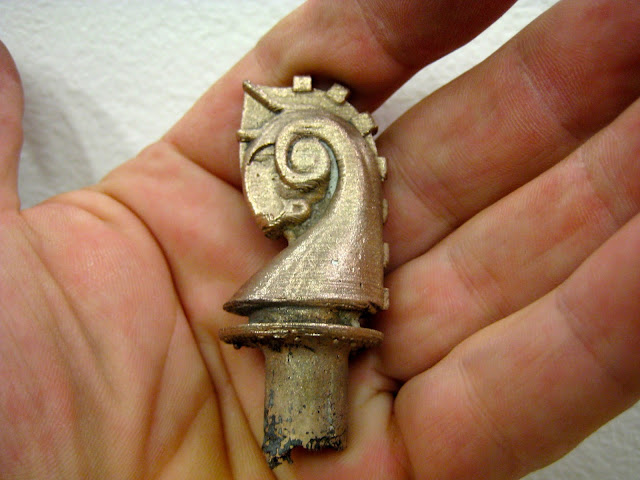 Here is a close-up of the piece. Got a nice laminar look to it. You can see the "granularity" or resolution is about .2 mm. 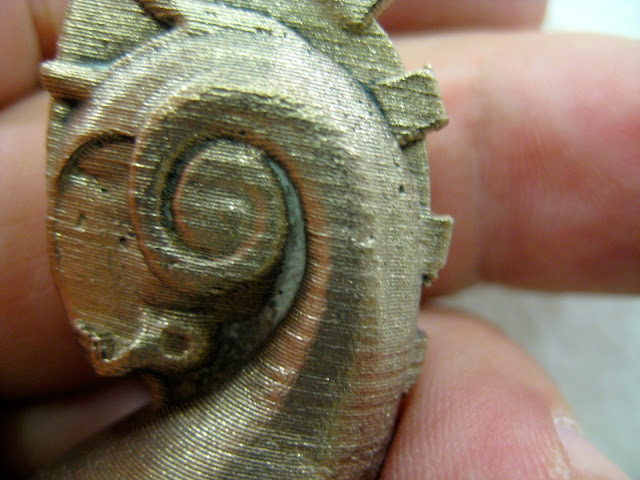 Could have done a better job of spruing so it didn't have defects, but what the hey, it's rapid prototyping. I don't know where this 3D printing stuff will go. Could be a fad. For all we know, they'll get a bioenigneered tank of bacterial slime or coral reef to grow all this Thingiverse stuff just as easily.

But in the meantime, fun!
Posted by John Kurman at 7:20 AM