Fresh out of the kiln. I kept notes. Here's the final shot first: 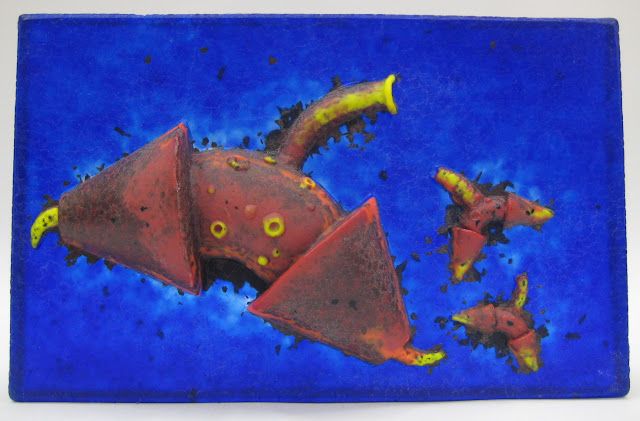 Fresh out of the kiln. I am not entirely displeased with Mutant Gypsy Vacuum Cleaner. The gradation of color is a little ham-handed, and I didn't quite stay within the lines in the transition between figure and background. It is what it is, and I'll not modify my techniques too much. I could cast the mechanicules separately and then embed them in a new casting, but I'm sticking with the plan.

The glass is all from Bullseye Glass Company. Ready? I kept notes.  Background color, which I dig, is a layer of True Blue coarse frit, backed by transparent frit, about 50/50 by volume. Figures were backed with transparent frit to avoid color changes.


Explanation: The investment mix ratios and firing schedule are what work for me. I have consistently had good results with this. The mix is a little dense and soft compared to most, but it is simple and easy to remember, and works for me. The firing schedule (aside from the back end which was for a 3" thick casting using Bullseye annealing schedule, The reason I used the 3" thick schedule, even though the glass was 2" thick maximum was because the thickness was not uniform (background glass in about 3/4" thick). is slow compared to most, but I rarely get cracks in the mold, and so it works for me. This time out, I was very surprised to find a crack. Judging from the flashing, it must have happened on the down ramp after the casting soak. Eh, so what.


I'm going to put it into a frame later, and perhaps put a mirror behind the glass for a partial backlighting.

I've also finished rigging up some more machinerettes for bronze casting in a coffee can mold (same investment material as the glass): 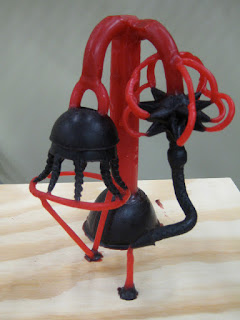 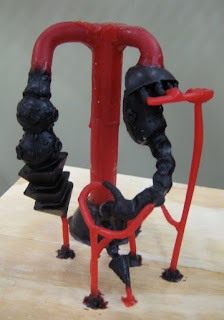 So, the funny thing is, the sense of urgency I've felt about getting all this stuff done by the end of August is now compounded by the fact that I have a little health problem. Turns out that pulled muscle in my lower back was not a pulled muscle, but an obstruction in the ureter of my left kidney. There's a cyst impacting it, which caused the kidney to swell up with urine to the size of a grapefruit or something. And then, Tuesday morning, in some of the worst belly pain I've ever had, to the point of nausea and puking, I drove myself to the emergency room. After an MRI, it was determined that my left kidney had basically exploded and sent a gush of urine into the abdominal cavity, thus causing the belly pain. So, I'm operating on one kidney, and I'm scheduled for outpatient surgery next Tuesday with a urologist. He will probably put a stent in my ureter. Worst case involves removing the kidney, and I will definitely be wanting a second opinion on that shit.

In the meantime, I'm on Vicodin and tylenol and seem to be handling it OK. We'll see. So, I'm trying to get as much shit done as I can before Tuesday morning.
Posted by John Kurman at 8:30 AM