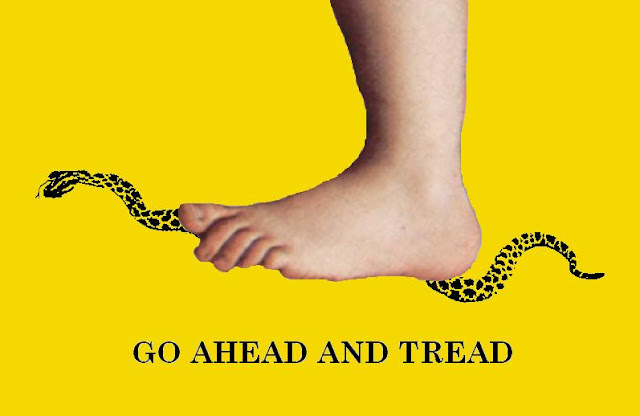 About two years ago, I wrote a short essay called "Is it too late to rehabilitate the Gadsden Flag?" I asked the question, but never answered it. A certain Mister DeVega of We Are Respectable Negroes, asked to expand into a guest blog, which I did, to mixed reviews. In particular, there was some commenter named Deb who basically accused me of white-washing history and being a racist in denial.

This irritated me, as I thought I had said that history was white-washed and I was a racist (as is everyone in America, most especially her included). And so, at the time, I did what Fred Sanford would sometimes do when confronted with a shrill tirade from that wretched old termagant, Aunt Esther, which was to ignore her, turn away and growl to himself.

But the thing is, you don't get irritated unless there's something to get irritated about, which was, yes, I was bothered by the past behavior of my native lands. It's true I and my family, recent arrivals, and duly exploited, had nothing to do with the unpleasantness of the 18th and early 19th centuries, but we were, still, by virtue of being white, indirectly rewarded by past injustices.

I realize what evils our country has committed (some of the most barbarous acts ever, in history), but was hopeful that, when the balance sheet was composed, with all the pros and cons of America tallied, coupled with what seemed to be social progress, that maybe in the future our country might actually live up to the ideals it set for itself.  Ah, but see, that was mere trending, which doesn't mean spit. And nowadays it appears we are going through our delayed version of Soviet Empire collapse, via top-heavy capitalist excess threatening to capsize the whole market economy. (No, really, have you noticed how increasingly cheap and shoddy everything is becoming? Seems like it's only a matter of time before Americans face empty shelves and are waiting in line for toilet paper).

But if you go back and look at the early history of the United States of America, you can't help but notice the places of power were populated by dicks. (And I am going with Louis CK's definition of "dick", e.g slaverholder = dick). Seriously, how could Thomas Jefferson write the Declaration of Independence, and looking out out his window at his field hands, his human property, not realize he was a complete dick? And it turns out old Gadsden, Christopher Gadsden was a dick as well. Not only him, but his whole family and descendants (right on down and past his grandson, buddy of that enormous asshole Andrew Jackson, who facilitated the extinction of southeastern indigenous peoples, and finagled a purchase from Mexico after a trumped up war) were every single one of them a dick.

Okay, so I'm ready to answer the question. Not only can the Gadsden flag not be rehabilitated, it should never have even have been habilitated.

Fuck that yellow snake flag, and the ignorant, amateurish clowns who have lately appropriated it.
Posted by John Kurman at 2:15 PM