A new life awaits you in the Off World Colonies

Let's call this a notes and miscellania entry.

Good news: I managed to get the Bronze Casting class going here at Harper College. A combination of complaints from existing students, and me scraping up the remainder of enrollment from recruits through my mailing list gave me a full enrollment in the class - and only a week delayed. Which means my income level for the semester went from poverty to working poor. Yay!

I'm currently doing very important things in my primary position as studio technician, such as building up missing items from our inventory. Who the heck steals caulk guns, box-cutter knives, and spatulas? We usually lose a set of drill bits, or something similar, but... caulking guns? Weird. Reminds me of the time I bought a meat thermometer for my Bronze Casting class that I used to check the wax pot temperature. It disappeared after two weeks. Who wants a meat thermometer covered in Victory Brown wax?

I am still going through my dry spell of coming up with new work. I think part of it is I am reluctant to make new work as nothing is selling. It's not just me. All the artists I've talked to are having a tough time moving anything. That's not the only reason for the dry spell, but a general discouragement is not conducive to the creative process.

I am nearing my two-year quit smoking anniversary. I seem to getting younger. I saw a picture of myself taken about maybe five years ago, and I looked ten years older than I do now. They are not kidding about how breathing smoke into your lungs will damage your skin. On the minus side, I almost immediately started to develop a belly, and added a good twenty-five pounds of weight. The good thing is, trips to the fitness center at the college, and different total body training regimen taken up this past summer, and (what? the guy who could eat anything?) dieting, have allowed me to go from a pudge-boy 225 pounds to a much more hard-bodied 200 lbs. Oh, there's still some room for improvement, but damn, I look good.

I probably should leave it on that note, that, oh, yes, I do look good. Feeling pretty good, too.

Oh, I almost forgot. Rumor has it (thus the title above) that a sequel to Ridley Scott's Blade Runner is in the works. Given that the original movie took place in 2019 (and as per usual futurists vastly overestimate human progress) and we are not even close to either replicants or star travel, one wonders how they would go about it. 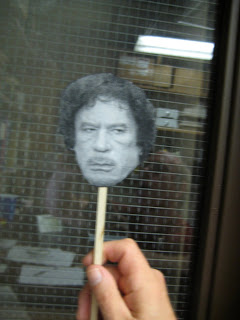 Also, my Gaddafi-On-A-Stick curios are moving well. They're great for peering around corners, or just fooling around muppeting him. I'm considering a whole tin-pot dictators on a stick series.
Posted by John Kurman at 10:51 AM