My Heart Was In It This morning, I woke up with a great topic to write about. It was a worthwhile topic, an ennobling topic, one that got me excited, impassioned, curious, involved, and engaged.

Damn if I can remember what it was now. I think instead I'll write about breaking stuff.

I do like to break the shit out of stuff.  I prefer a manual breaking of stuff as opposed to using machines. I am not averse to artificial means of breaking stuff, like for example, explosives, projectile weapons, or fire. But there's just something about direct brute force, walloping on something with an implement of destruction, that provides a sense of accomplishment no other method provides. There is something about honest, hard physical labor, the complete embodied interaction between mind, muscle, and the shit to be broken, that just cannot be replaced.

I'm reminded of a story from my youth. My father had bought himself a cottage from the Canadian government. It was in an abandoned fishing village called Jackfish, up on the north shore of Lake Superior. We ended up staying there two summers, under the most primitive 19th century living conditions. No electricity, no running water, an outhouse, a wood stove in the house. My chores were to carry buckets of drinking and washing water up from the lake, and occasionally chop wood. We built roaring bonfires down by the beach at night, sang songs, looked at the stars, wandered the hills, avoided bears, spooked moose, caught giant fish. It was probably the best two summers of my childhood.

One day my brothers and I found a literal Viking horde of stashed weapons down in a fishing shed. They weren't weapons, just tools for cutting and hauling wood and stone, but to us they were superdestroyers, which is what we called them. Axes and adzes, long thick steel poles, things that looked like pikes (probably for the fishing boats) and giant mallets and sledge hammers. We were ecstatic, overjoyed, out of our fucking little minds with glee. Had we been allowed to, we would have laid waste to the entire village. Our father would not let us. He selected a particularly dilapidated old house, and let us loose on it. It was wonderful. 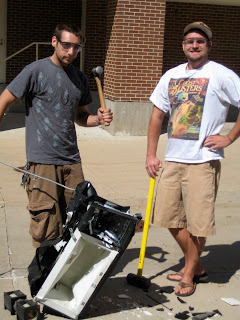 And apparently I'm not the only one who feels this way. It being early in the semester, I've no work for my idiot student aides. We did have an abandoned piece of equipment that was going to be shoved into the dumpster. I gave them permission to beat the shit out of it before they threw it away. Aren't they happy?
Posted by John Kurman at 4:18 PM