Sir Francis Drake once calculated how many habitable worlds there are that could contact us, and came up with an answer of "between at least one and at most infinite". Glad he narrowed that down for everybody.

Actually, no. Sir Francis Drake didn't do any of that. A guy named Frank Drake came up with an equation back in 1961. And it goes something like this:

Yes, you can tell right away that this is a silly equation. There are a lot of unjustified assumptions involved. Like, do you really need a planet to evolve life? Is "life" that a planet can support necessarily our kind of life?  Life that requires liquid water, carbon, oxygen, nitrogen, hydrogen? Why not life evolved in interstellar space, that likes hard radiation and zero gravity, and extreme cold? Why water babies snuggled up to yellow suns? Why DNA? Or even carbon-based? You get the idea.

In other words, this equation is biased towards our kind of life, the only one we know. And though not particularly realistic when you look at what an extremely inhospitable - even downright hostile - universe we live in, at least we are looking for some kind of life that we could actually communicate with, in other words, life that is like us.

Well, and then none of the above terms have a very accurate number attached to them. So the equation is quite silly. And yet - And yet - Ever since astronomers started looking, with super powerful telescopes and satellites, they are discovering planets around stars pretty much everywhere they look. Granted, not the kind of planets you would want to live on (the easiest ones to detect are massive Jupiter sized planets that orbit uncomfortably close to their stars), but it does much to bump up the number in that second term of the equation.

And nowadays, they are starting to find planets that are more like ours. Granted, again, a lot of these planets are pretty darn massive and orbit close to the stars. Some are called "Super-earths", meaning they are much more massive than our lovely little planet, but are more likely rocky rather than gassy. 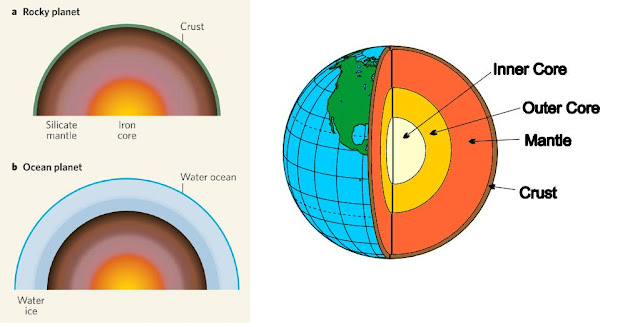 For category purposes, the masses of these big rocky planets range from 1 MEA (1 earth mass) to up to 10 MEA. Although technically, when you get a planet ten times as big as ours, it really is more like an ice giant, like Neptune or Uranus.  Yes, even close to the sun, it would be an ice giant. Reason is there is more than one kind of ice. Put water under enough pressure, and it forms and ice called Ice X, which is solid ice, but at temperatures hundreds, even thousands, of degrees above our "freezing point". A planet with a lot of water may have world-drowning oceans hundreds of miles deep, and that is enough pressure for ice to form.

Of course, there are a lot of factors to get life on our world. There's the "Goldilocks" factor - being in the right orbit for liquid water to exist on the surface. As it turns out, the Earth is just outside the Goldilocks zone. Why don't we freeze solid? Well, we did, about 700 millions years ago, during the Snowball Earth period. What matters is what your atmosphere is composed of. For the longest time, there was a lot of CO2 in our atmosphere, which kept things freezing, but oxygen-pooping algae and bacteria ate it all up, and things froze solid.

It's not only the right-sized orbit, it's also maybe about having a moon, and a big Jupiter midway out in the solar system to clear out bombarding asteroids and comets. And having a world made out of the right kind of stuff.

Under different conditions, with different concentrations of chemicals in the cloud that the solar system formed out of, this planet of ours could have ended up as an iron world, like Mercury, with little or no rocky mantle, and probably no water. For that matter, we could have ended up as a carbon world like Saturn's moon Titan, with a diamond core, and hydrocarbon seas of gasoline and a methane atmosphere. Or a water world. Or a carbon-monoxide world.

The point is, it takes a lot of IFs (the factors in the Drake equation) to get to our particular world even before you get to populate it with life. And once you are there, there is a good chance that IF life evolves it may be carbon-based, water-nurtured, eventually oxygen-breathing, multicellular life like ours, but life like us? Exactly like us?

Ooh-ah. Those are some really high odds. Astronomical.
Posted by John Kurman at 9:32 AM