Can Del Close Save META?

In 1973 I went on a high school field trip to Second City, the sketch comedy club in Chicago. I got to watch - without knowing it - John Candy and Bill Murray on stage. I also remember this weird guy with glasses at one of the tables, chain smoking and laughing loudly. He often distracted the audience enough to fluster the players. Only later did I realize he was Del Close.
Del Close helped figure out long form improvisation, and it is my opinion that art form will be the only savior of META and the VR universe. 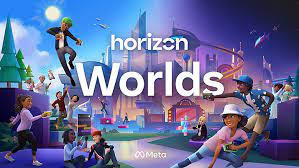 Let me unpack that. VR has been around forever, but only lately have the 1980s fictions like Ready Player One become closer to reality. MPORG games have been around forever and it was assumed that VR would just be 3D glasses. But get past the avatars and the goofy chaos of youtube hooligans, and people have been social on it. Not mass event social but small theater social.
What is not realized is there are things that must be shared events, public events, and VR doesn't do it. Not when you can do it IRL. Dinner theater and one ring circus would seem to be VR outlets. But nothing unstructured and liberating. Instead the artficial joy of pixels and voxels and a Disney Ride. The only improvement to VR action will be hamster balls*, but creative play? Not on Zuck's lawn.
Enter improv. Del Close, paraphrased, said "conflict is boring. I'd rather say 'Yes, and' instead of  'No".
Del Close came up with a generative method of long form improv called The Harold. The Harold was later improved to produce long form experiences of 10-45 minutes. The successful performance (allowing participants more time to develop believable characters and storylines) involved initial suggestions, followed by vignettes, followed by a group game using the vignettes, iterate until it goes bust or something magical happens. Good participants witness a logical structure develop from a premise, a set of equations today now known as Chaos Theory or nonlinear models.
Long form improv has advanced beyond actor warmups and parlor games, but what's wong with those? Aa parlor game can be either premise-based or organic play, can be expanded into a community, a consensual reality, and then you get the gestalt effect. If you've ever played in a garage band and improvised, you get the idea. Out of all that awful dirt appear nuggets of gold. You use those nuggets to make less dirt and more nuggets, before you know it you have a world built and a personal mythology to follow. And you will note that those instances or trances occur when the band was the Band, hive mind achieved.
How does this work for VR experiences? People improvise anyway, right? Anyone who has watched Youtube videos of VRChat understand too much improvisation is annoying, not at all freeing or creative as a social place to go. My suggestion is the people don't follow The Harold, the bots do.
Consider: the internet is increasingly being writen by bots. Probably 99% of internet content will be AI-generated. Online worlds and all the stuff that inhabits them, with humans in a tiny minority. How will it be fun and useful for us humans? My answer, hard-wire the spirit of fun and play into the bots. How do you have fun? You feel safe. How are you able to play? It's safe to play. The Yes-And logic of The Harold, that conflict is boring, could possibly make META safe and interesting. Although honestly, VR, like block chain, is a solution looking for a problem.
Other things. I got done with my radation treatment. The proton beam really anatoginized the tumor, however, I am noticing an improvment in vision as the inflammation subsides. 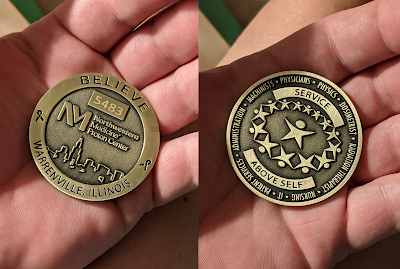 I got a ceremony at the end of treatment. I rang a bell and got a challenge coin. I don't consider my role in this as military veteran, as the rituals and tone would suggest, still I acted the part. I am honored by the network of care.
I thought about being an actor, still could. The limiting factor in my case is probably talent. Too inappropriate reactions because duh autistic dork flinch.
Posted by John Kurman at 7:04 PM