I don't think there is a good symbol for recursive substitution. Oh, true, there is a protocol for recurrent sequence, like the Fibonacci sequence, for example, can be represented as

But there is no simple singular symbol like plus or minus or equals is: + - =. I'm not sure if that matters, but it kind of bugs me.

I was thinking how history does not repeat itself, and does not rhyme. But it is occasionally almost self-similar, or as some people would say, fractal, when inherent conditions are similar and external conditions are also similar. I noticed this looking at pictures of headhunters in Burma, the Naga tribe, and how, living in similar conditions to the Yanomami, they look the same. Same tech, same lifestyle, even the same hair styles. Despite the fact that they separated by a gulf of 10,000 miles and 10,000 years.

So, you might say a similar little black box under the same conditions within a bigger black box produces - perhaps only superficial - similarities in both. And if this is true in space, why not in time as well.

And thus people say cute dumb things like "history doesn't repeat itself, but it does rhyme".

It is also why people go fractal crazy when in fact fractals do not even begin to explain not half of what we see out in reality. They just do a slightly better job than regular old geometry.

Take, for example the Mandelbrot set which so many swoon over. Infinite zoom, one person told me. But if you look at the images, after awhile they are so blandly similar and, well, kind of boring, been there done that a few orders of magnitude ago. 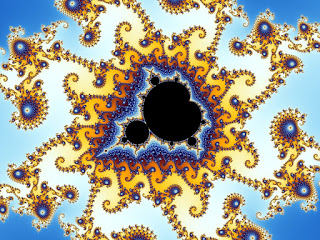 And what, after all, are you looking at? Well, it's recurrent sequence of a complex number Z plus some constant C such that Z = Z squared plus C, then substitute the new Z into the old Z and square and add C again, and so on.

Now if you do that, you find that the function goes to infinity, and every value ultimately going to infinity ends up, color wise, as all white, like a blank page. But, if you look at the gradient, or how fast it tends towards infinity, and arbitrarily assign a color to the gradient, you end up with the classic picture of the Mandelbrot set.

Okay, so what? Point being I guess that self-similarity ain't all it's cracked up to be, but still, you use what you got. As that creepy old incompetent psychopath Donald Rumsfeld said, shrugging off the severed limbs and shredded viscera of poorly armored American servicemen, you go to war with what you got.

Anyway, the self-similarity tool I used last night to compare historical processes, and it went like this:

I'm reading an account of Eli Whitney. Yes, of the cotton gin (and the inadvertent propagator of slavery and genocide, by making green cotton that grows well in Mississippi and Alabama profitable). Eli Whitney managed to finagle a contract with the federal government to produce 10,000 stand of arms (rifle and bayonet) at $13.40 a pop.

Keep in mind, in the 1790s, America had a gun problem. There weren't enough guns.

So, at the time the craft industry just could not meet the demand of government. Whitney proposed to use "machinery moved by water" and to form "tools so that tools themselves shall fashion the work".

Whitney was kind of successful, in a wink and a nod kind of way, when in 1801 he demonstrated to President John Adams that random selected parts could be assembled into a rifle. (The parts had been pre-selected and fitted and finessed by craftsmen to actually work). Thus, the not entirely new idea of standardized parts was made manifest.

But what struck me was the account, a year prior to the White House demo, of how a government inspector arrived at Whitney's factory completely appalled to find that Whitney had a not produced a single rifle, but was instead making machines.

We are not creating artificially intelligent programs. We are creating programs to create programs. AI is simply an item that is a result, and not a goal. And if the endeavor is successful, it will be as easy, and inadvertently easy, to create 10,000 AIs as it is to create one.

I wonder what they'll create?
Posted by John Kurman at 12:16 PM