A piece in the Washington Post notes that the current climate conditions have not been seen for 66 million years. Back then, it was the Paleocene-Eocene Thermal Maximum, the last time conditions were similar to today. They note, however, that this situation actually has no historical analogue, as the rate of the amount of CO2 being pumped into the atmosphere is unprecedented within the geological record. What we are doing is entirely new and novel.

As if that wasn't bad enough, James Hansen's new study suggests we are moving from the acceleration phase into the shock phase. There are, of course, no good predictions as to where it will go, but again, we are entering into entirely new territory.

This is similar to predictions that the coming presidential election will look like Nixon/McGovern, or Carter/Ford. There is no reason to think this should be. After all, none of the conditions from then apply to now.

That whole "history doesn't repeat itself, but it does rhyme" quote has been attributed to Mark Twain.

Twain never said that. If he had, he wouldn't have said it that way, as it reflects late 20th-/early 21st century English usage patterns, which is to say English not beyond a grade school vocabulary. We've devolved to that point, I suppose. It's probably because Americans don't read books any more. Americans don't do much any more, actually, except die by the gun, the drug, and the fast car.

But I did something. I thought I was going to work for Newman today, but he is waiting on supplies to be delivered. So, I was able to go into the college, sandblast the crappy surface job I did yesterday, and reapply the patina and seal it with a fresh can of Krylon matte transparent sealer. Ah, that's better.

Here you go, the full tableau. I guess I'm calling it "While You Were Out". 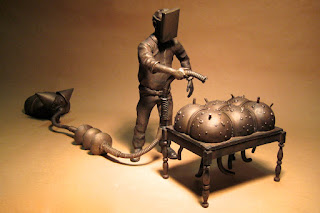 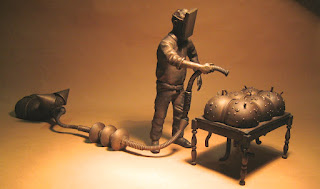 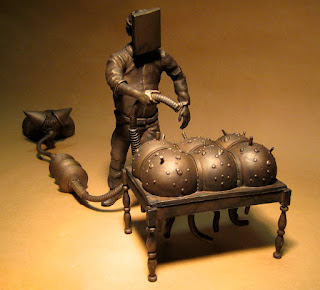 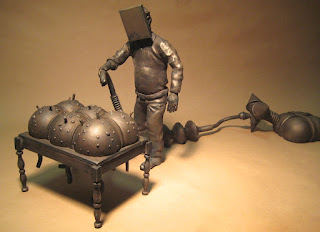 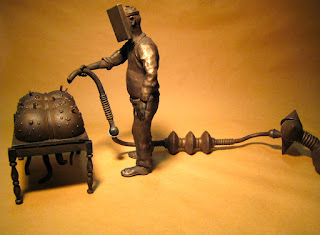 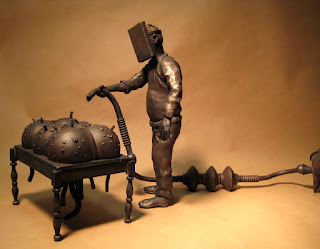 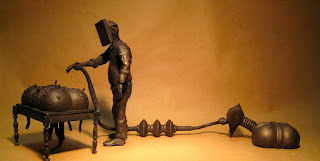