I'd like to take credit for the term "mechanicules", but earliest known credit, I suppose, goes to Michael Kandel, the English translator of Stanislaw Lem's The Cyberiad.

I now have nine mechanicules (originally called 'mechanical bacteria", but the problem is a mechanicule can range from milli- to micrometer size, and, although bacteria also inhabit that size range, they are typically quite small, on average about two microns) ready for casting. The waxes have been rigged, and, as you can see here, already been dipped once in ceramic slurry for the first surface coat. 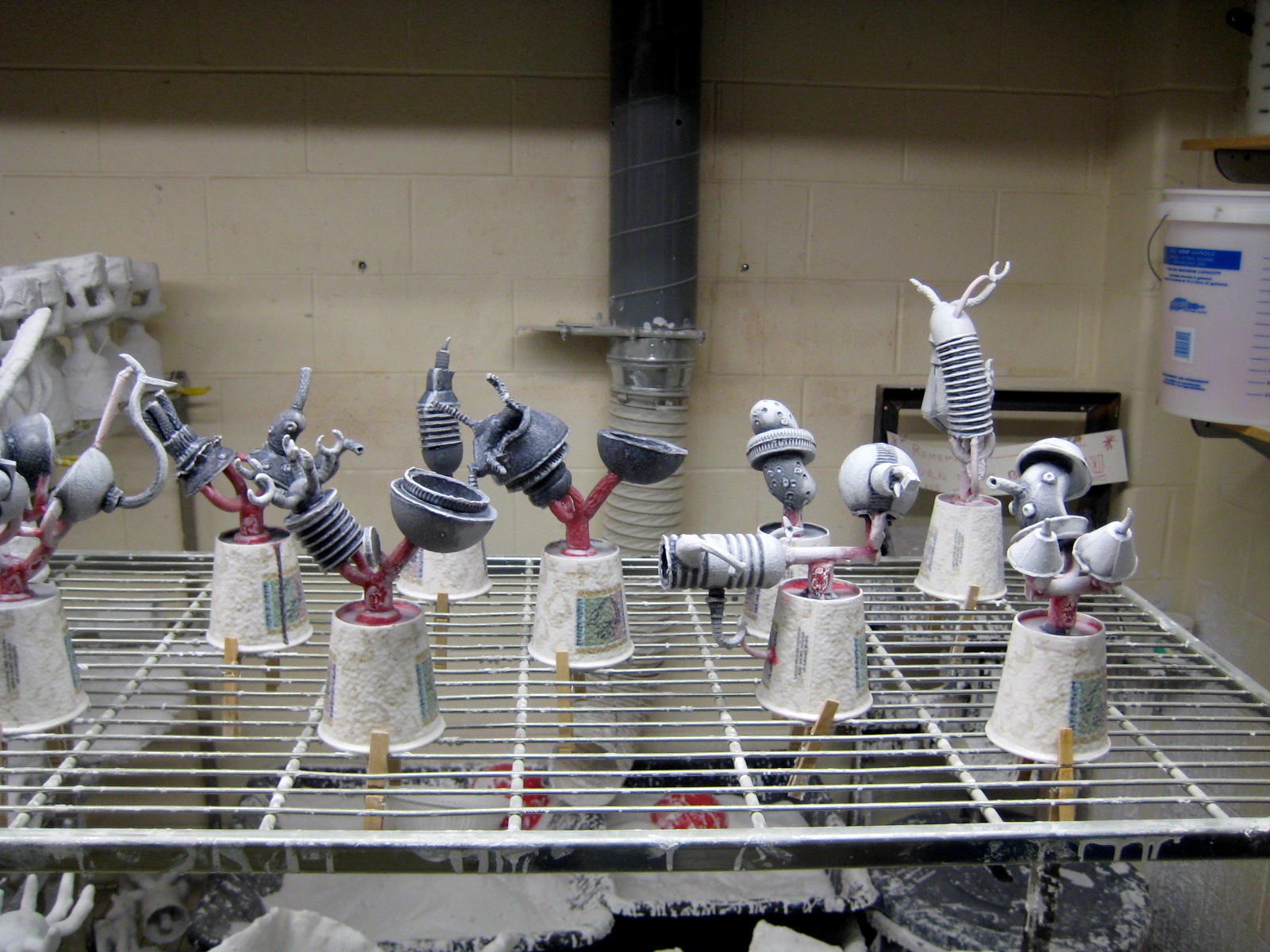 Rigging is kind of a science. A surprisingly Neolithic science. You have to be aware of how not only how the molten metal will flow in, and how the metal will cool down, but also how the wax will melt out, and how the sprue and runners and vents should be positioned to effectively introduce metal and remove air, and also what surfaces can't be adequately cold worked later on, and which arrangement of what will lead to the minimum amount of defects (and note I said minimum, not absence). I'm sure, in the Star Trek future, you'll just dial up the form you want and it will pop out of the replicator, but until then, it's all proven 7,000-year-old technology. 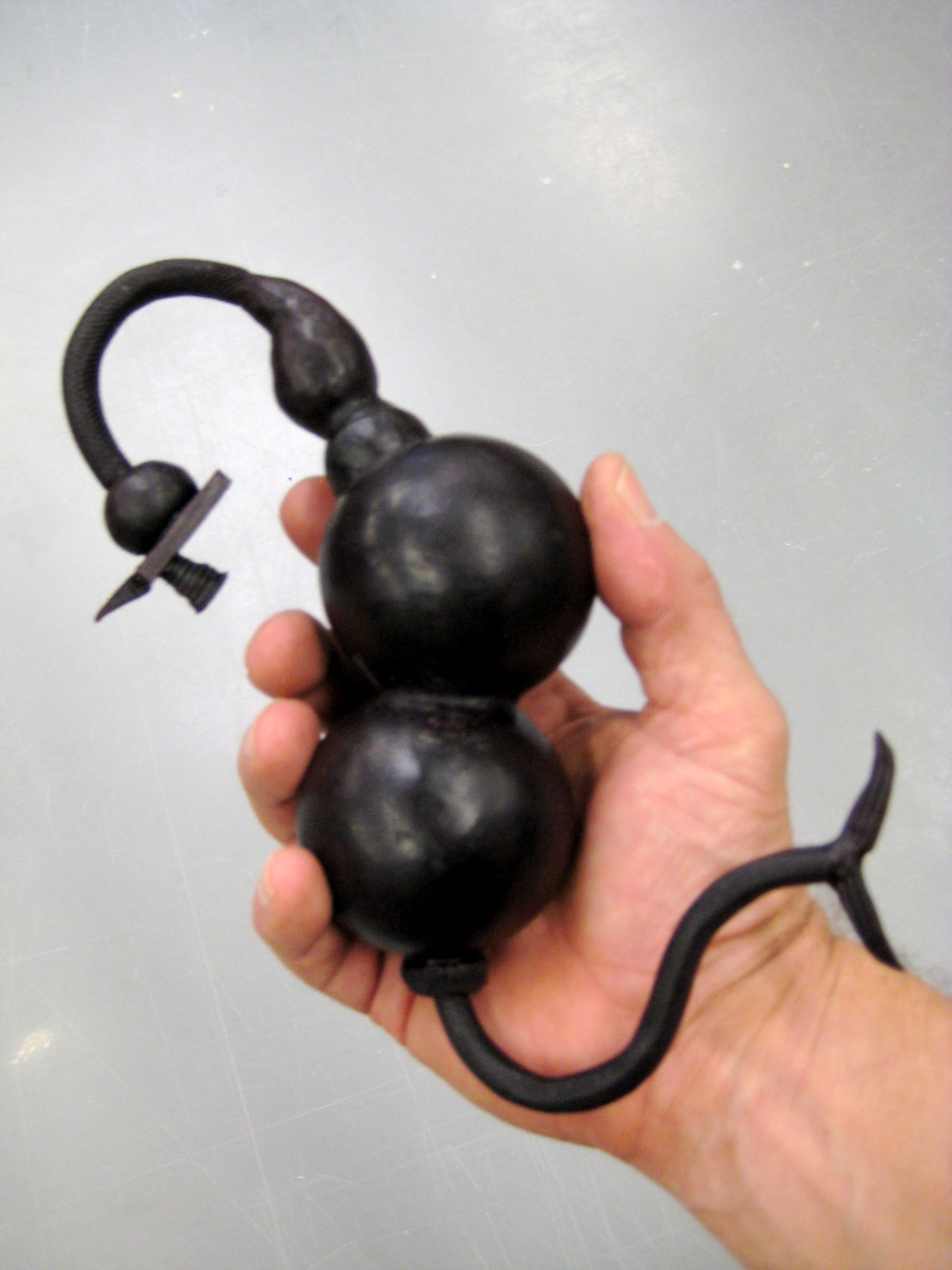 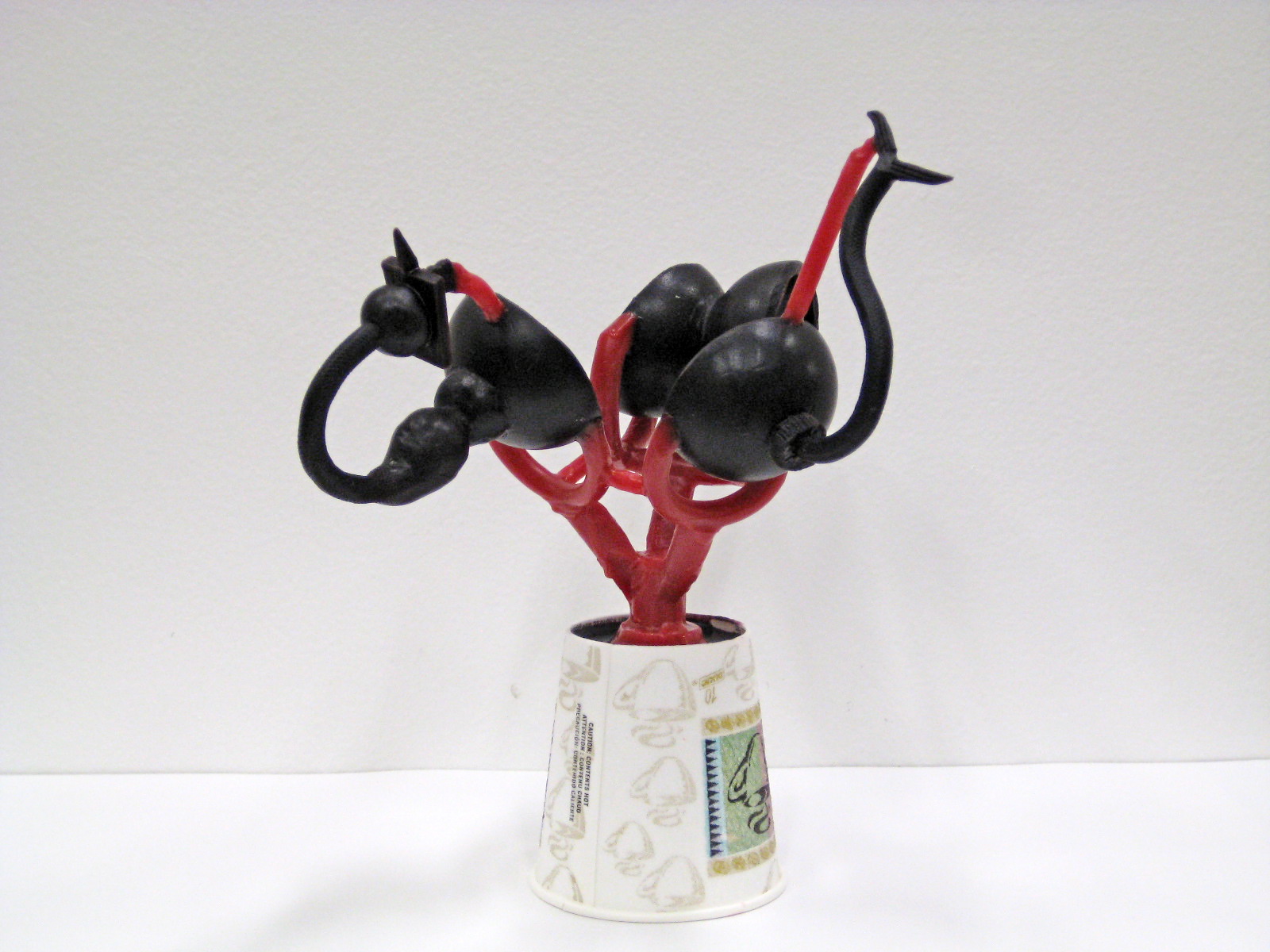 Here's the last one in the series, a rather Geiger-esque penile chestburster type of critter: 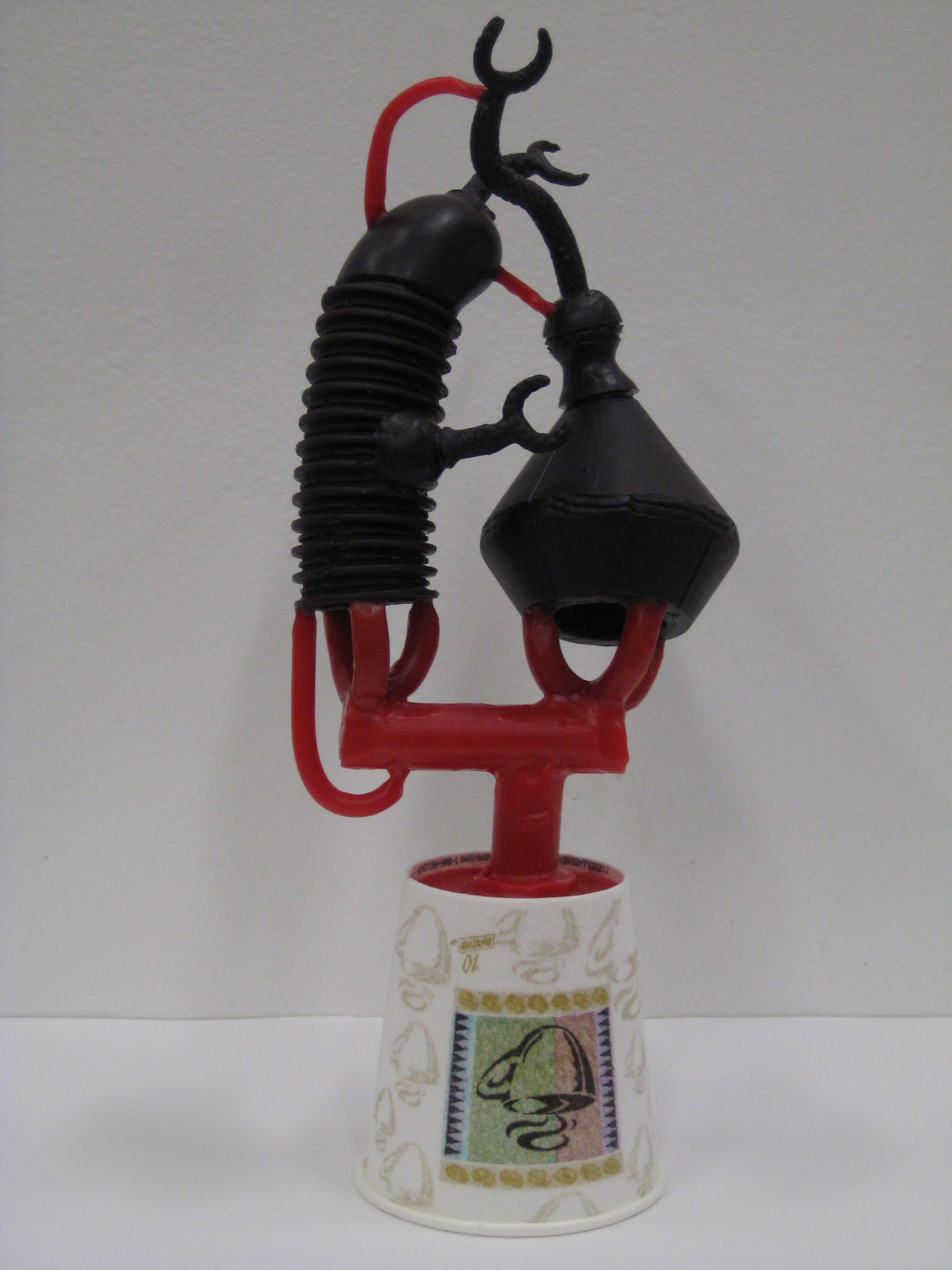 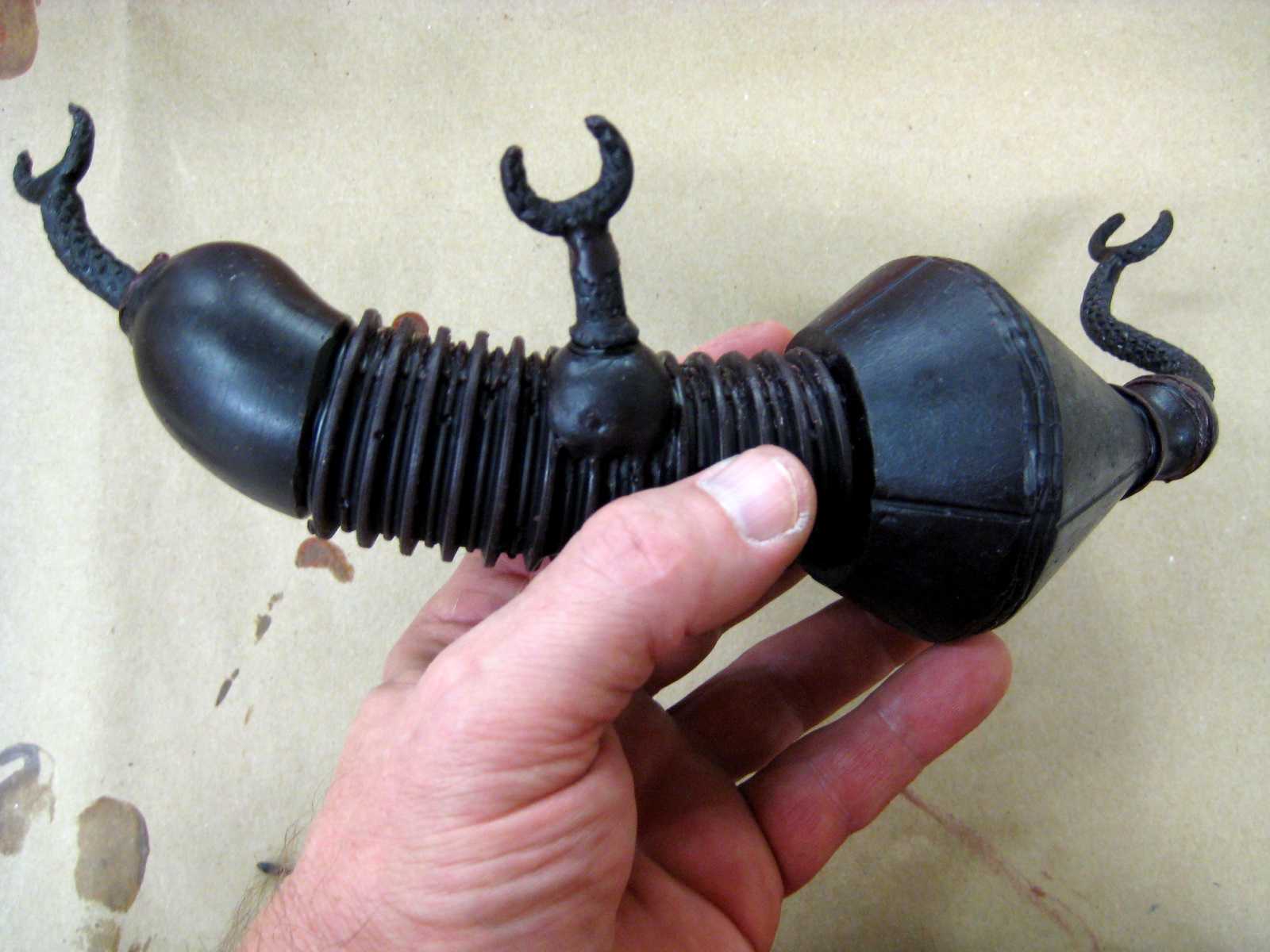 I actually kind of imagine this critter to be able to grasp and hold a human hair (approx 100 micrometers in thickness) in one of its little claws, which means that, "life-size" this particular mechanicule would be about 2 millimeters stem to stern. I've seen really teeny tiny ants about that large.

What would it do? I don't know, maybe a couple trillion of them crawling over your scalp, with a little SQUID magnetometer and voltmeters packed inside of, might be able to read your brain. Or keep your hair cut. Or both. Or something.

My personal mythology about all this is that the mechanicules are all part of the techniome, or microtechiome, or microtechnobiome (if you go with the idea that they are classified as a biological phenotype, which I guess they are). But I prefer microtechniome, in that it keeps the confusion to a minimum, and the maximum amount of fairly clueless and non-tech-savvy people I've sampled seem to get it.

And the idea can be found in the Empire of Texas arc of  the Convergence tales, in a visitation from the incredibly dangerous mechanical being, Edward Hopper, to my adopted home planet of Alterra, when he brought his very large array of little support servo environment of tiny little robots that infests his super advanced technological body. (Which, BTW, if you haven't figured it out, was neutralized by a Teuthid Plague that infested every human and made them immune to Texan Technological Zombification. And if all of the prior isn't a sign that I'm in the middle stages of schizophrenia, I really don't know what I else I can do for you).

In any case, because Kohler refused my proposal to pursue further investigations into the Texan techniome, I believe I'll give up the usual bullshit art submission con games, and write up some kind of  proposal to Kickstarter to make more of this shit in glass, bronze, and aluminum.

I be working on that presently.
Posted by John Kurman at 1:40 PM