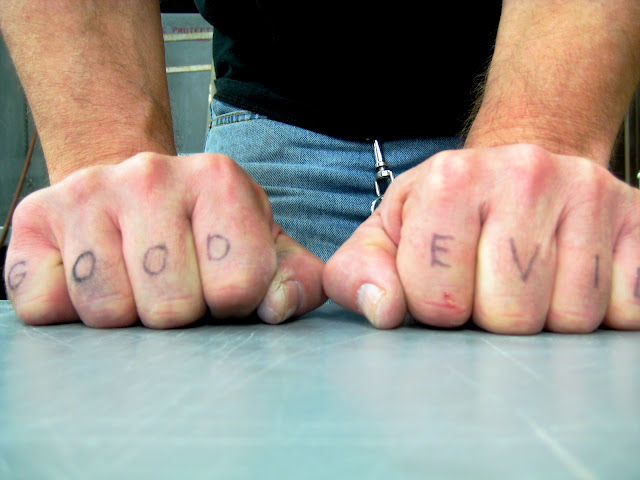 There is a man at the college that is the size of a one-year-old baby. He rides on a scooter, but still needs assistance. I know he is a man who is the size of baby, because he needs a shave - probably purposefully so.

This type of shit, along with Lesch-Nyhan Syndrome, makes me think that those who believe in loving, personal God have their work cut out for them. They will say that this, all this, all this cruelty in the world is part of God's Divine Plan. That somehow, gifting people with abnormalities, or granting people indignities such as hemorrhoids, or zits, or any of the hundreds of other bodily indignities we spiritual beings trapped in the physical  must endure, God insures that his inscrutable machinations shall all eventually come to pass.

And, given that the Almighty is all-knowing, and not just knowing what has, is, and shall come to pass, but all the plenitudinous multiplicities of never was, cannot be, and shall not, it makes the planning a tad even more ridiculous looking to us limited humans. Even more so if you consider that the whole point of the plan, at least as the tale was told to me, is to triumph over evil. Evil - still another divine creation.

At least, if you go with the Judeo-Christian interpretation of reality, that seems to be the plan. That makes the whole point of existence all the more silly, for Lucifer, Satan, Mephistopheles, being the loving creation of an all-knowing and all-powerful deity is just a puppet playing out a pre-programmed role. Not even worthy of a Greek tragedy, then, just a sad little corner masturbation of a yarn. Which makes, well, me at least, wish that the contest was a bit more on a level playing field. Something more in the philosophy of Manes of Persia, the prophet who envisioned Manicheanism, a vision where the world is a fusion of equal but opposite forces of good and evil.

Perhaps, with the proper rationalizations, this more dramatic, or less melodramatic, vision of existence can be folded into Christianity like chocolate chips into cookie dough.

After all, the popular myth goes that Lucifer was the first and best of the angelic host, beloved of God until the rebellion. Various accounts exist as to why Lucifer rebelled, was cast out of heaven and took the name of Satan, but my guess would be that the best way to turn a son against a father is for the father to abandon him. That is the major cause of more than one unruly son's bad behavior: a theme that can be summarized with the question of: Where's Dad?

Perhaps Lucifer, abused by neglect, started to hang with the wrong crowd. He started getting involved in scrapes with the law, hanging out with unsavory characters, engaging in underage drinking, selling bags of weed and speed and acid, and sampling the product. Hanging out in punker clubs and vandalizing local retail establishments. Spending a few years in juvenile correctional facilities, coming out angrier and stronger, and, what with the street fighting and skateboarding, and lifting weights and doing pushups, becoming buff and hard and tough and ready - ready to take on the world.

And so he goes out, and finds the Old Man, and confronts him. And the Old Man, he may be only slightly older than Lucifer, but he's old enough. And here's this tough, young punk, lightning-fast and wiry, and beatifically nimble-footed, up against a guy who's a lot bigger, but also a lot slower, and paunchy and elephant stumpy on his feet. But the Old Man, he's got the old man strength, all those fast twitch muscle fibers gone by the wayside, but replaced with inexorably horrific, glacially powerful slow-twitch muscles. And the Old Man, he may not have the stamina, but he's got the endurance. He's inured to agony from so many chronic aches and the pain of everyday aging. Doesn't matter if the kid lands claw hammer blows to the belly, it's like pummeling hard clay. And forget about face punches, smacking that jaw, why, the kid might as well be hitting be the blade of a bulldozer. So that's not gonna do it. His one option is to wear the Old Man down by getting him to move, getting him to dance, and so he keeps just in range, just within the circle of punishment, but dodge, and feint, and meet those sledgehammer blows so that they glance and slide off the hard edges of his body, using the soft motions to turn the hard forces into wasted energy.

But the Old Man, he's seen all this before, and then some. He knows the both the kid's moves and more important the moves kid doesn't have. Even so, it's a prolonged and bloody fight, and after a while He realizes He relishes the thumping He's receiving. He takes pleasure in the pain of a particularly amped up kick or strike. He feels a paternal pride that he couldn't feel any other way. It's a maker's pride in this magnificent creature that wishes to destroy Him, seasoned with a delicious primal fear. This beautiful, wild thing that is battering Him, trying to break Him. It may be the most touching moment of Creation He's ever experienced. But like all things, it has to end, and so He summons an All-powerful, a sacrilegiously Unholy, blow and knocks the kid senseless, bright sweat and black blood and perfect teeth spattering and showering all over the good earth. Down, down into smoking hole of fire and brimstone.