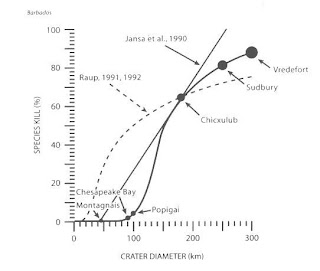 ... if by 99% you mean percentage of species now extinct, and you add the qualifier 'eventually'.

There are days when I think, "You know what? We're fucked. We are just circling the drain". This is one of those days, and not for any particular circumstance or feeling or mood, but more on just a specific influx of information.

Now, does this mean I give up? No way. I think that whatever hope that died years ago with the realization that we have probably trashed the planet past the point where it will support us in the manner we (we being Americans, of course) are accustomed to, that hope has been replaced with a stubborn cussedness. I just heave a big old sigh and just wait to see how bad bad can get.

And when I say "trashed the planet", this is not to say we've trashed the planet. Far from it. Planet's a mean old monster, shake us off like a bad case of fleas (as George Carlin once said). Or, more if you prefer your Will Durant: "Civilization exists by geologic consent, subject to change without notice".

And when I say "trashed the planet", this is not to say we as a species are threatened with extinction. Far from it. We are an opportunistic omnivorous generalist species. Things will have to get really, really bad to wipe us all out.

When I say "trashed the planet", this is to say that we have just completely fucking trashed our rental apartment, punched holes in walls, allowed bathtubs to overflow, strewn empties in corners, smeared feces in rugs, pissed on the couch during naps, set carpets ablaze, and, in short, and we won't receiving any of our deposit back.

So what put me into such a wonderful mood? For starters, it might be this quote, from Richard Ellis, author of Hive Mind:


People believe in their hearts that a piece of raw fish is worth $600 a plate. And one of the main reasons it's worth $600 is because you can afford it and I can't, but they can. That makes it very special, and it makes the people who eat it special. Any kind of luxury goods largely come from that sort of statement: I can afford it, and you can't. I'll drive a Maserati, even if I can't drive it faster than 65 miles per hour in most of the United States. I can afford a $280,000 car, and you're stuck with a Dodge Neon. I can fly a private jet, drive a Maserati, do anything I bloody well please, including having a $600 piece of fish. And you can't. And this is the brutal truth: bluefin, which beyond their intrinsic value as living creatures happen to be one of the universe's more majestic species, a Platonic ideal of oceanic speed and grace, aren't being extinguished by greed. They're being sacrificed to our vanity, pretension, and ostentation - most pathetic of  our vices.

Ellis is talking about the bluefin tuna, overfished to the brink of extinction. Given that it is a much prized delicacy, the sensible thing to do would be to quit fucking fishing it and give the population a chance to recover, but instead its rarity puts into even greater demand.

We are told (although there is some debate going on) that Comet Chicxulub wiped out the dinosaurs. Comet Chicxulub is estimated to have had the explosive power of a hundred trillion tons of TNT.

There are larger impact craters. The Sudbury crater in Canada is twice as big, and impact that created the Vredefort Crater in South Africa - the largest verified impact crater - is estimated to have been ten times Chicxulub.

Sudbury and Vredefort both occurred some two billion years ago, back when nothing much was happening here anyway. It was "just" microbes back then, and nothing much happened to them.

(Actually, more and more evidence is being compiled that these impact events really didn't do much in the way of hurting the planet. One wonders exactly how much of an effect the rather pathetic mere gigatons of the world's combined nuclear arsenals would have. And the answer is, we'd get our hair mussed, but the hysterics of all life wiped out is a bit much).

So what do you need to get a really good extinction event going? Well, not counting the disappearance of Ice Age megafauna to hunter/gatherers (and to be fair, you can't rule out climate change as a factor), you have to go with agriculturalists. The last ten thousand years have seen an increasingly rapid extinction rate that is unparalleled in the fossil record. Yes, even the Permian-Triassic extinction event, the Mother of all Extinction Events is getting a run for it's money.

And it's all due to, global nuclear war? Supervolcanoes? Hyper greenhouse event from giant burps of methane ice? Comet strike? Nope, little old us. With our land clearing, our pets, our vermin, our diseases, our pests.

Is it too late? There are days when I think, nope, we got maybe a decent chance. Maybe, if we can pull our heads out of asses, we can turn things around.

BUT, they are very specific heads pulled out of very specific asses that are needed, and this may require massive surgical intervention.

Then there are days, like today, when I think, nope, the turning point was August 14th, 1975. That was the perigee of our existence, and everything after that is a let down.

I could be wrong. Check back with me tomorrow. Because there is that stupid intense little gamma ray burst of cheerfulness stubbornly wedged in the center of my soul, even on days like this.
Posted by John Kurman at 5:03 PM