You may recall an essay (here) about making wax hands and playing around with the waxes. I finally, some six months later, finally, finally made some art with them. Here's the result, entitled "Gun Stupid": 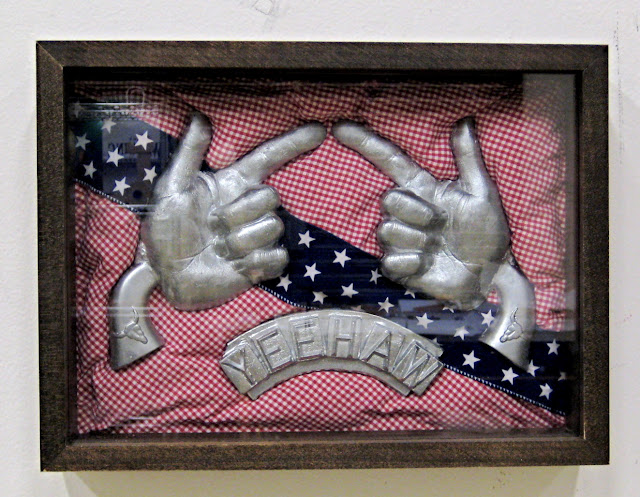 It's a wall hanging about 15" x 11" x 3" and it is all right angles and properly squared, it's just that the camera angle was a bit askew to cut down on the glare from the glass. The material is gingham I guess, and the starry ribbon I got from the 4th of July clearance display at Hobby Lobby. It obviously is meant to be an ironic celebration of America's gun culture. I had considered a subtitle of: "As long as you ignore everything before the comma, the 2nd Amendment is crystal clear".


I can only figure that reason a manufactured crisis about the fragility of the 2nd Amendment is ginned up every couple of years is to drive some monies towards the arms manufacturers. Every time some type of slippery slope argument is presented revolving around gun control, guns and ammo sales shoot up a notch. Think of it as arms dealer welfare.

Of course, there is absolutely zero chance of the 2nd Amendment being repealed, or any form of significant erosion done to it. That battle was won long, long ago. As a result, we all just have to get used to the idea of a spree killing and mass murder every few years, and of course, the continual "collateral damage" of innocents and bystanders mutilated, maimed, crippled, murdered...

But what's a few bullets in the heads of a few babies between us well-regulated citizens?
Posted by John Kurman at 11:11 AM