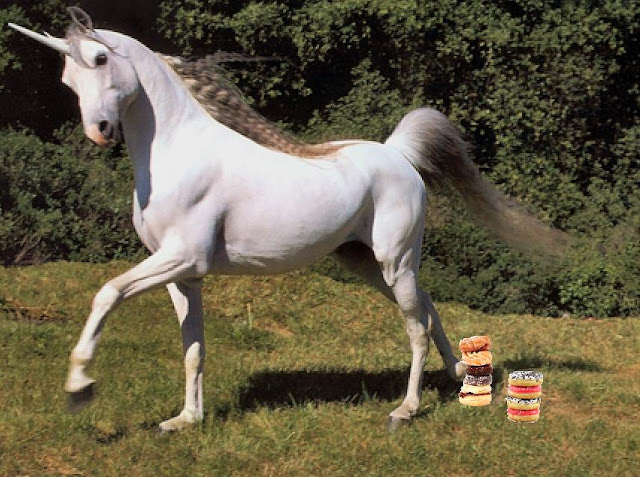 That's why they have the horn! Someplace to hold the donuts. So you can pet the unicorn and eat a donut. It all makes so much sense!

And so it is with so many systems of knowledge. Presented much as lawyers present their case. Seems all logical, just so long as you don't examine the assumptions too carefully. Ah, but once you do, it just all falls apart and is revealed for what it is. Superstition. Magical thinking. Voodoo.

Poor old James Gleick. I've read and enjoyed a lot of his books. Chaos: Making A New Science. Genius: The Life and Science of Richard Feynman. And now he has a new book out. Information: A History, A theory, A Flood.

I'm sure it is an interesting book, covering the works of such notables as Charles Babbage, Ada Byron, Claude Shannon, Norbert Weiner. Unfortunately, at least from this excerpt, it appears that Gleick has also been suckered into the cult of memetics.

How sad. To buy into the Just-So Stories for Little Children of Richard Dawkins. Dawkins makes a glib and vague comparison between stories, tunes, poems, images, tools, and inventions and his fundamentalist conception of genes. All of a sudden everyone is a robot ape, their empty little animal brains filled with a fiction called memes.

I really am amazed at how many otherwise perceptive and intelligent people have bought into this bullshit. But then, the same can be said for social darwinism, libertarianism, objectivism, marxism, all the other isms that sound good on paper, but never, ever work out in the real world - when confronted with real data.

And perhaps that is the only valid field of study for memes: lies, fictions, falsehoods, fraud, false attributions, misapprehensions about the world. Internet memes, requiring only the empty task of a brainless, mindless, stupidly repetition, seems the only true version of meme. These seem to be the only concept in which it applies. Primarily because, flying against all available contradictory data and god taste, these things manage to continue.

Of course, the world of ideas, both abstract concepts and concrete technology, is much more complicated than Dawkin's simplistic notions. I'm sure his stodgy old mind would love that all that messy data which is human culture could be jammed into the much more managable subset of biology. But then, one should be able to continue the process, and stuff biology into chemsistry, and thence into phsyics, and thus, ultimately, all of the silly little complications of being human can be traced back to the 2nd law of thermodynamics, and we are done.

Of course, we must ignore that the typical human behavior is not mimicry, but recreation. We must ignore the fact that the human brain - unlike a computer which is very, very good at copying - really pretty much sucks at reproducing things with any kind of fidelity. Human memory, animal memory just doesn't work that way. Which makes the idea of process of replication with modification as how brains work, wrong. Worse than wrong. Not even wrong.

And not because we have a hard time learning things (we do), but that we just can't stop messing with a good thing. You hear a joke, you make it your own. You see a design, you look for ways to improve it. There is a teleological aspect, a Lamarckian aspect, to human culture that a Darwinian fundamentalist like Dawkins would like very, very much to go away. But it won't. Quite simply, the concept of memes is completely stupid.

Think about this for a second. How many memes does it take to complete the category for chair. Or for the act of sitting down. Way too many memes. And which meme in yoyur empty little animal brain is it that selects the fitness of all the other memes? And do ants have memes. Because they sure do seem to use them when engaging in categorical behaviors such as making war, making slaves, tending crops, and domesticating aphids. So memes predate human brains? Were memes floating about in the red hot Hadean atmosphere of Earth, just waiting for Life to get started?

It's all just bullshit. It's magical thinking. It's unicorns... shitting... donuts.
Posted by John Kurman at 12:37 PM