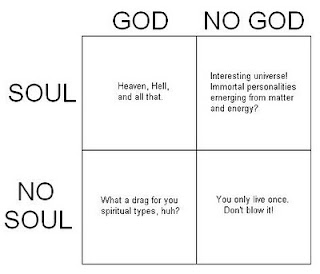 The Not Even Wrong series got off to a shaky start. Let's see if we can recover some before we go forward. Yesterday I was to Call Bullshit on mathematical platonism. Well, I think I'll need to move along several tangents to get there. So hang on a sec'.
A 2009 Gallup poll found that 44% of Americans believe that God created human beings in their present form within the past 10,000 years. Many of them also think the human body is perfectly designed.
My response to that is... Wow. That Is Really Fucked Up.
And Americans wonder why our nation is in decline.
I think anyone beyond the age of eight, or who uses possibly more than a third of their (God given?) frontal lobes, has to realize that it requires several convoluted explanations that just get stupider and stupider as they go along to get to the Flintstone Theory.
God created Man in His own image? Does God have a prostate? Well, God is a really old guy, so that sucker must have swelled up to the size of Wyoming by now!
Okay, enough funnin' around. The reason I brought up the Gallup poll result was threefold.
1) In order to talk about mathematical platonism, we need to talk about platonism. In order to talk about platonism, we need to talk about perfection. And possibly the divine. Or at least some realm in which perfection exists, which is what Plato was talking about. The realm of God, or the Gods.
2) We need to mention that Plato was Class II Stupid: in other words, ignorant (not, you know, Class IV Stupid: intentionally, willfully, and dangerously stupid like 44% of Americans). He, like Aristotle, or Socrates, or others before our time, was not in possession of facts that we have today.
3) My reaction is a subjective one. But our judgements tend to categories ranging along a spectrum of (if we are honest with ourselves) merely personal opinion to objective fact. Its a question of doubt. As such, I can Call Bullshit on something recognizing that it is merely my personal opinion, and that you might think otherwise (in other words, I have a doubt), to I have a personal opinion which I suspect is also an objective fact (I have only a small doubt), to I strongly consider my opinion to be an objective fact (I have no doubt). Please note, faith is not the polar opposite of doubt. I do not require faith to have no doubts.
So, let's say I consider the idea that "there is no God" an objective fact. I am under a burden of proof, of empirical evidentiary duty to back up this statement.
Why? Some people (atheists, but, you know, they already have a lot of fucked up problems, starting with an undeserved opinion that they are somehow smarter than other people) will try to cop out and say that I am making a negative statement (There is No God), and do not need to prove a negative. Oh, Bullshit. One of the fundamental principles of logic is the principle of Noncontradiction (something cannot be both true and false). The principle is clearly a negative statement, and is easily proved.
(I should note that my opinions about the existence of God, or the logically distinct and independent question of the existence of a human soul, is this: I really don't give a crap).
So, Oops! Did you read carefully bakc there a little while back? I said... the IDEA that "there is.. " etc. The concept. Why did I say that? Because any honest person will recognize that the objective fact regarding existence or nonexistence of a deity is not only not provable through logic or reason, we can neither establish it through empirical evidence. In other words, it is not only philosophically unsustainable, it is unscientific because it is not falsifiable.
(A dorky guy named Richard Dawkins dishonestly tried to say otherwise in his book "The God Delusion". Dawkins is, quite frankly and in my opinion, a douchebag. But that's for another time. Maybe).
So, all we got to talk about is the idea of something. Because it is an abstraction. If you want to show me an abstraction, that is outside of your head... hey, have fun with that.
More later tomorrow, hopefully. I gots to go do some work out here in the real world.
Posted by John Kurman at 7:26 AM