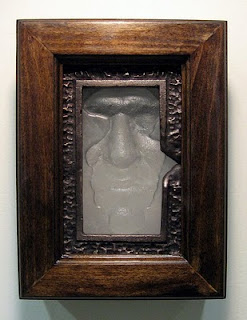 It used to be that when I would read an art criticism piece, one that was not contaminated with post-modernist prose, I would still say, "What the fuck are you talking about?" Over time, though, I finally realized that the critic is just riffin', just free associating on the work as if the whole essay were an exercise in dream interpretation. And so, whenever I've had to talk about a piece where I did not have something specific or concrete to say, that's what I'd do, just go with my impressions, and pull an improv using simple associations. Not quite up to Fred Willard's standards in free association, but enough to, yes, bullshit my way through an explanation without resorting to artspeak.
And so it is with this one. I actually thought at first I could get away with saying something about a fundamental feeling of overwhelming melancholy (because it is something I've been fighting for the past couple of months for reasons I'll not go into), but when I really looked at this piece, I realized, this guy is pissed.
He is severely pissed off. And at me.
He is severely pissed of at me for sticking him into this constraining pose and position. And I've really got to watch my back if I know what's good for me. I put him there, in that glass stasis or carbon ice, or whatever, and I'd better do something pretty fucking quick to get him out of his predicament.
And the best thing I can think of his to sell him as quickly as possible. (That would put a small dent in my melancholic mood for sure). The piece is cast glass, bronze, and wood. It is about 9" x 12" x 4".
I've pretty much run through this particular theme and material heuristic, and I've got nothing, absolutely nothing, in the way of new ideas. Not a damn thing. And the weird thing is, it's like, I've got all the pieces. I've got the data, I've got the connections. I've got the associations. I even have a hint of a pattern as to what and where I should go. I just need a thousand more brain cells, or a 50 point bump up in my IQ to get there. And that ain't gonna happen.
So I'm frustrated, and there's nothing I can do about it but wait. Now I know how he feels. You know, the guy in the piece called "Immersion".
Posted by John Kurman at 4:05 PM