The Empire of Dixie

I came home to a message on my answering machine from my doctor. I had a yearly physical last week, and I had blood tests done (even though my shit insurance will not pay for it - sound familiar?), and the doctor left the following message:

"John , this is Doctor ______. We found some abnormalities in your blood tests. I'd like you to call me today or tomorrow afternoon to discuss this".

He pulls this shit with me every year. Of course there are abnormalities. I eat badly, don't drink enough water, and besides that, I'm Scandinavian. And let tell you, 2100 generations of serious inbreeding can really fuck up your blood chemistry. So, I've got to assume it's usual medical bitching, but in case it actually is serious, then I need something to distract me, so....

Astronomers can "see" out to the cosmic horizon some 42 billion light years.  Using this number as the radius for a spherical volume, and applying the formula for such (4/3 * π * r3), and doing a small amount of arithmetic reveals that the observable universe contains some 310 x 1028 cubic light years, or if you like really big numbers, 630 x 1066 cubic miles.

And that's mostly empty space. If we are very generous, and assume, say, an average of a million earthlike worlds per galaxy, give all the observable universe some one hundred trillion galaxies, then there are some 1018 habitable worlds in the universe, which, if they were all uniformly distributed, gives you a habitation density of some 1 / 1048, and that is one in a quindecillion. And that is a very, very tiny number indeed.

I don't think there is any comparable ratio to this tiny number, but it really doesn't matter, because it turns out that - and I know this for a fact - that there are only nineteen earthlike worlds in the whole observable universe. 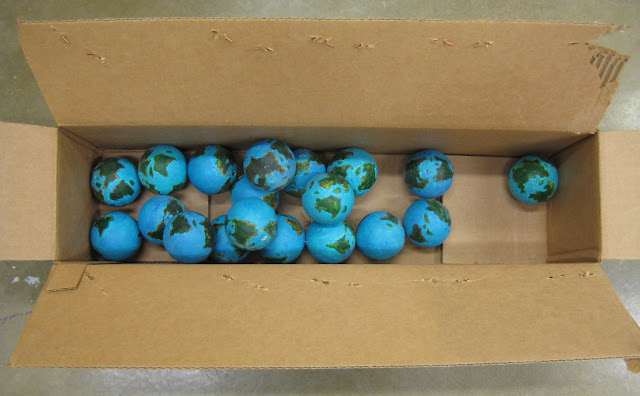 That's only nineteen worlds that humanity could be living on and not notice too much of a difference from living on the Earth. You know, blue skies, green grass, trees, sandy beaches, stuff like that. The animals only slightly different, but not enough to be alarming.

You'd think it would be a lot higher number, but no. And apparently it has something to do with ours being a double planet. And through an accident of history, one of those worlds is called Texas. And that world is the center of a space opera empire spanning a whole galaxy group, and that empire is known as The Empire of Dixie.

How'd that happen? Well, one of the first wormhole throats ever constructed was down in Houston, TX --- naturally. It was built inside the Harris County Domed Stadium, oh, sorry, the Reliant Astrodome, no, fuck it, the Houston Astrodome, after it was annexed by the Johnson Space Center --- naturally.

I guess a description is in order. At the former fifty yard line is an airtight sphere contained in a chiral two-layer geodesic metal skeleton some 150 feet in diameter. Up in the stands surrounding the inner dome, where countless baseball, football, and professional wrestling fans used to sit, is the world's thirty-fifth largest standing army, bristling with everything from futuristic railguns down to M-4 combat assault rifles, all pointed at that sphere. And inside the geodesic sphere is a smaller concentric spherical structure, consisting of tiered stainless steel catwalks, struts, trusses, ranks and ranks of boxes filled with exotic matter and  transmaterial generators (used to generate, you know, wormholes), even more ranks of banks of electromagnets,  particle accelerator tracks wound throughout like a giant ball of yarn, cables, stanchions, hoses, pumps, sensors of every kind and description, wires, yellow hazard signs, and throughout, like a swarm of fire ants, essential ground personnel suited up in space suits - every single one of them deemed expendable.

And then, within of all of that, on a day when the wormhole throat is open, everything is bathed in a Cherenkov glow, blue to violet radiation emanating from a shimmering soap bubble, some thirty to seventy feet across, that hovers above the ground. Soap bubble? More like a big crystal ball, with strange shifting visual aberrations at the edges, which give me a headache when I look at them, and if you can handle staring into the center, some other fucking place entirely. Weird!

Well, funny thing about wormholes - aside from the fact that they are hard to aim and the destination throat won't sit still - is that they open up through space and time. You know, spacetime?

And the people that went there? Lost forever in space and time, for all we can tell. Oh, they are out there someplace, somewhere, somewhen. You just can't seem to get back to them, not with the perverse vagaries of an uncertain universe surrounding us.

So, when the first wormhole was created, and what do you know? that wormhole throat opened up within the solar neighborhood of one of those nineteen worlds. And a fantastically gorgeous blue world it was, with a striking golden moon.

Some two months later, the grid beefed up,  hordes of potential colonists camping out throughout the greater Houston area, the wormhole was opened up again and - nothing. No world. No star. A completely different region of the universe presented itself, despite the best efforts of the theoretical physicists to target the original coordinates. Some fifty million people simply gone, lost out there in the universe someplace - a complete mystery.

The Kraken - naturally - solved the mystery. Soon after first contact, they mentioned an interstellar civilization of "you monkeys" occupied a galaxy some 60 million light years distant, out in the Fornax cluster. Turns out that was the world we had sent them to - only they arrived there some 13,000 years in the past, according to our calendar. The Kraken advised us to maybe steer clear of that region of space for awhile, at least until Earth had worked its way a bit higher up the slope of the technological plateau.

But the Kraken did show us a video of that lost homeworld. Still blue and gorgeous, and with the night side ablaze with city lights. And a large sublight dreadnought can be seen warping up from the planet to interdict the Kraken ship.

And the golden moon? In waning gibbous phase from the point of view of the video. But on the darkened side of that moon, looking for all the world like a neon sign in a diner window: