For some reason lately, I've been having these dreams that, for lack of a better term, seem to have a metaphorical draw towards class warfare. Now, I myself have about a 50/50 work experience between white and blue collar jobs. And in the dreams I'm pretty much a working class hero, with, at various times and guises, my antagonists being upper middle or ruling class assholes. And the things, these snobbish assholes who treat me with disdain in the dreams are not quite human. Not primitive subhuman, but more like, soft, squishy, chinless, pale, pudgy, and puny, dressed in gaudy country club attire. More like uncanny humanoids with Mafia-style bad taste than subhumans.

Well, surprise! The on-line magazine "The Atlantic" has a fun little article entitled "The Uncanny Valley: What Robot Theory Tells Us About Mitt Romney". I know I'm not the first to notice the metaphorical comparison. I'm not even the first to refer to him as the Romneytron 9000 (or some variation thereof). It's not really fair to call Romney a robot. Of course he's human, unless....

Unless the Mormons are actually a time-traveling conspiracy, spanning the ages to complete the total and utter subjugation of all humans throughout time. Then a case can be made for Romney the Robot. But of course that's all bullshit. I mean, if they was a time-traveling organization, we'd all be Mormons now, unless they are slowly losing the timewar... I'd have to review my temporal physics class notes...

... anyway, the article goes into more length than I would care to cover in explaining the whole Uncanny Valley theme, and Romney's apparent image problem. So you just go read that link, and I'll wait.

Done already? Fucking A! You know the one thing I notice is pretty much the whole Republican field fits somewhere on the human familiarity curve. I went ahead and borrowed the graphic from that article, and modified it to suit my observations. 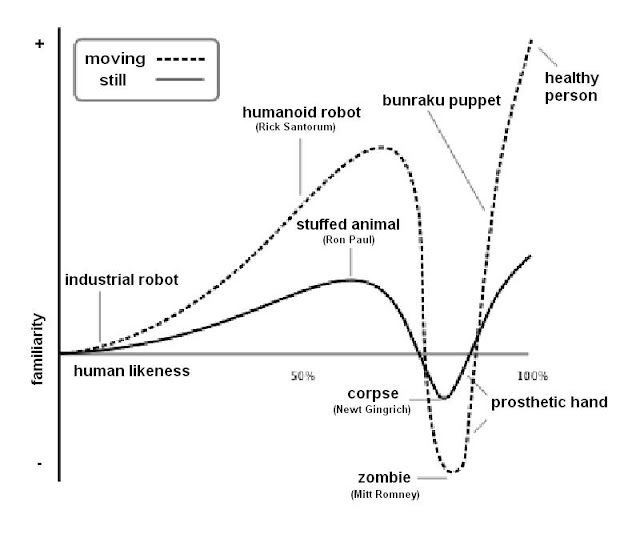 So, yup, there's Romney, alternately deer-in-the-headlights while his brain processes, processes, producing some awkward behavioral output, or, yes, some genuine human emotion there, but restrained by arcane Harvard mental trainings. Almost Spock, but not as human. And no, not even that, Obama gets the Spock award, for "No where is he more desperately needed as among a shipload of illogical humans".

Then there's Newt Gingrich, who gets the animated bloated corpse title, and enough said on that.

Ron Paul. Can anyone find me a picture of him where his mouth doesn't look like a puckered asshole? I mean, yeah, he does have some muppet qualities, but that just makes me wonder whose hand is up his ass?

Santorum? Goddamn, that fucking Mr. Sardonicus rictus he calls a smile is just fucking creepy as hell. It's more reptilian than anything else.

So there you go. The rest of the field that dropped out or never joined? Who gives a shit. They're losers.
Posted by John Kurman at 9:34 AM