Word on the street is the US Air Force Space Command is throwing SETI a bone - supplying monies so they can check out Kepler-22b. You know, Kepler-22b? The superearth orbiting in a G type star's "Goldilocks zone" some 600 light years from here? Uh? Superearth? A radius 2.4 times that of the Earth's? Goldilocks Zone? Orbiting the star where liquid water is possible on the surface of the planet? You are keeping up on the science news, right?

So, the idea is suddenly this is Earth's twin and there could be life there. Provided, of course, this planet has the right mass, which we can't tell.  I mean, it's fucking amazing that they can tell how big it is, from three thousand five hundred twenty-six trillion miles away. (No, really, don't let the budget "crisis" fool you, that's a big fucking number). But what they don't know is the planet's mass, because it could be, like some health-conscious German stool inspection category: watery, gassy, or solid, which is to say, rocky.

Now, if it is watery, it can't have too much water, otherwise it will undoubtedly have an ocean several hundred miles deep, and at the bottom of that ocean will be a peculiar form of pressurized ice. And that's not a good place for terrestrial life to form. Then again, if it is rocky, then with the radius being what it is, it is more likely a big super Venus, and that's no place to hang out. And if it is gassy, then it is a mini-Neptune, and again, no place you'd want to spend time at.

But, what the hell, SETI needs a new pair of shoes, and if they get to use their radio telescopes to check it out for Space Command for "space situational awareness", then why not? I can tell them right now, save them some time, that nope, nobody home. No life. Just like Mars. But hey, whatever, better to spend the money on that than tax breaks for job creators, which has done us Earthlings so much good.

And, you know, Space Command kind of reminds of Alpha Control from the old "Lost in Space" TV series. The series was just so hokey, not serious the way Star Trek was, but looking back, I suspect they had a better take on all things alien out there. Which is, if they are out there (and Where Are They?), they really don't give a shit about us. I mean, every time the Robinson's ran into a technologically superior alien race, which was always, the aliens were about as happy to see them as you are a homeless person wanting to wash your car windshield. 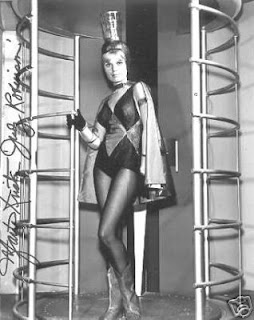 But honestly, that's the way it was, well, that and fuses had been invented so you didn't have sparks flying over the place whenever the power was turned on. But, hey, cut Irwin Allen some slack. I hear he was as bugfuck crazy as Mickey Rooney). And all the space alien babes have super powers and wear capes.

Anyway, Kepler-22b. Nothing there. Okay. Nothing. Except, oh, maybe the Bugs.
Posted by John Kurman at 4:17 PM