The Revolution That Almost Wasn't (Part 2)

As I sit upon this bar stool in air-conditioned splendor, in a wondrously ergonomic and aesthetically pleasing building on a heart-achingly beautiful world circling a fantastic star some 450 million light years distance from the planet Earth, here in the year 2011CE, I've to wonder how all of us, each of us, could have been so fortunate to live in the Best of All Possible Worlds. As I sit here, dictating notes and examining the might-have-been and could-still-be scenarios through a very clever device wrapped about my head (looking for all the world like a metallic hairnet, and giving me the appearance of wearing an aluminum afro), I note, for good or ill, all, the fleeting phantom pasts and futures competing for existence to become objective reality.

Some scenarios are quite horrifying for being extremely unpleasant, others even more horrifying in their impossible perfection, but here everything is  just right. Yet, it didn't necessarily have to be that way, for, as I said before, the Glorious Revolution of 1877 may not have happened.

Throughout the 19th century in the old US of A, there were hard times indeed, but few would find things harder, or stranger than the period of industrial expansion following their Civil War. The entire maximum effort of the country, far more than had been expended in the war, was devoted to the massive project of railroad building. Even within the confines of the Northern Union the primary focus was upon the expansion of rail into the West. This all, almost as a side note, while opposing a Confederacy fighting for its very survival. And few could understand the impact of the rail. Along with the telegraph, it threatened the destruction of time and space itself, the boundaries of which were shattered from human into inhuman dimensions. In the case of the telegraph, information moved the speed of a horse to the speed of light. With the advent of the rail, the pace and pull of an oxen was replaced a thousandfold by giant steel monsters. America would have to wait for the atomic age to see a similar leap forward.

And all this came at a disastrous cost. The people of America, with industry already straining the sinews and bones of society, the rich sucking the blood and fat from the workingman, were barely able to keep up with these inhuman demands. People were breeding at the biological maximum. A flood of immigrants, stemmed by depression and war, was unleashed. Despite the expansion, jobs were parceled out by the miserly rich, to save costs and increase productivity. In an effort to make more and more monies, the situation for the average laborer was constantly deteriorating. The railroads, growing despite the woefully incompetent and criminal behaviors of the tycoons that ran them, were constantly in arrears in wages. In bad times, the first impulse of the parasitic rich was to cut the already abysmally low wages of the laborers and producers, while continuing to enjoy enormous salaries and issue high dividends to impatient investors.

Such a situation could not last. And so, with the long accumulation of grievances towards the wretched plutocrats that employed them, the American workingmen finally had had enough. In July of 1877CE, the Baltimore and Ohio Railroad notified its employees that it would make substantial cuts in their wages. For men barely able to feed their families on the existing pittance, emotions quickly ran the spectrum from despair to rage. On July 16, the date railroad wages were to be cut, at Camden Junction near Baltimore, Md, the workers walked out. Their strategy was to halt all freight traffic. Soon, other workers in Baltimore, both union and non-union, joined their ranks - canalboatmen, canmakers,  boxmakers, and sawyers among them. The strikes quickly spread to Philadelphia, Pittsburgh, Columbus, Cincinnati, Syracuse, Albany, Buffalo, St. Louis, and Chicago. The governor of Maryland called up state militias to deal with the mobs. The 5th regiment, the "Dandy 5th" opened fire on men, women, and children at Camden Station, but the shops and warehouses of the B&O remained in the hands of the mob.

This was alarming enough. News from Pittsburgh did not help. Rumors that the officers of the Pennsylvania Railroad were forcing a freight train through the blockade there brought out a crowd of 10,000. A number of Philadelphia guard units, composed of the city's socially prominent young men, opened fire on the crowd with two Gatling guns. As reported by the New York Herald, the soldiers ceased firing revealed such a sickening sight of men and boys "writhing in their death agonies... with a number of children killed outright", resulted in the Pittsburgh militia throwing down their arms and joining the crowd.

The flash point, the turning point, occurred in Reading, Pennsylvania (and notice we have all the railroads on the Monopoly board, save the Short Line, represented). The state militia, composed of the 4th and 16th regiment, with no provocation, opened fire on an unarmed and peaceable crowd in the middle of the city. The 4th, composed of the so-called Easton Greys, another of the "gentleman" units from Philadelphia, was particularly brutish. The 16th revolted and joined the mob.

News of the slaughter of civilians soon reached Washington. President Hayes ordered federal troops into action. The Army, practically all Civil War veterans, refused to a man to engage in violence against the people.

"No amount of property is worth taking another innocent life" declared General Winfield Scott*. What had started out as the most lurid and violent riot in the history, quickly evolved into armed insurrection, and then finally coup d'etat. The Glorious Revolution was upon them. The plutocracy was no more. A national convention was convened, the 18th and 19th amendments added to the Constitution. A far more fair and equitable nation was born.

The interesting thing to note, some few years later and afterwards impressed into the New Business Philosophy, was that, under the citizen committees and action groups, the railroads during the strike were better run and managed than under the old bosses' network. This soon resulted in the "wisdom of crowds" political philosophy, the People's command economy, the open-source method of management and manufacture, and, naturally, the Free Education movement. All these in turn resulted in the realization, some one hundred years later, that "It", the collective consciousness of the superorganism known as Man, had actually been in charge all along. And in different circumstances, things could have gone much, much, much, much, worse. 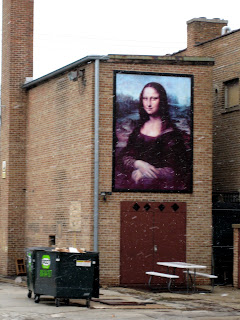 From Spiral City, Bottoms up, My Brethren and Sestren!


*Note: In the majority of scenarios, General Scott said no such damn thing.
Posted by John Kurman at 11:40 AM